A couple of weekends ago some of the members of the Ancient and Vulnerable St Deny's Sailing and Rowing Club took a trip downstream to Ashlett Creek. It was their sailing club's annual regatta, to which they had invited the Drascombe Association of which we are members. So it was like being invited to a party held by friends of a friend. 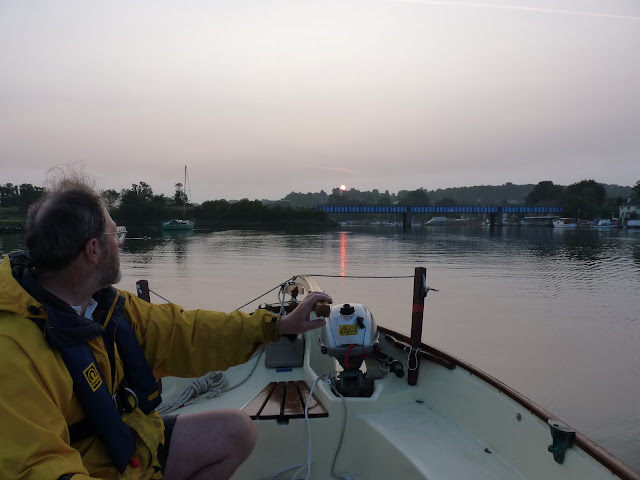 We set off on the tail of the tide at around 5.30 am. A beautiful morning with hardly a whisper of air, so we motored out under the Itchen bridge then set sail for a very leisurely drift down stream. We weren't in any hurry as Ashlett is very tidal and we would have to wait until 2.00 pm for enough water to get in. 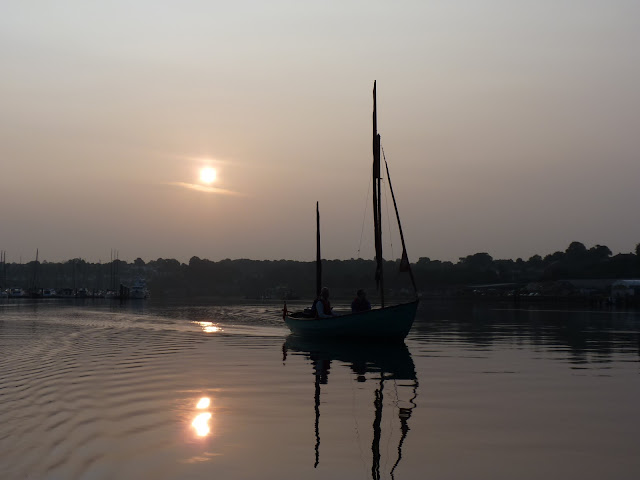 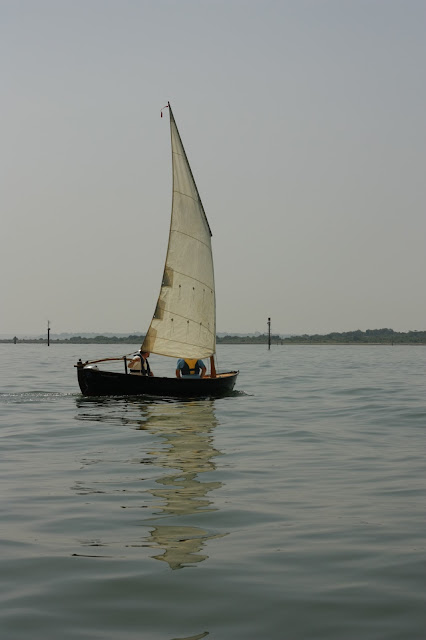 We sailed up into the Hamble River for second breakfast and to pick up one of our party who had decided he'd rather miss the dawn and laze in bed. 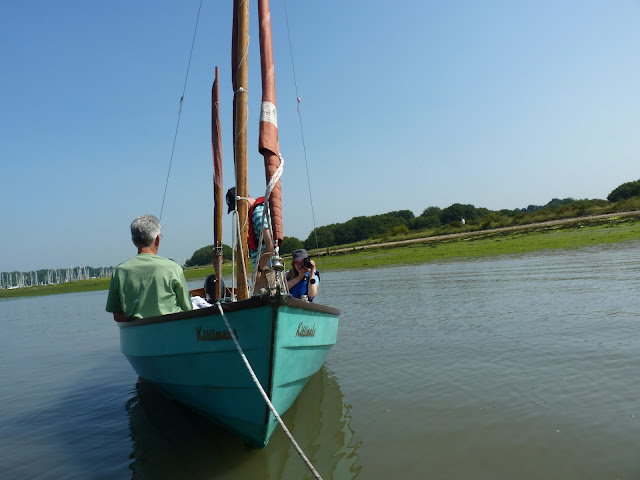 Captain Bill took the opportunity to have a snooze. 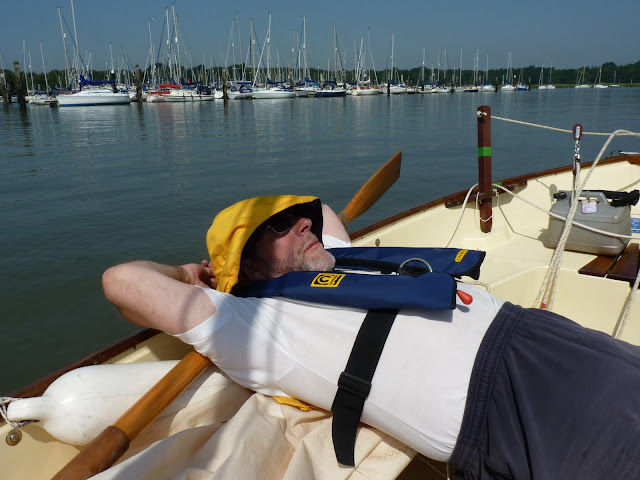 Ashlett Creek is a super little place which is very picturesque if very tidal. It is squeezed between the Esso Oil Refinery at Fawley and its close cousin the oil powered power station. Thankfully once you are in both of these are largely invisible. 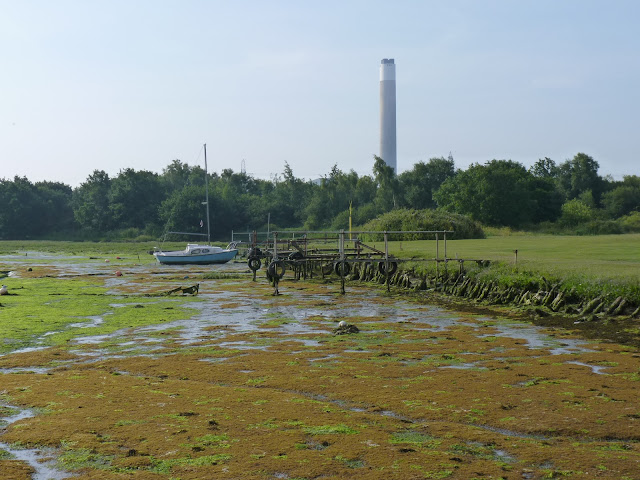 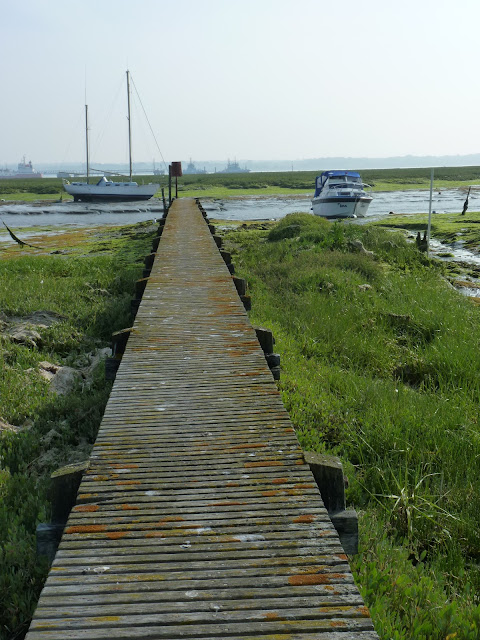 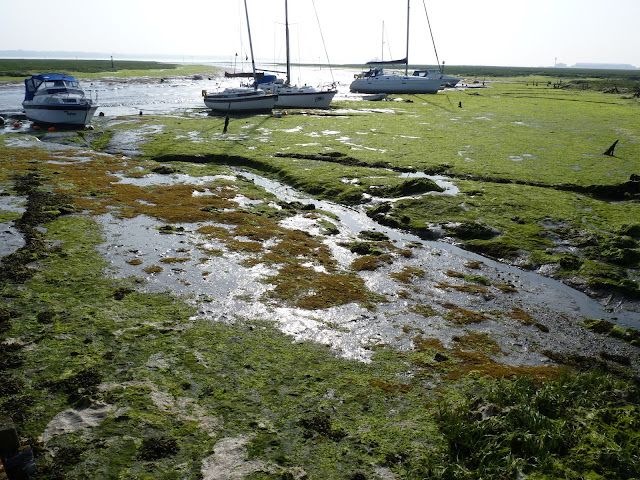 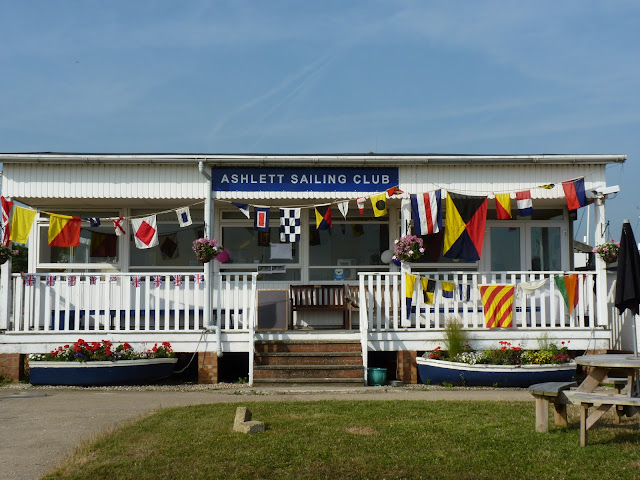 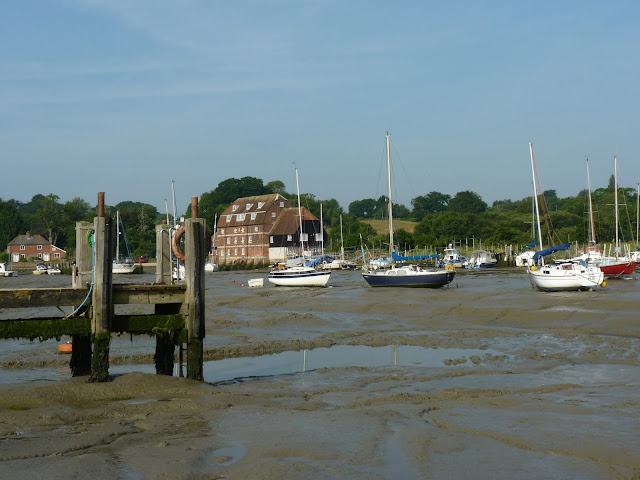 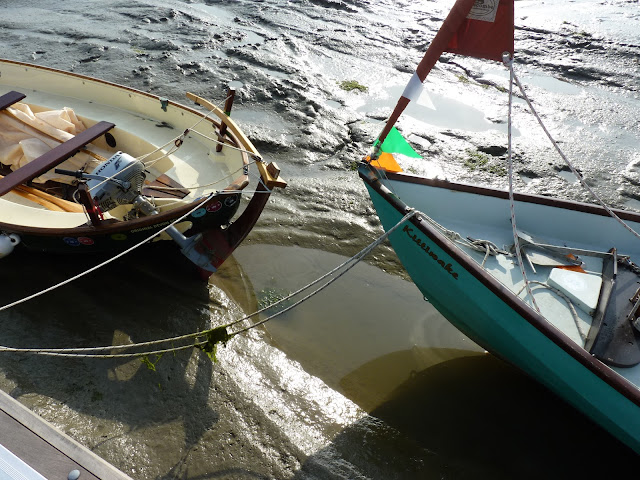 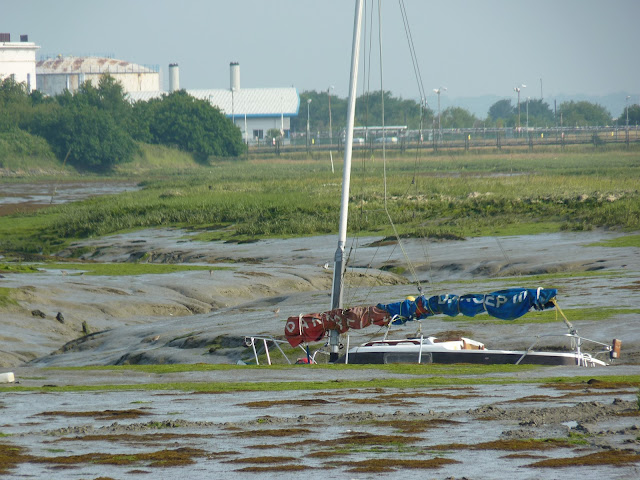 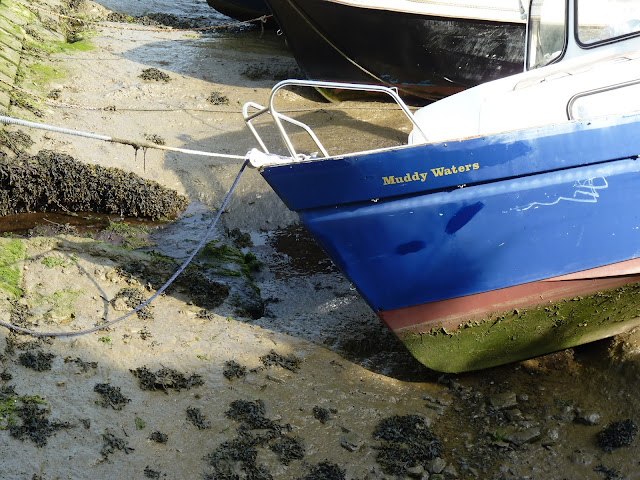 Did I say there was a lot of mud?

On the way home on Sunday the wind picked up and we had a great sail. I was very impressed with the performance of the Scaffie which pi**ed all over the Drascombe Lugger and even managed to keep up with the Long Boat Cruiser belonging to John, one of our members.
Here he is dodging the Isle of Wight Ferries 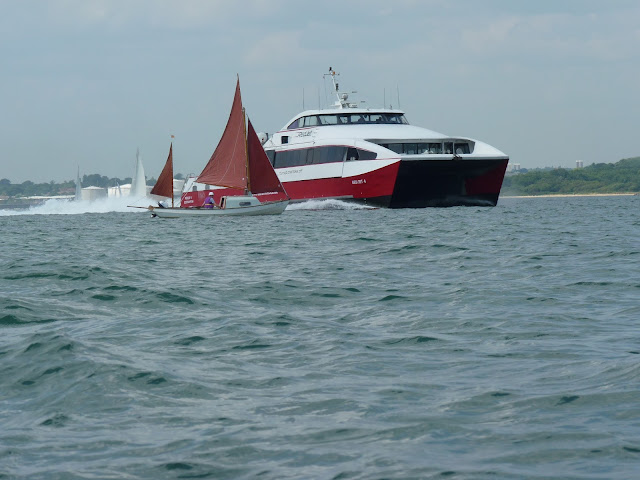 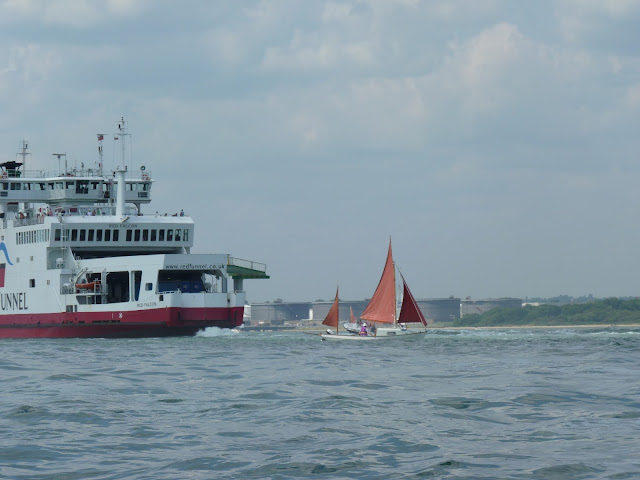 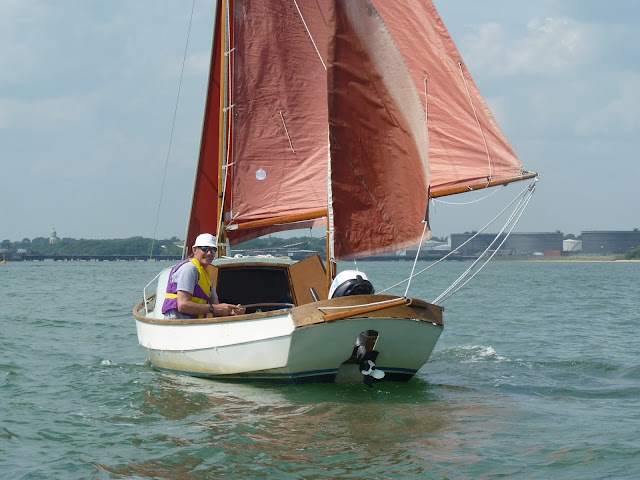 And now ladies and gentlepersons;

I give you the Ancient and Vulnerable St Deny's Sailing and Rowing Club Pantomime Horse Caption Competition. 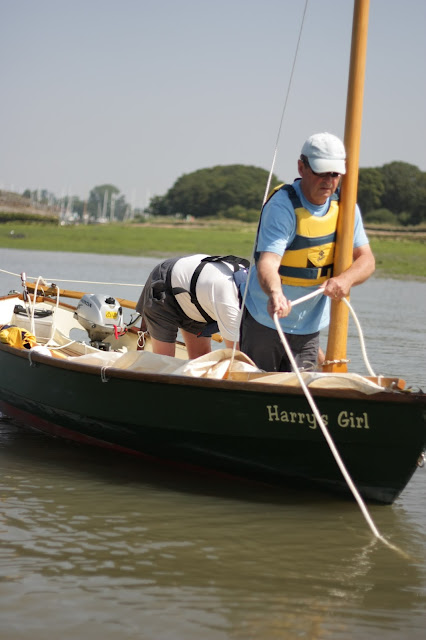 No I don't know either! 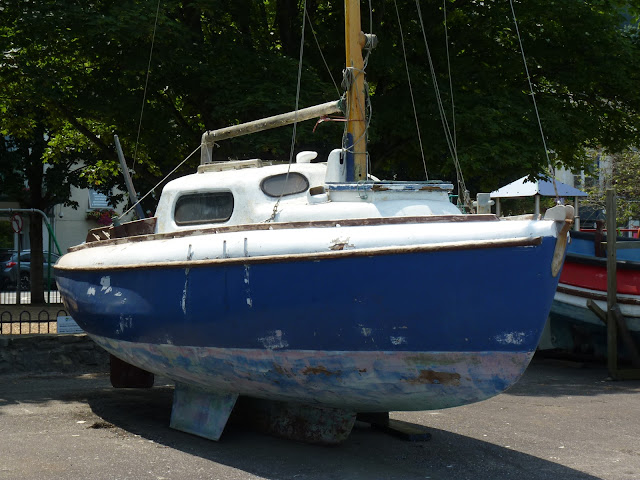 We've just had a few days on The Gower Peninsula in Wales, and on a day trip to The Mumbles I came across this little lovely.
Now beauty they say is in the eye of the beholder and I have to admit she's not pretty but she is interesting. 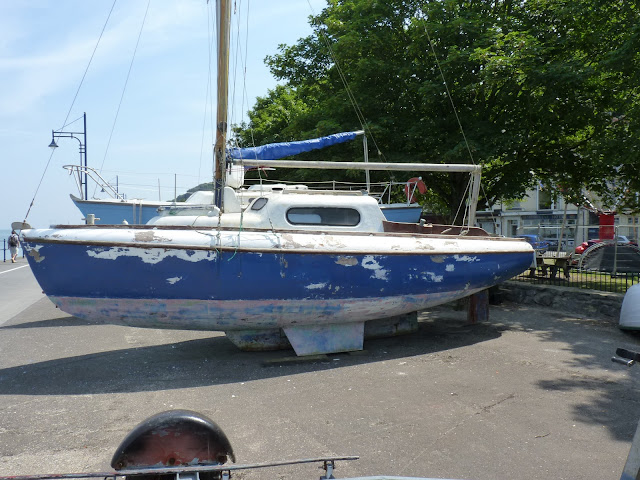 The boat has seen better days but appears to be fairly (Fairley) intact and could be renovated by a persistent and  loving owner.
So what is she? She has the distinctive rounded shoulders and slight reverse sheer of a Fairey. The hull at least seems to be hot moulded which would also fit, but I think the cabin top is GRP. 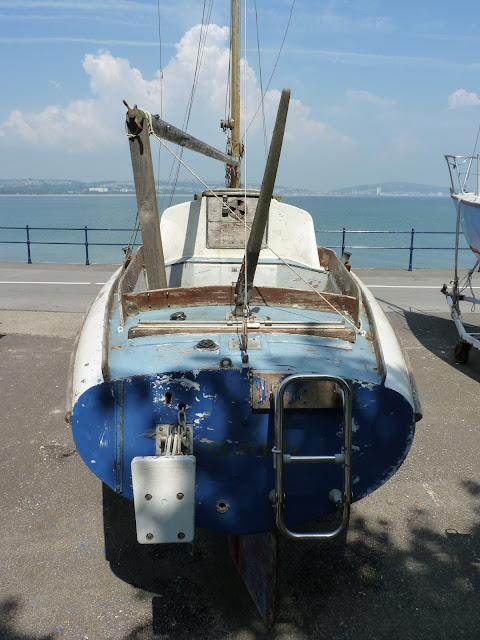 Too small to be an Atalanta she is the right size for a Fulmar 20, but she seems to have a different coach roof and an internally hung rudder instead of one mounted on the transom. 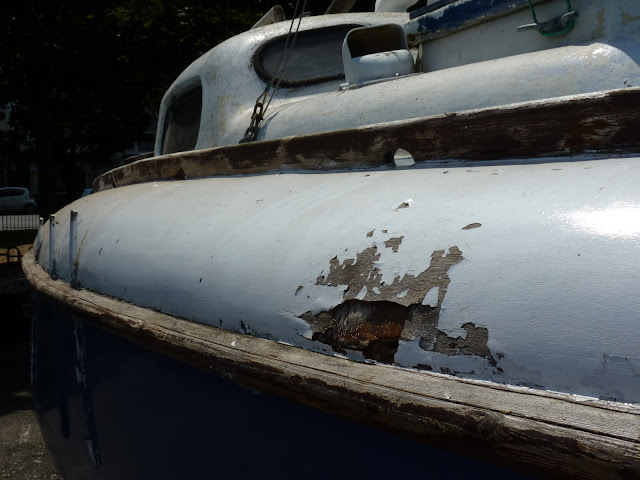 Answers via the comments box please.

She's at that stage where her future is in the balance, restore to former glory?  or cut your losses and cut her up?  I hope she is saved, just because I like quirky, and she's nicer than many of the old fibreglass tubs still floating around.
at July 20, 2013 5 comments:


You will remember the dreadful tale of Inwe  and how she was rudely shunted from behind by a Turk driving a German Truck in Belgium en route to The Netherlands. Or some permutation of some or all of these countries.

You'll also remember how Richard Rooth was colluding with Iain Oughtred to rebuild her, or at least a close facsimile. 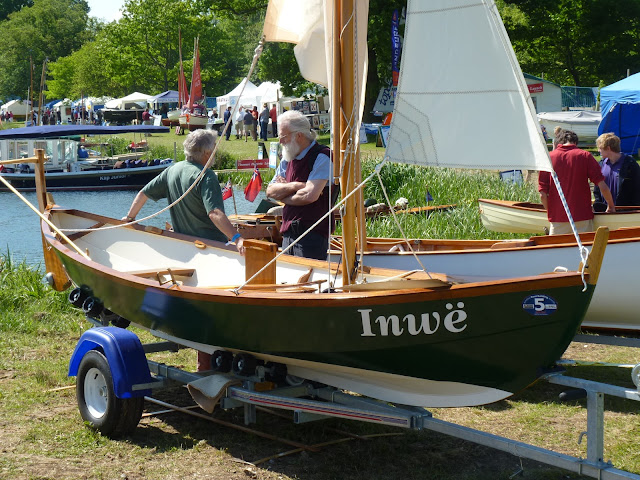 And here she is, a slightly stretched version of Iain's  Faering proudly presented at Beale Park. Various bits have been salvaged from the original Inwe and incorporated into the new boat.

Richard tells me he has another project well under way, and I'll be very interested to see it completed, he likes to keep things close to his chest so for now I'm hoddi'n ma wheesht.

Also keeping the HBBR end up at Beale was Steve Brown who brought along this very nice little Sassafras 12 Canoe called Wye Knot, and indeed why not. 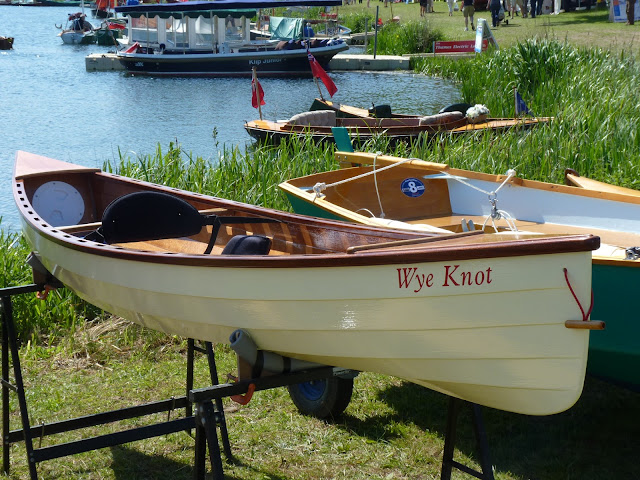 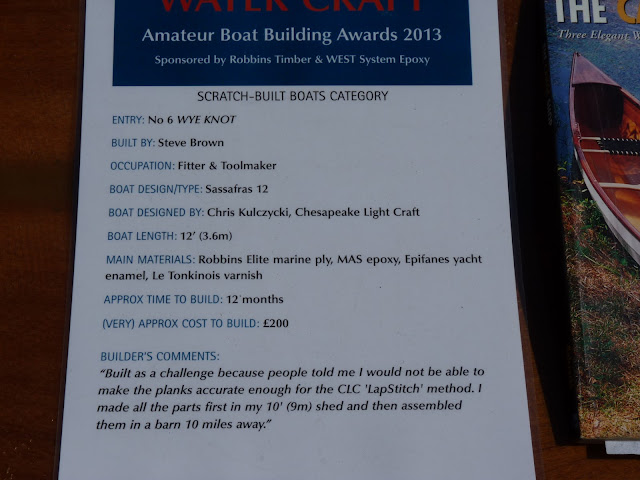 Steve took home the prize for the boat most likely to encourage others to build.
Well done to all.

All the Nice Girls Love a Sailor.

Beale Park Boat show is gradually changing from being the type of Boat Show where you would go to choose a boat, think Earls Court, Southampton, Excel etc. into the type of Show you would go to watch for entertainment and which happens  to have boats in it.

No doubt the reasons for this are complex and multifarious, the organisers are as ever looking for maximum footfall at the turnstile, while the exhibitors of small boats are looking for serious customers, not lookers and sookers as my mum calls them. Living close to Southampton I know that it's boat show is heavily advertised as a grand day out for all the family, but I'm sure the purveyors of multi-million pound yachts would settle for just one family providing they can afford the price-tag.

There now seem to be fewer boat builders at Beale than in previous years, where can they all have gone,  has the recession done for them?  Well actually it appears some of them have  gone to Southampton where the Wooden Boat Traders Association have set up camp smack bang in front of the main entrance for all the world and his uncle to see, no doubt in the hope of attracting some real buyers, and jolly good luck to them all.

So Beale does its best to lay on an eclectic mix of entertainment for all the family. There are craft and food tents selling gee-gaws, trinkets and inedible liquorish for those partners and other-halfs who aren't so nautically minded. A children's play area with the ubiquitous bouncy castle, climbing towers, archery lessons, etc. to keep the little blighters occupied. A beer tent and various food outlets cater for the more basic needs, although it was noted with some anguish that the Cornish Pasty Van hadn't made it this year.

For me the Irish Dancing and Steel Band (mercifully not at the same time) are a little intrusive, and the Newfoundland Rescue Dogs seem to hog the lake just when everyone else wants to use it.
To quote one of our band of brothers "I don't bring my boat to a dog show so why do they bring their dogs to a boat show!" No prizes for guessing who.......................

Much of the nautical interest is provided by the various clubs like the Old Gaffers Trailer Section, Dinghy Cruisers Association, Thames Traditional Boat Society and so on which does make the place a grand get together for boaty types of all sorts except those who enjoy large expensive bits of plastic. They even let the HBBR in and we are gradually becoming more established.

One new group this year were the Historical Maritime Society who brought their 23ft Frigate's Launch which was hard to miss, as it pirouetted around making a grand show of waggling its oars in the air. Chris Partridge reported on it in Rowing for Pleasure, but what could easily have been missed was the other boat they brought along. 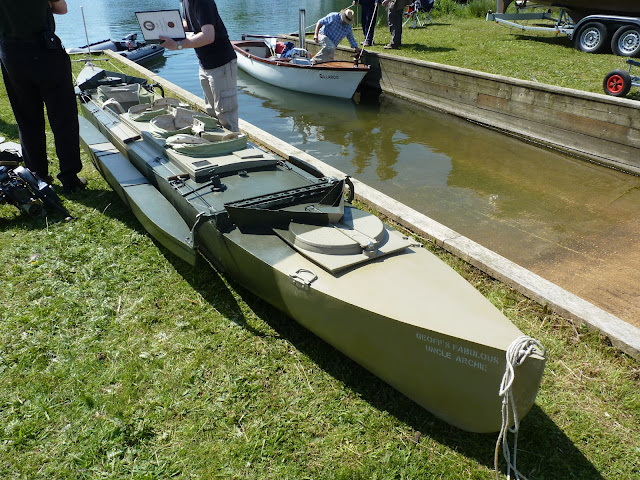 This is their WWII Mk 8 "Cockleshell" Motorised Commando Canoe, which goes by the name of "Geoff's Fabulous Uncle Archie".

Isn't he/she/it  brilliant!  I can tell you Katie Beardie was getting quite hot under the waterline at the very sight of it. Built to carry four Commandos, it can be propelled by paddle, a lateen sail using the extendible outriggers, and even by its own purpose built outboard/inboard engine. 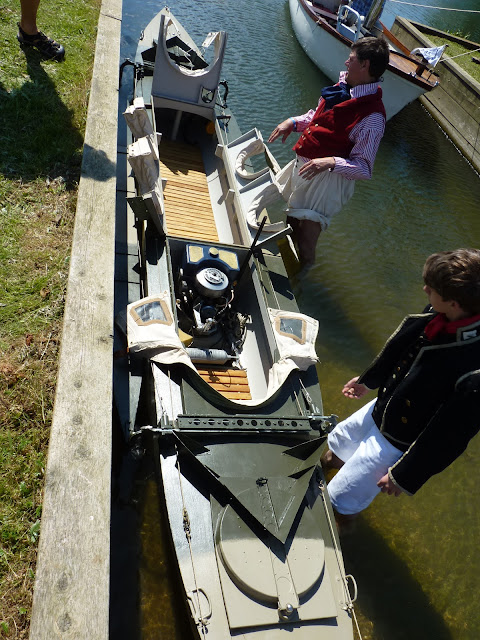 The rearmost occupant, the stoker, sits with this engine between his legs, which will no doubt keep you warm in the winter but must get very hot, noisy and smelly the rest of the time. 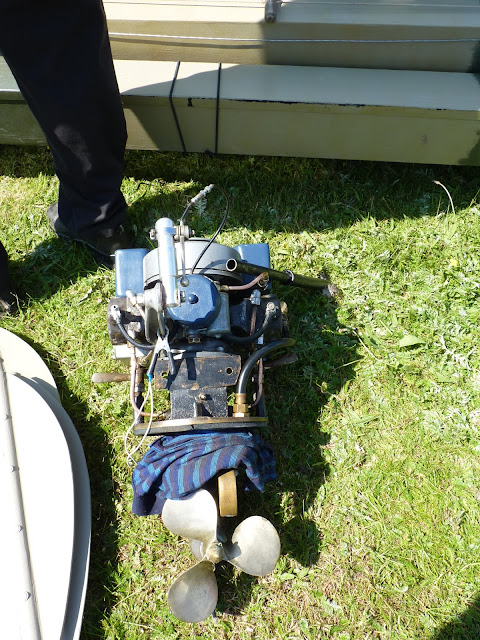 No wonder he keeps a fire extinguisher handy. 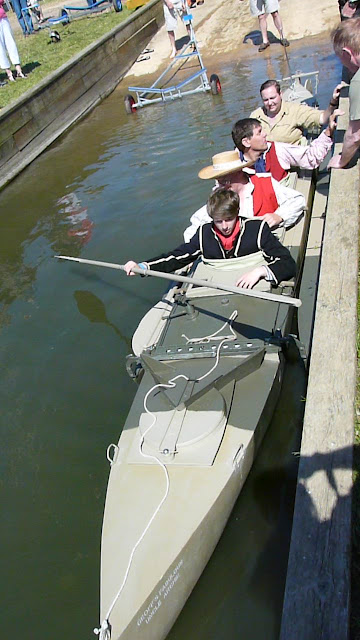 The observant will notice an element of cross dressing amongst the crew. They'd just disembarked from the 18th century Frigate's Launch in all their finery and decided to take Uncle Archie for a spin.  Here they are in their proper WWII drab the following day, complete with Bren Gun. 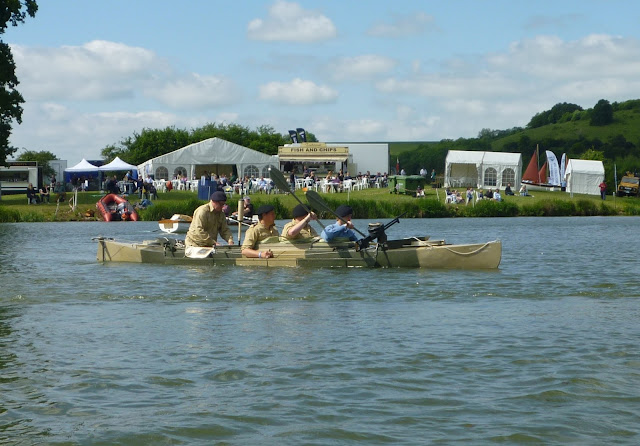 It would have been wonderful to take Uncle Archie up the Kennet & Avon with us.