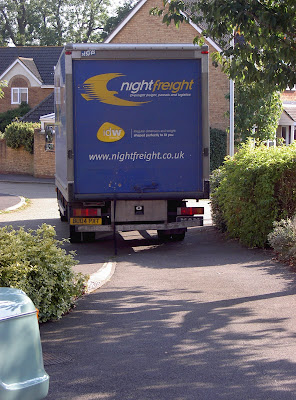 Guess what arrived today! I've been like a kid on Christmas eve all day. Alex phoned on Wednesday to say the kit had been dispatched and would be here on Friday so i dutifully took the day off. I cleared out the garage, (anybody want to buy a tandem?) and dragged the old building frame out from down the side of the house. This has been out in all weathers since I launched Caitlin but it is tannalised, so apart from a few dead spiders its not too bad. It had warped a wee bit though so its taken a bit of fiddleing to get it straight (ish). 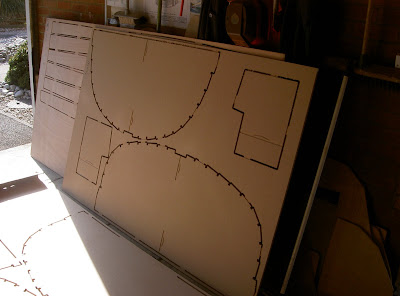 The Kit looks great just like an enormous balsa wood kit from childhood. And just like childhood I had this really strong urge to start gluing bits together without looking at plans or instructions, usually with disasterous results. Alex' paperwork hasn't arrived yet so next week should see the start of scarfing up the planks but in the meantime Port-na-storm has never looked so tidy. 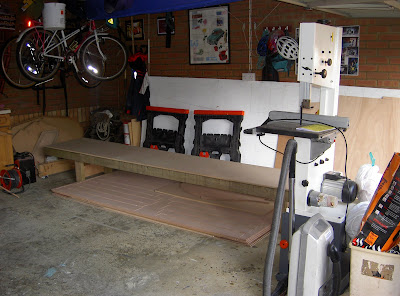 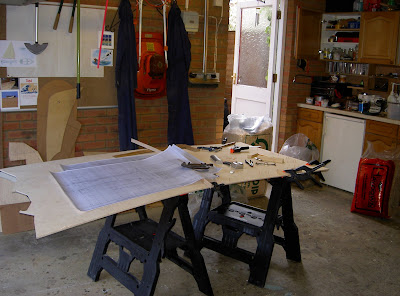 I can pretty well guarantee that I will never forget the day the plans arrived from Andrew Wolstenholme, yes I was pretty excited to get the tube through the post and pour over them but that's not the reason. It was also the day when I found out I was going to be a grandad. Now of course normally this would be a happy occasion worthy of a drop of sherry, however mum to be is a mere slip of a lass and dad is still a bit wet behind the ears, to say it was unplanned and unexpected is to master the British tendency to understatement, something I've never been guilty of. I'm afraid the Celtic blood in me won through so I was sent out to the garage to rant and rave for a few hours.
I did manage to use the time fairly usefuly, desperate for something to keep my mind occupied I decided to start marking out some templates onto some birch ply I had lying around. Within a few hours I had templates for the rudder, stock and centre board as well as the transom. I later discovered that i'd made a complete botch of the rudder and had to do another one. 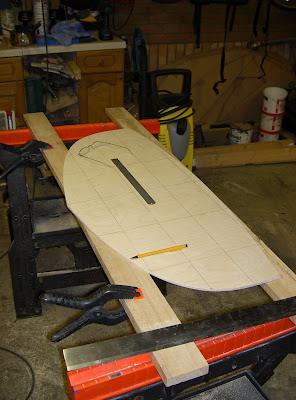 All around this time I was still not totally committed to building Coot. I'm in no doubt that she is a truly beautiful design but I did have doubts in my ability to build her. Looking at the plans I realised that Andrew leaves the builder to line her off and decide where the clinker planks should run. This was turning into a bigger task than I had imagined so decided fairly quickly to go for plan B. I would order a set of planks from Alex Jordan once he had completed all the CAD work, which he reckoned would be about September. But in the meantime I could be getting on with all the other bits......
at September 23, 2008 No comments: 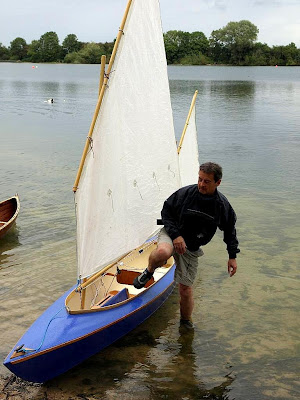 The stalwarts of the HBBR braved the bleak summer weather to meet up at Cotswold Water Park for what has become an annual fixture on the Calander. Full details can be had on the UK-HBBR link. The weather wasn't exactly brilliant but it did stay mainly dry on Saturday and a bit better on the Sunday. Unfortunatly there was a very noisy Corporate Event in the next field which went on until 3.30am. Then the Triathlon which was happening on our site kicked off at about 7.00am so it was a very bleary eyed group who gathered around the shore on Sunday morning. 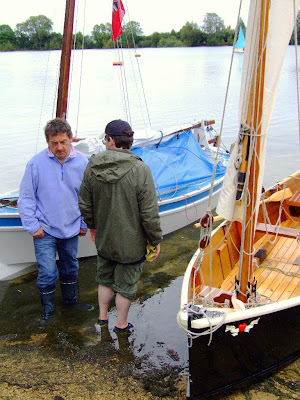 Being without a "proper" boat I took my canoe variously known as B&Q, Polythene Pam, etc, and I must say had great fun pootleing up and down the lake. Sailing conditions were just about perfect with a nice gentle breeze blowing across the water. The canoe was a bit reluctant to tack, getting caught in Irons a few times, some felt that the dagger board is a bit too far forward, so the R & D dept will have to look at that during the off season. It should be a fairly busy winter as I've ordered the Coot kit from Alex Jordan and its due to arrive on Friday. I'll try to record progress on the build a bit more frequently than of late. 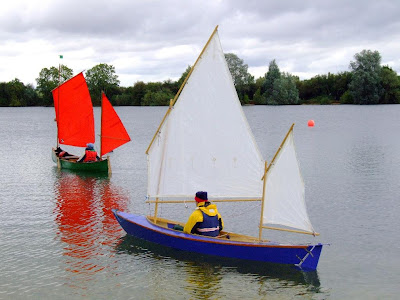