My friend Cee Dubbs brought his pocket gaffer Tit Willow ( Tee Dubbs) along to Cobnor. This famous little boat was designed by Chris himself and was originally intended as a half size prototype for the 30ft Steel gaffer he intended to build.
She was built in Oman, brought home in a container and featured in Water Craft magazine.
I managed to cadge a sail on her while we were there, the plan was to head for Emsworth for cream cakes, which seemed a great idea.
Tit Willow performs like a boat twice her size, she weighs in at a ton and a quarter, Cee Dubbs likes ballast, so there is nothing flighty about her although she is as nimble as your maiden aunt doing the palais glide when tacking out through the moorings. It really is amazing what he has packed into a 15ft hull.
I'm sailing on her again this weekend, doing the Old Gaffers Solent race from Cowes to Lymington.  I'll join her at Dell Quay in Chichester harbour on Thursday evening and we'll sail round to Cowes on Friday. Saturday is race day and we have to leave Lymington at 3.00 am Sunday to get back in time for Chris to work on Monday.  I'll let you know...........
While out on Tee Dubbs we took a detour up Thorney Channel where we saw Ocean Pearl riding at her moorings, She was built in Scotland as a motor fishing vessel and restored and converted to sail by Nick Gates. She is nearly a Zulu, apparently a true Zulu would have had an even more raked stern post but with the advent of engines, stern gear, propellors etc the designers and builders had to make them less rakish. She still looks pretty amazing to me.
You can read more about her here.
http://intheboatshed.net/2008/01/12/ocean-pearl-zulu-fifie-or-baldie-jay-creswell-explains/
at August 16, 2010 No comments: 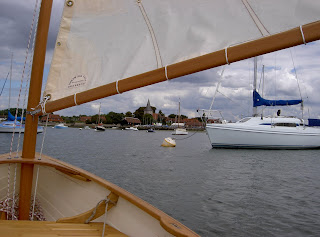 The Dinghy Cruising Association had their annual camp at Cobnor last week and the HBBR were invited along as the membership overlaps quite a bit.

It was a great week of camping, and sailing around Chichester Harbour.

I had to insure the boat before going so I needed to give her name, our pet name for our grandaughter is baby bunting so ladies and gentlemen I present Bunting.
Monday was a lovely day with just the right kind of breeze so I took her out for a jaunt, firstly up to Bosham Quay.
I then went over to Ichenor to the harbour Master's office to get my licence for the week, a whole £3.40.  Just as I was leaving Itchenor the wind became very light and as the tide was flowing in rather quickly found myself sailing backwards for about an hour before the wind got up enough to get me home. 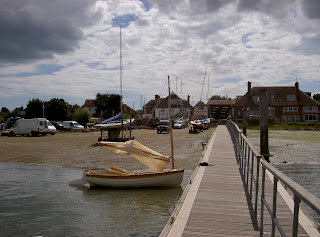