A short pictorial record of the 2012 Thames Raid .

Here we see Tim O'Conner having a wee tipple to celebrate the launching of Zelva his self designed Super Camping Canoe  apparently launched for the first time, which shows supreme confidence or stupidity, you choose! 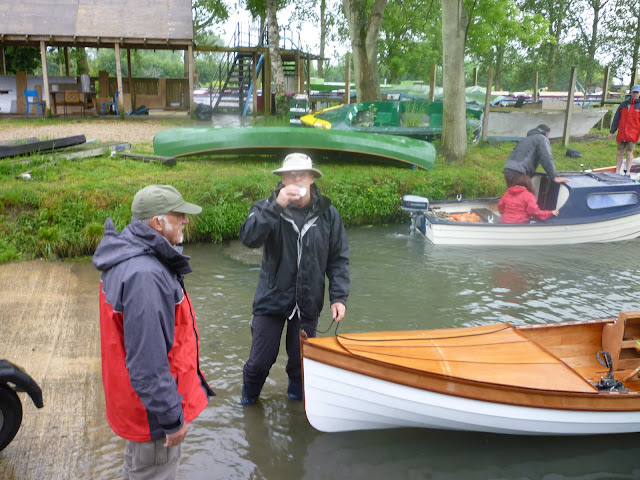 And here he is carrying out the stability tests with a big grin on his face. Zelva is normally (?) powered by a Hobie Mirage Drive and went on to win most innovative boat at Beale Park. 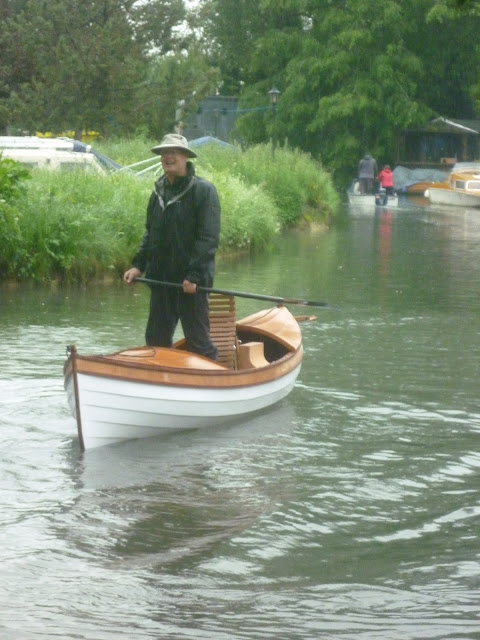 It was a day for First Launches. Spirits only being slightly dampened by the torrential rain.
Here is Cee Dubbs launching Polly Wee.
He coaxed her off the trailer with encouraging words of endearment. 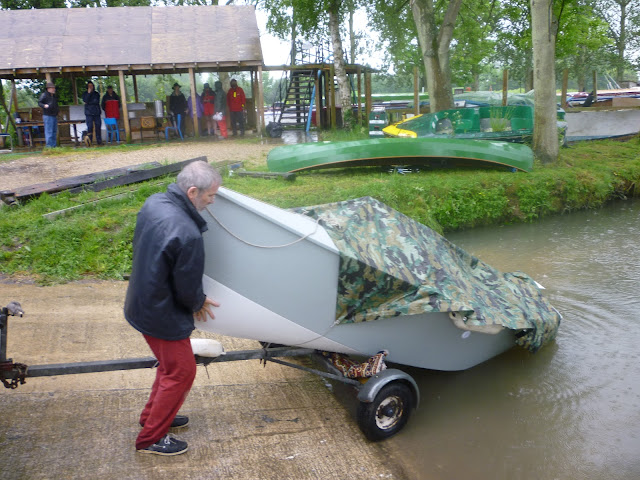 Then had a celebratory tot just to wet her head for the paparazzi. Behind him you can see the enthusiastic crowd of HBBR stalwarts hiding from the rain in the salubrious facilities, which were later to become our alfresco dining area. 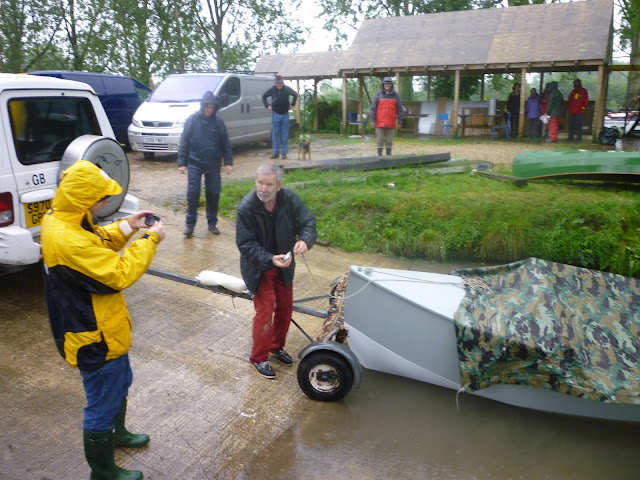 John "Ratcatcher" Lockwood who lives closest was last to arrive. According to John he was making last minute adjustments to TBA who certainly looked a lot different from the last time we saw her. 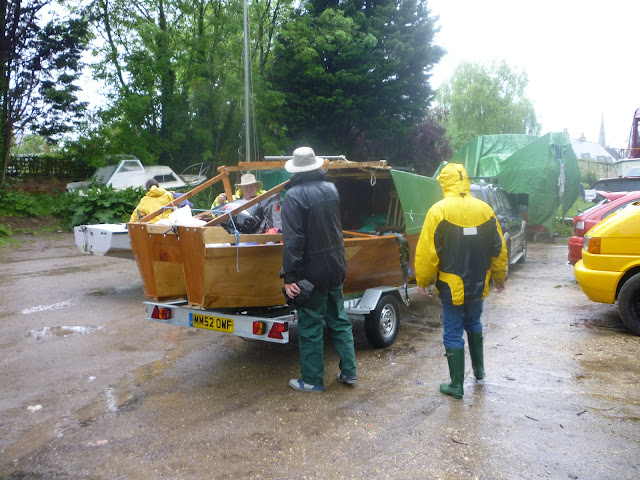 Day One dawned fairly dry and we were off.  This is the first lock below Lechlade.
Once we spread out it became a bit less chaotic. 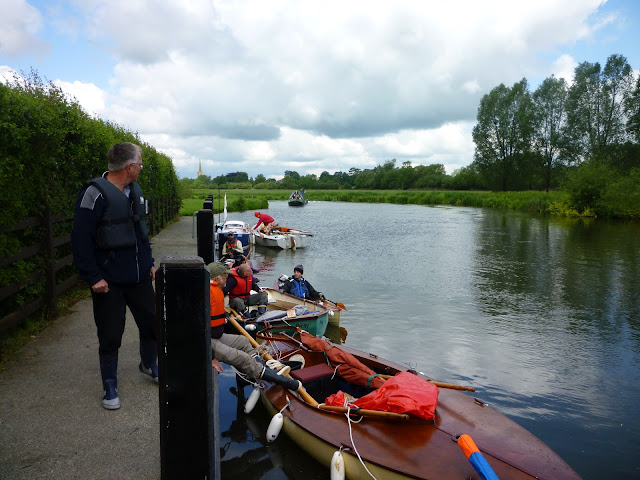 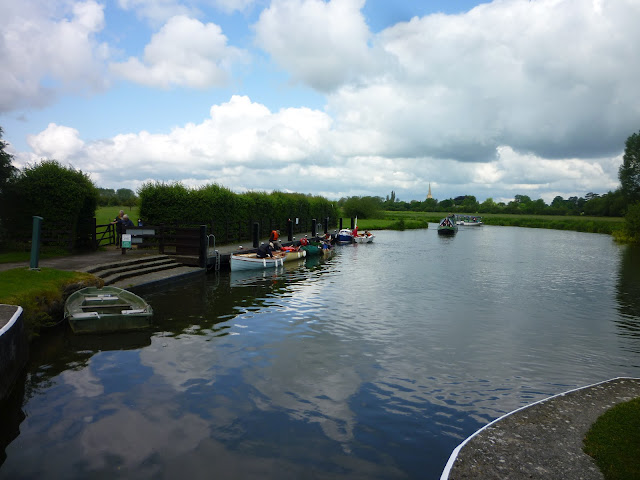 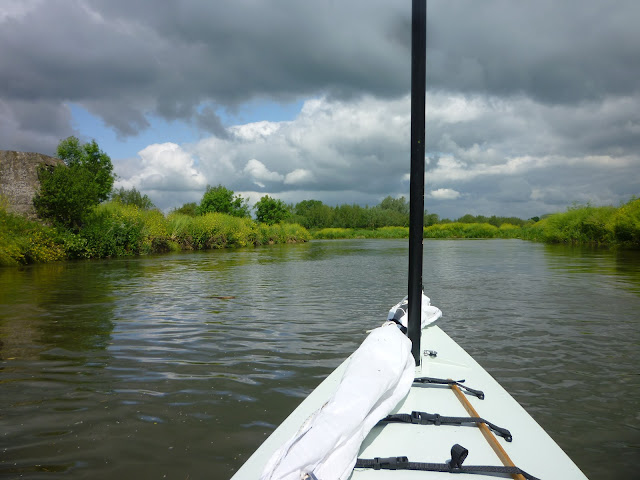 Well until the next lock.
Notice the sign on the gate.

If it had rained much more they could have closed the river. 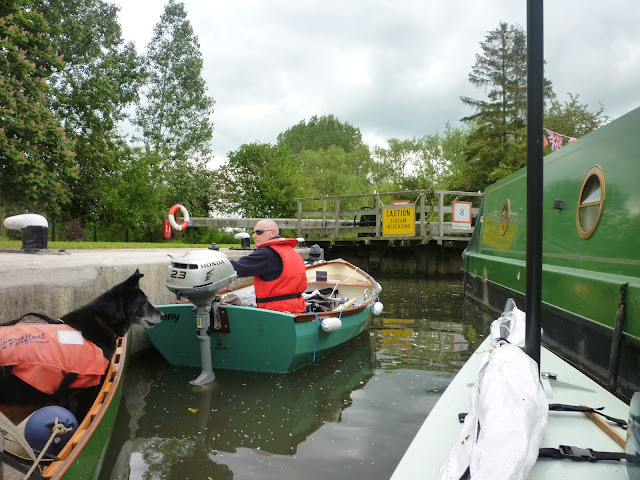 Cee Dubbs cruising below one of the Thames Path foot bridges. 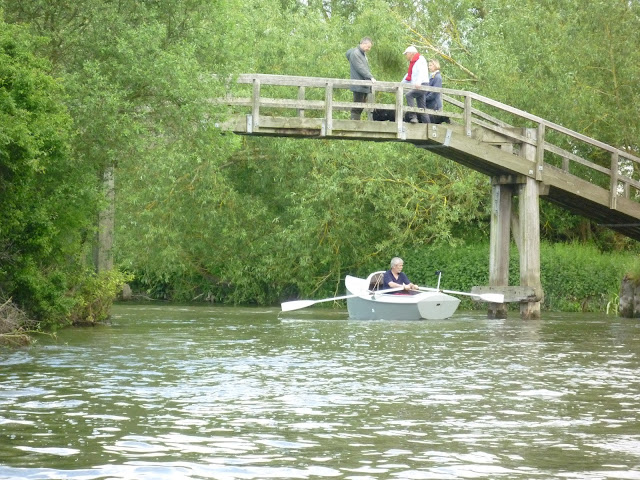 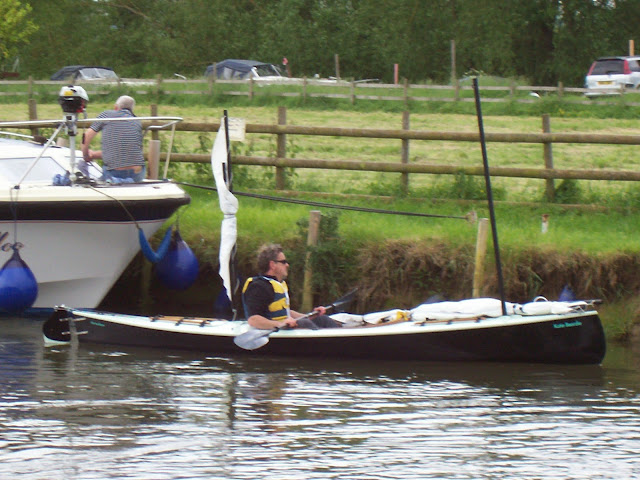 Approaching Newbridge at The Rose Revived Pub on the second day.
Too early for a pint though. 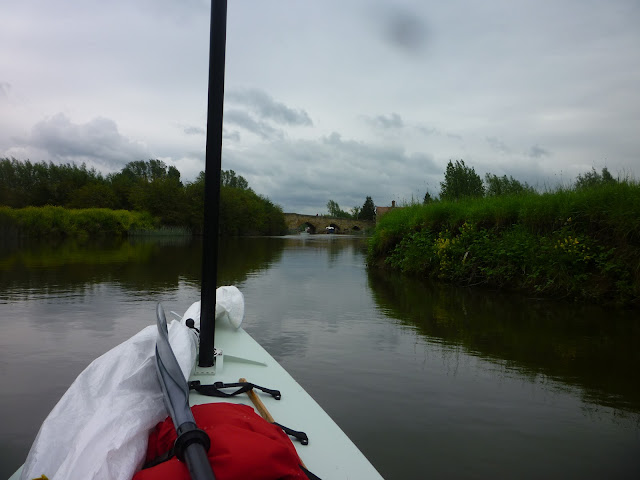 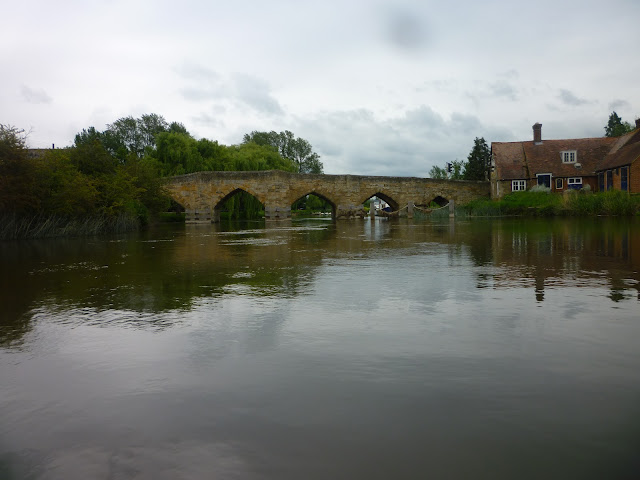 Camping in the rain at Swinford Lock near Eyensham 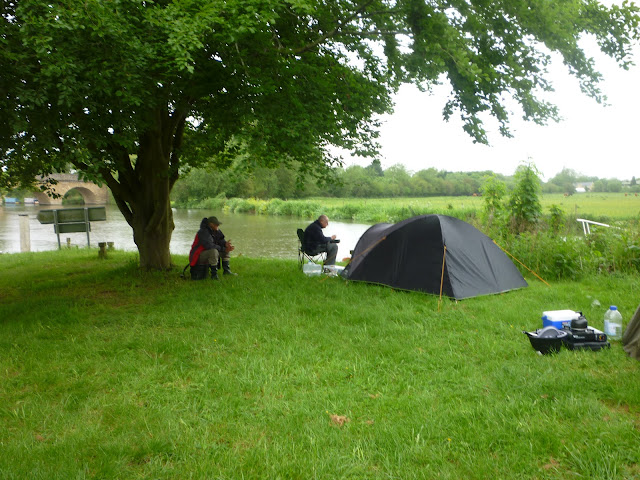 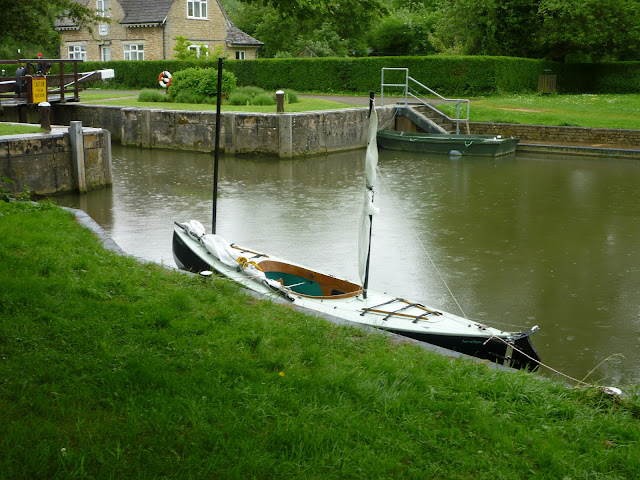 A small encampment of Water Gypsies gathered down stream 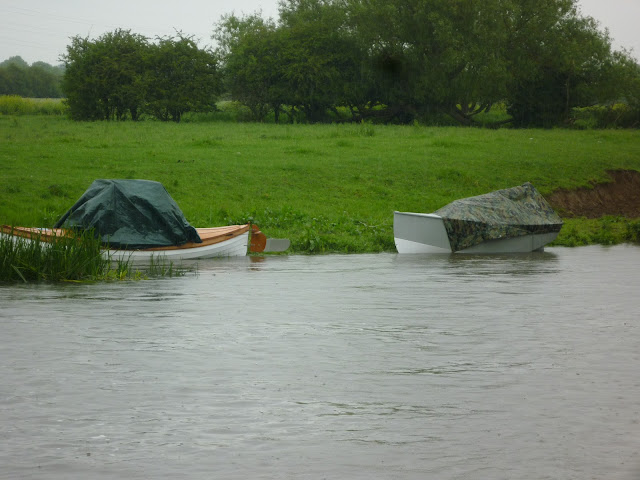 What do you call two paradox's and a Millibee? 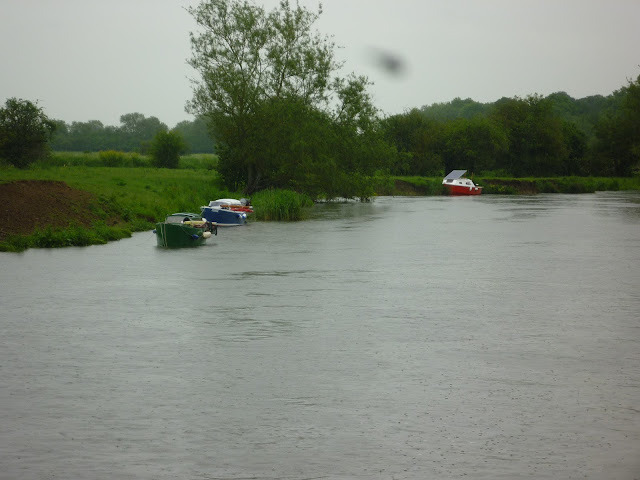 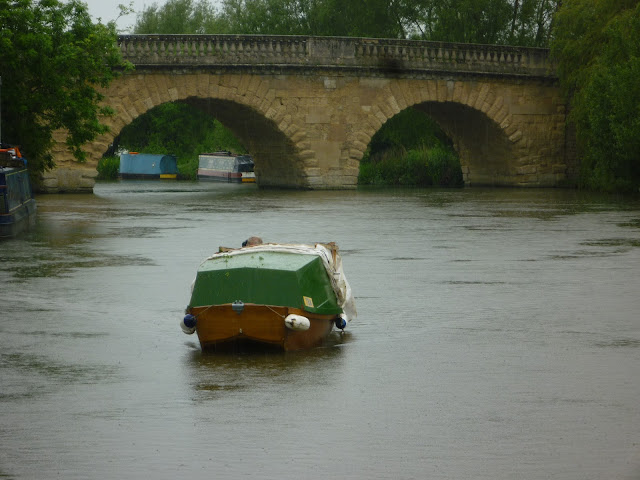 The much modified and extended TBA . Notice the historic Captain's Chair.
He's talking about adding a flybridge next.
I hope he does. 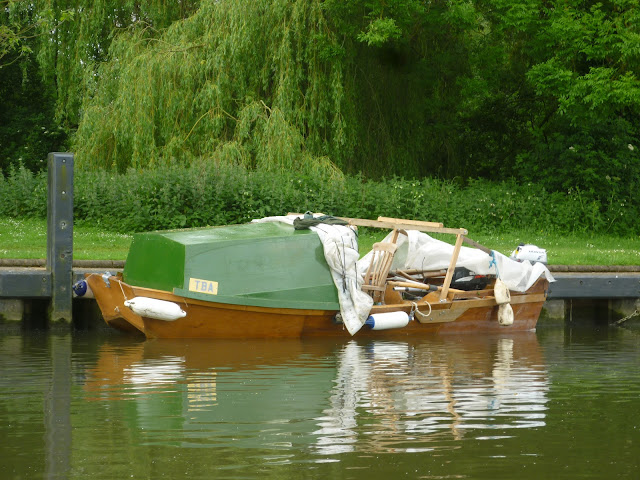 Phil and Gem the wonderdog. 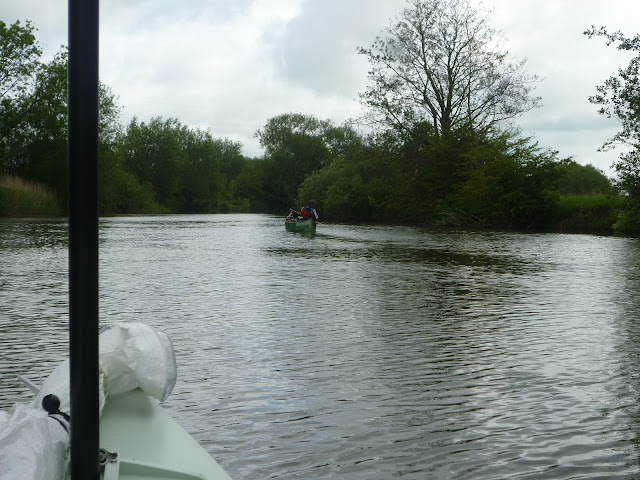 Wild weather, adverse gales, and heavy rain put paid to photography after that.
As did the dose of Thames Tummy I had on Friday.

We rose early Friday morning and battled against the winds to meet our date with the world's press, only to discover the Friday Show had been cancelled due to treacherous conditions underfoot.

But here we are at Beale, on Saturday with the sun actually shining. 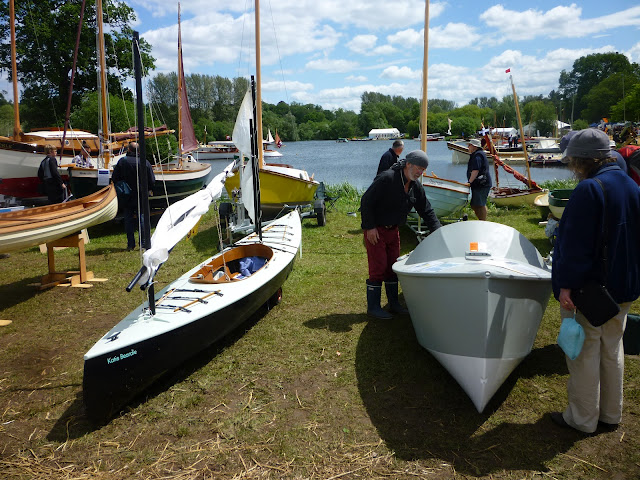 The 18 Boat flotilla of the HBBR made it to a very wet and muddy Beale Park on Friday after facing the worst of the fickle British Weather.

Unfortunately the show was cancelled the day we arrived but it did open on Saturday and Sunday. 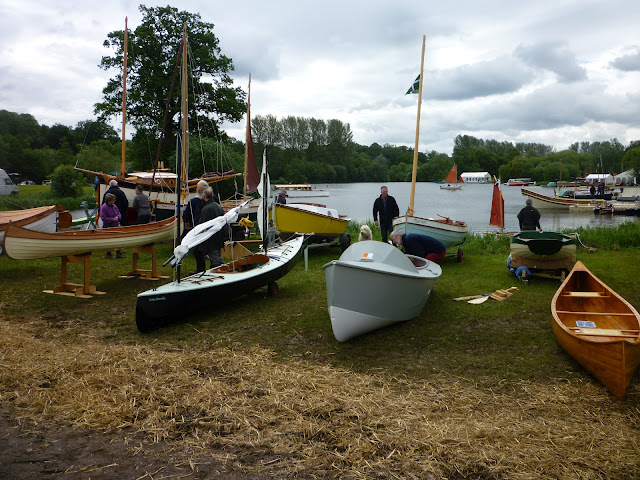 Here is Katie beside her distant cousin Polly Wee .

We entered five boats in the Watercraft Amateur Boat Building Awards and altogether lifted three of the prizes which can't be bad.

A few days of sunshine last weekend meant I could get on with Katie's new suite of sails. 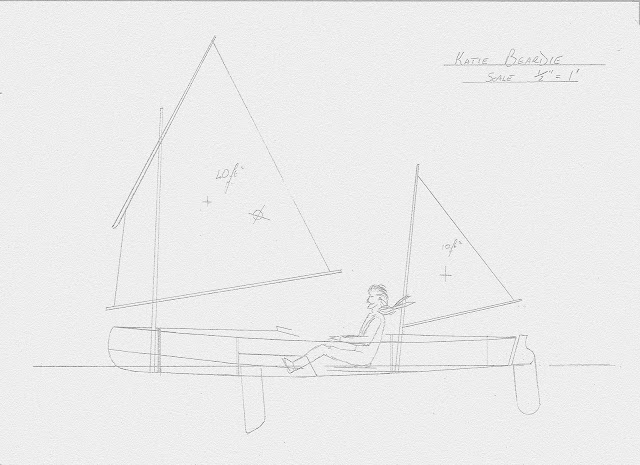 Now the trouble with this Blue Peter type of build, where there is very little in the way of plans, is that you can change your mind right up until the last minute, and also things don't always work out exactly how you hadn't planned them, if you know what I mean.

Since this early sketch the main mast has been moved back to the other side of the bulkhead, so that the buoyancy chamber wasn't compromised.


Somewhere along the line the mizzen mast has lost a bit of rake, the Boom is shorter and the yard possibly a bit higher.


The picture below doesn't really do it justice as it was sitting at a broad reach in order to prevent a capsize on the trolley . 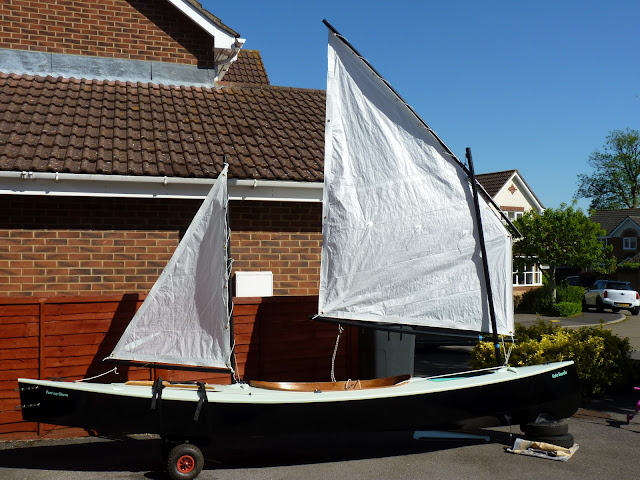 I seem to have spent all week getting ready. The boat is now finished. Well as finished as a boat ever is. The camping gear has been all sorted, food and clothes packed, and the roof bars have been altered to take Katie.


We meet at Lechlade, tomorrow Sunday, and we set off on Monday morning.


Friday should see us at Beale Park for the Boat Show.