Its getting very close to Thames Raid time again.

Organising this year's adventure has been seriously hampered by the demise of the Beale Park Boat Show. Regular readers will know that it has been our custom to leave our vehicles and trailers in the Beal Park Car Park where they waited patiently for our arrival heralded by wandering Jazz Bands and the deafening cheers of the crowd.

We asked Beale Park politely if they would let us use their car park, and maybe even the slipway so that we could enjoy our tenth anniversary cruise in the usual way, but they needed all their space for the hoards who would be descending during the Bank Holiday and School Half Term and politely said no.

We have also previously left a vehicle or two at The Trout, our embarkation point, either because the minibus had let us down or some other minor catastrophe had befallen us.
This year The Trout said sorry but no, as they need all the space they can get for their world famous Tractor and Steam Engine Fair at the end of the week.

It finally dawned on us that as our trip is no longer tied to Beale Park Boat Show there is no need to have it starting on a Bank Holiday weekend preceding a half term holiday. But leave had been booked, arrangements made, words cut in tablets of stone etc.

We have finally settled on a cunning plan which I'll only divulge once it has been successful,
I don't want to tempt fate, but I can tell you that more catastrophes have befallen our members resulting in one cancellation and one very close near miss.

The purchase of Van Rouge has meant a change of strategy for transporting Katie Beardie. Previously she travelled on the roof of the Volvo, but she is a big hefty girl and there is no way she's going on the pop-top.
I figured out that I could modify the Heron's trailer to take her.

The first issue was tyres. I knew they were a bit bald and probably not legal when I bought it and the prospect of a fairly long motorway drive, and the risk of punctures, prosecution or both meant I needed to get some new ones. 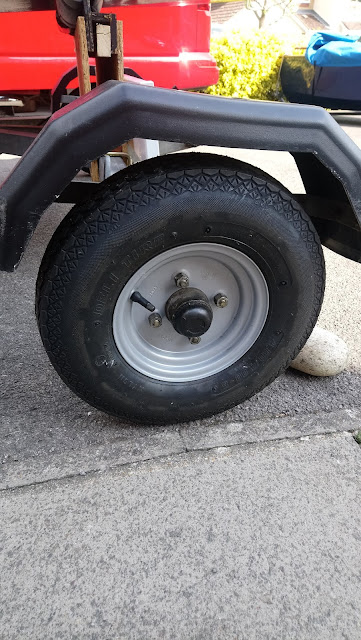 Now it's a fact of life that it is cheaper to buy tyres on the wheel than it is to have them fitted. Go figure, but anyroad I now have two shiny new wheels, and two more old ones to add to my collection.

I then dropped the Heron's launch trolley  off the road base to start the conversion and discovered that one of its wheels had a puncture.
Damn.
I've had problems with these things before and remember one summer at Cobnor when a couple of people had blowouts due to the heat so I decided to bite the bullet and get myself some foam-filled puncture-proof wheels which I managed to track down on e-bay at a reasonable price. 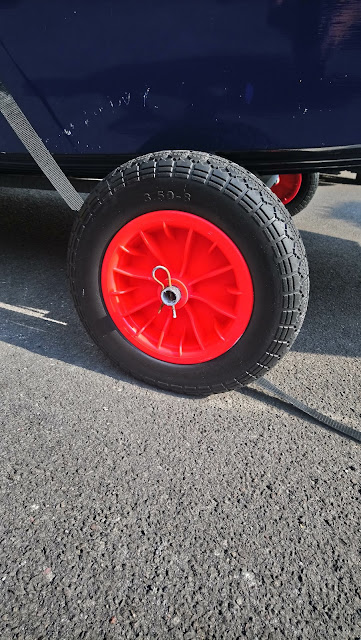 Right, now that was sorted I needed to pull Katie out from her lair down the side of the house and do some measuring.
She seemed a bit reluctant to move, and when I got her out I noticed she was listing to starboard.
Have we guessed yet children?

One of the tyres on her little trolley was totally flat.
I wasn't speechless, in fact I found several good Anglo-Saxon words to express my frustration.
I actually had a go at mending the puncture.I got the tyre off the rim OK and found the hole in the inner tube which was rapidly patched with the bicycle repair kit but getting the tyre back on the rim was another matter altogether, and when I eventually succeeded and pumped it up...………………….I could hear the gentle hiss of the air escaping back where it had come from.

I now know exactly how far a half inflated trolley wheel will bounce when you throw it against a brick wall. Quite far, you need to step out of the way on the rebound.

So, back on e-bay again to find two foam-filled puncture-proof wheels for the canoe trolley. 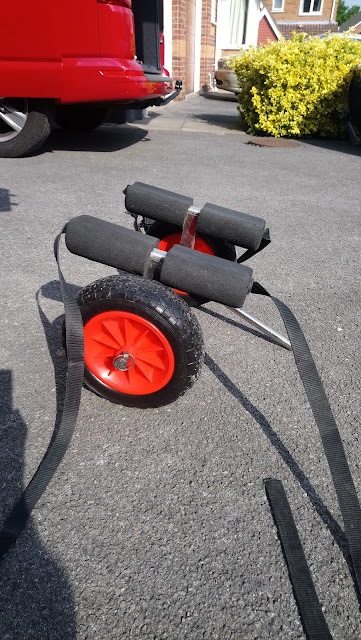 Now, what was it I was wanting to do?

Ratcatcher has been caught.

John "joined" the HBBR when he arrived at Cotswold Water Park with his cathedral hulled powerboat TBA (To Be Advised.) 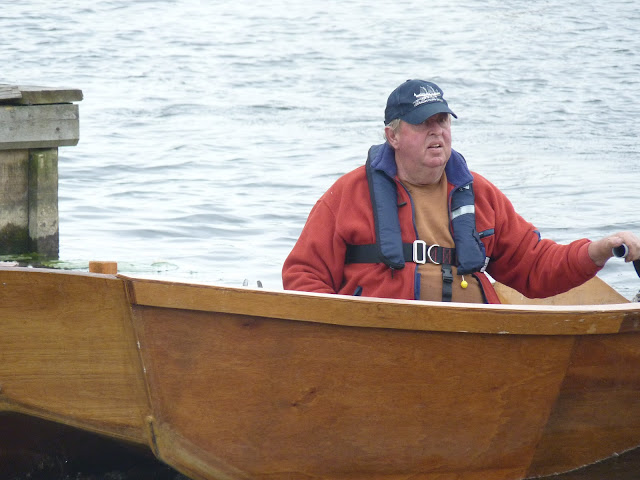 John enjoyed a place on the slightly eccentric margins of our group of mild eccentrics and always liked to do things his own way. He was famous for his collection of sheds at home, and there was a very fine line between his shed building and his boat building. 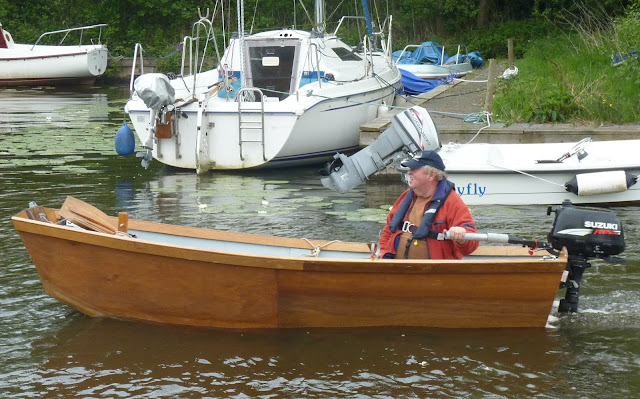 This was never more apparent than on the infamous 2012 Thames Raid,
the start of which coincided with the Queen's Diamond Jubilee Flotilla on the lower reaches of the Thames.
While the great and the good were processing down the lower reaches passed HRH in the pouring rain, the HBBR were gathering at Lechlade in a similar deluge when John arrived with the latest modifications to TBA. 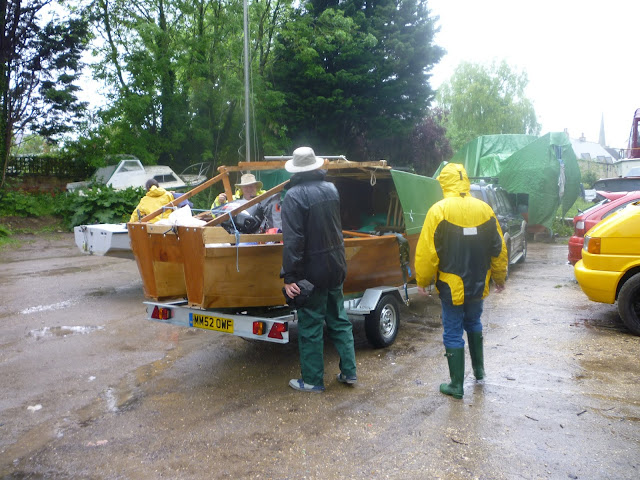 Planning to sleep on board, and being a man of some girth, John had rightly surmised that TBA wouldn't be big enough.  He had bought a flat bottomed skiff on e-bay as a prospective replacement but not satisfied with her lines and build quality  he cut it in half and turned it upside down to use as a cuddy.
Never a man to bring one outboard when he could bring two he then felt that the boat could do with some extra buoyance aft to take the additional weight so he fashioned two sponsons to the transom with an outboard well in the middle.

The whole thing was capped off with a large piece of poly-tarp tied to some 3x2 with bailer twine.  We liked to call that the Flybridge.

A fine finishing detail was the Captains Chair which he allegedly stole from the kitchen and cut six inches off the legs. 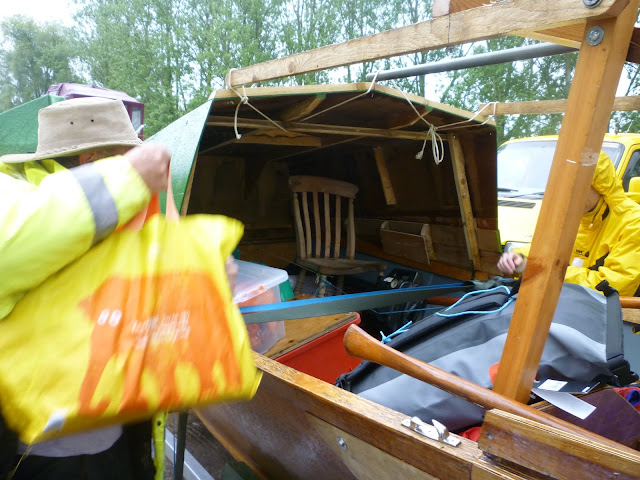 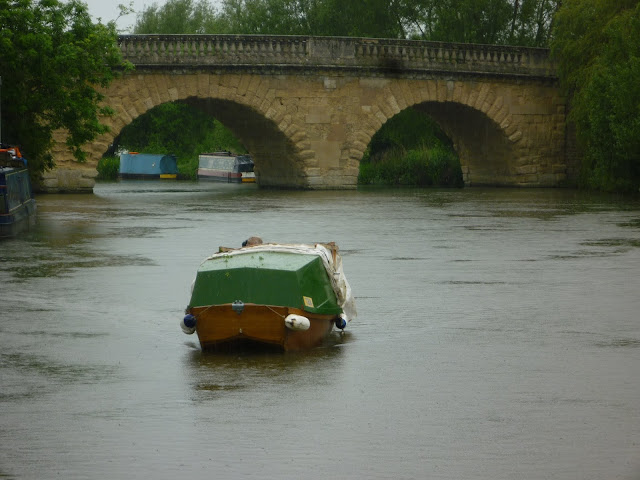 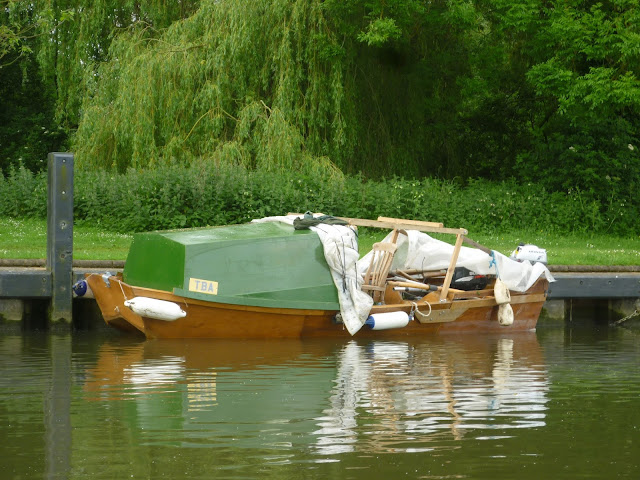 John was well known as a raconteur, his stories could be endless, but always interesting amusing and best served with a glass of something.  It was only through listening to him that you realised what an interesting life he had had and what an intelligent man he was.

He was an experienced Sea Kayaker and variously had been a Lorry Driver, Health and Safety Inspector, Department of Agriculture soil sampler ( but never to my knowledge a Ratcatcher) and only once did he slip into the conversation that he had an unfinished thesis somewhere, abandoned some time in the distant past when life, marriage and the important things took precedence.

One of John's favourite saying to me, a Scotsman, was that a Yorkshire man, like him, was just like a Scotsman with the natural generosity removed.

In reality John was the most generous of men, always ready to lend a hand, he kept an eye out for everyone and if he saw someone in difficulty he would quietly and politely enquire whether you would like some assistance, and if not would stand off at a distance in case you changed your mind.

He will be sadly missed by his family and everyone who knew him.