Introducing the Fluorescent Brothers.
Paul and Pete showing a distinct lack of dress sense congratulate each other on their sartorial selection. Shortly after this Paul on the left caught a rut and did a full forward rotation digging his handlebars into his ribs in the process. Like ouch dude! 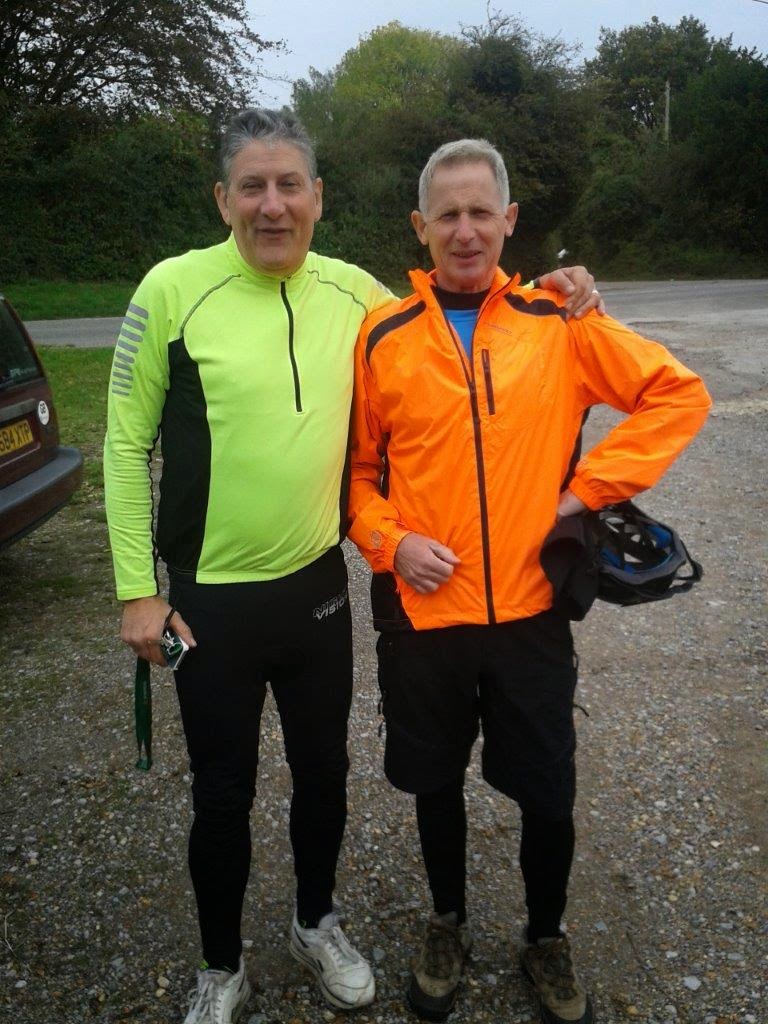 He also managed to buckle his front wheel which we fixed in the time honoured manner by jumping on it until it was nearly flat again. Sadly we were so intent on getting him back on the track we forgot to take any photos. 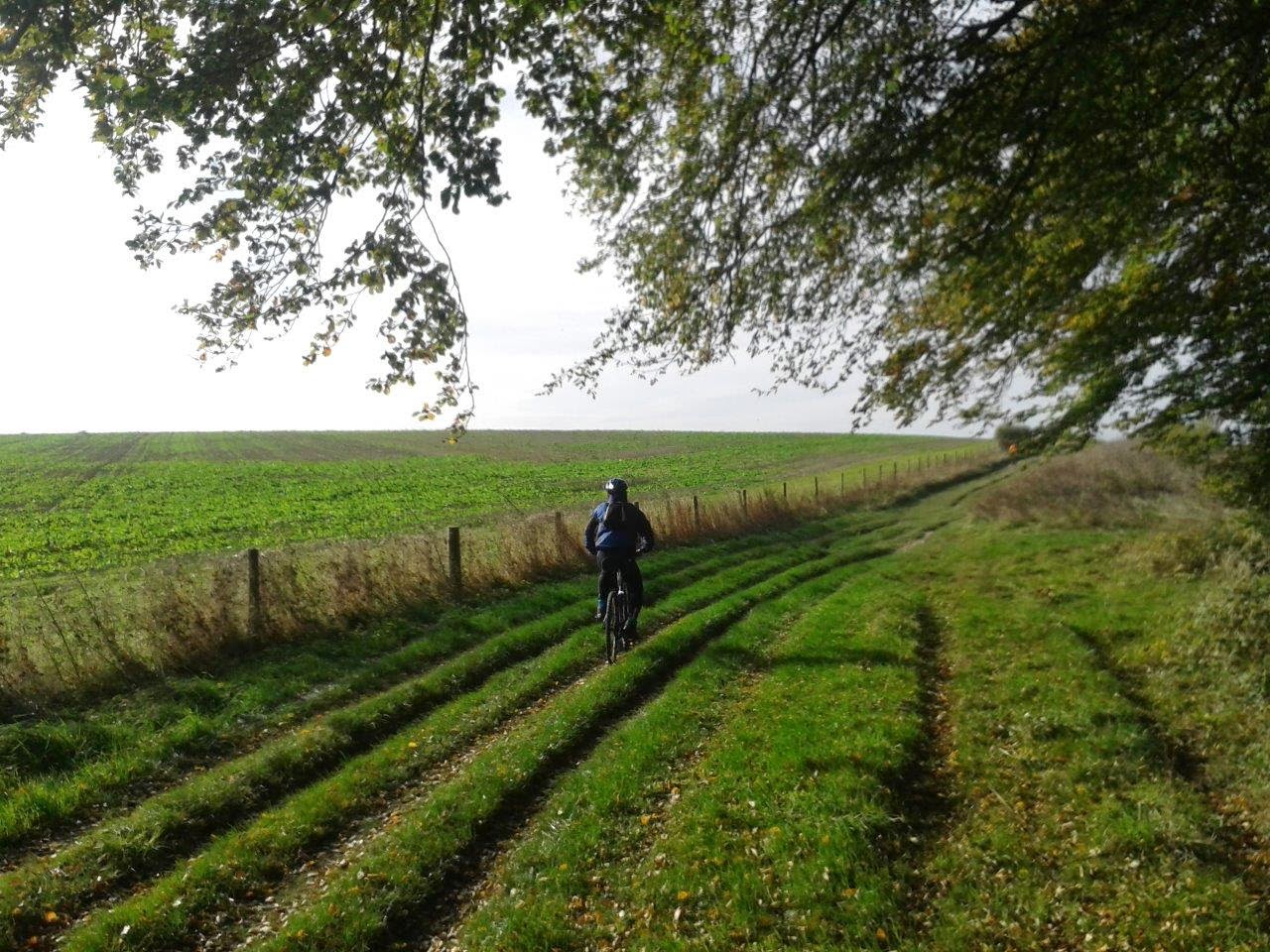 The Old Green Track, lone rider in the groove. 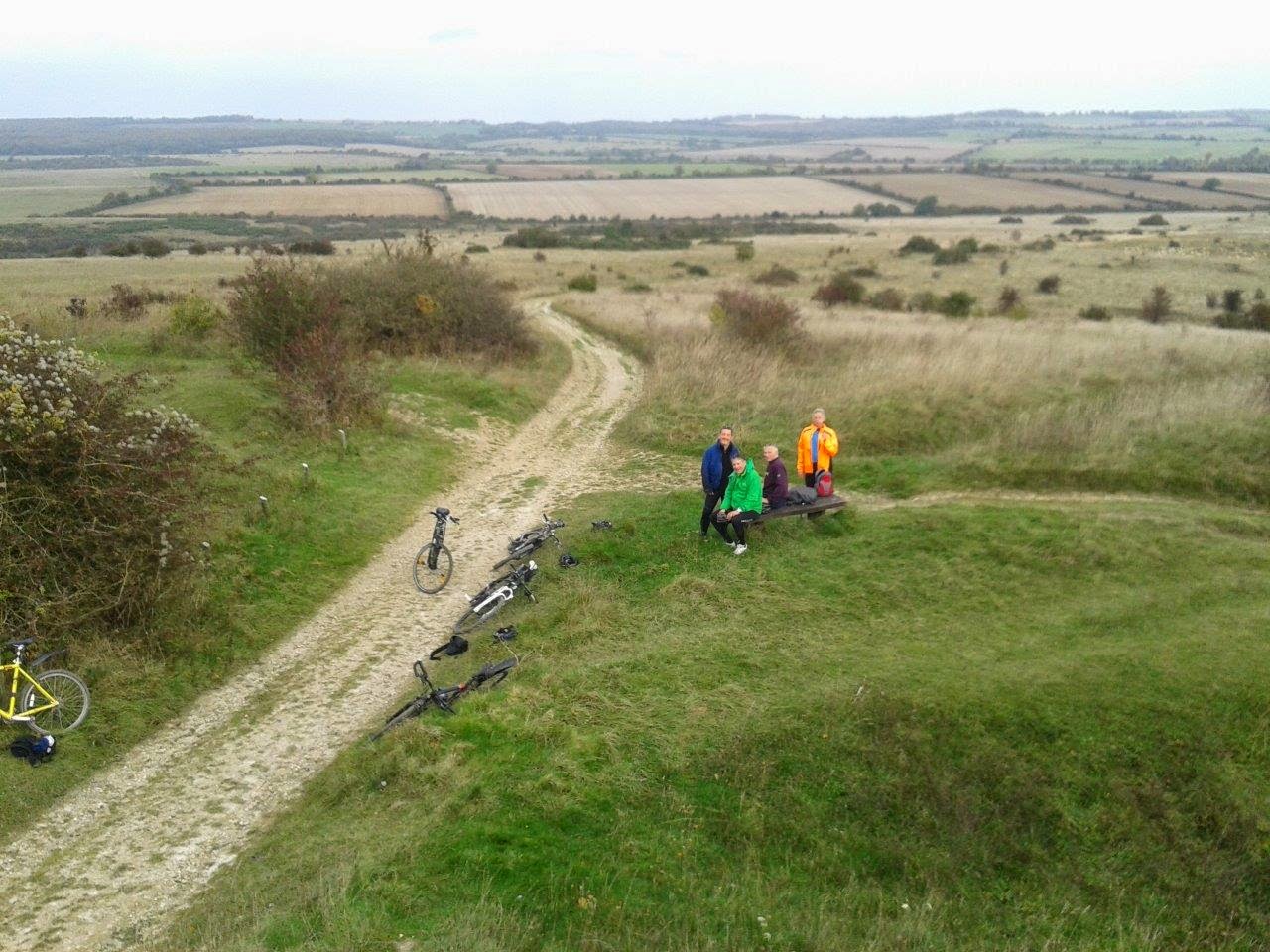 This is where the track crosses Grim's Ditch on Blagdon Hill.
The photo was taken from the top of the giant earthworks probably built in the iron age. 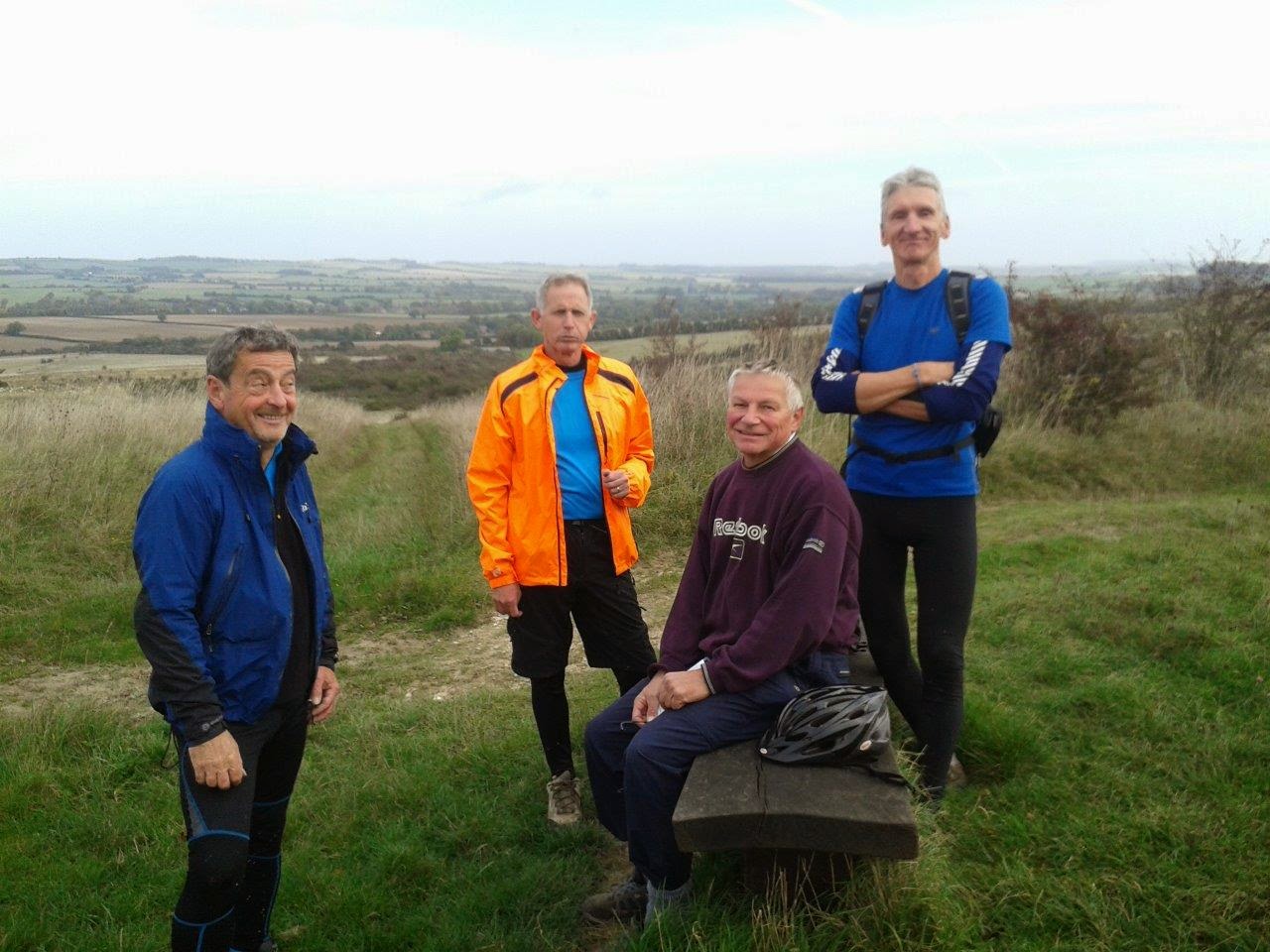 Group Photo: Gormless at Grim's Ditch.
I look as if I've just won a grinning competition.
Pete looks as though he's just popped an entire banana in his mouth and is trying not to chew.
Paul T (seated) looks like he's posing for an engagement photograph and John looks chuffed because Paul said yes. 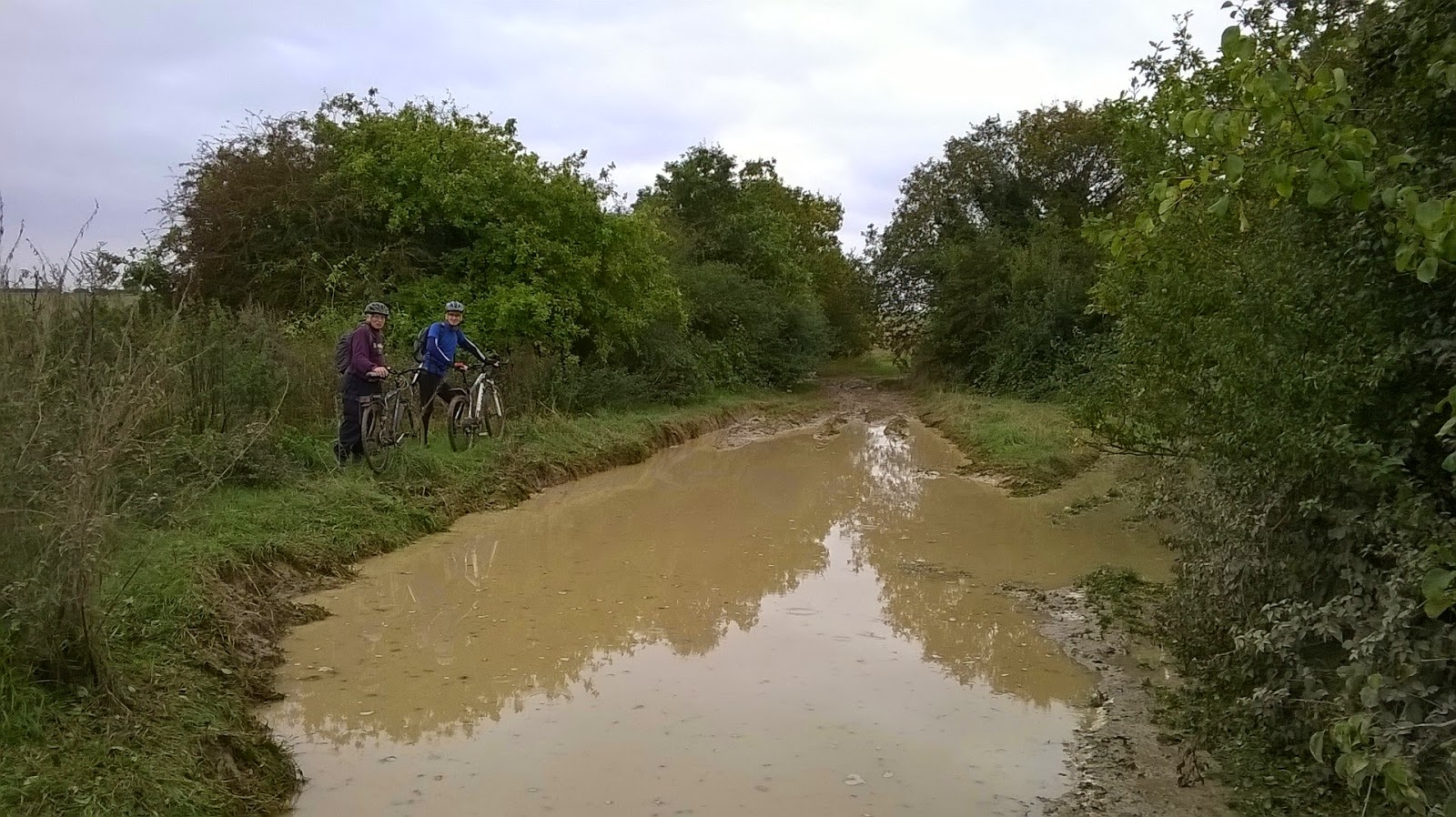 We nearly had a go at this one but there was rumoured to be an old Massey Ferguson tractor at the bottom. 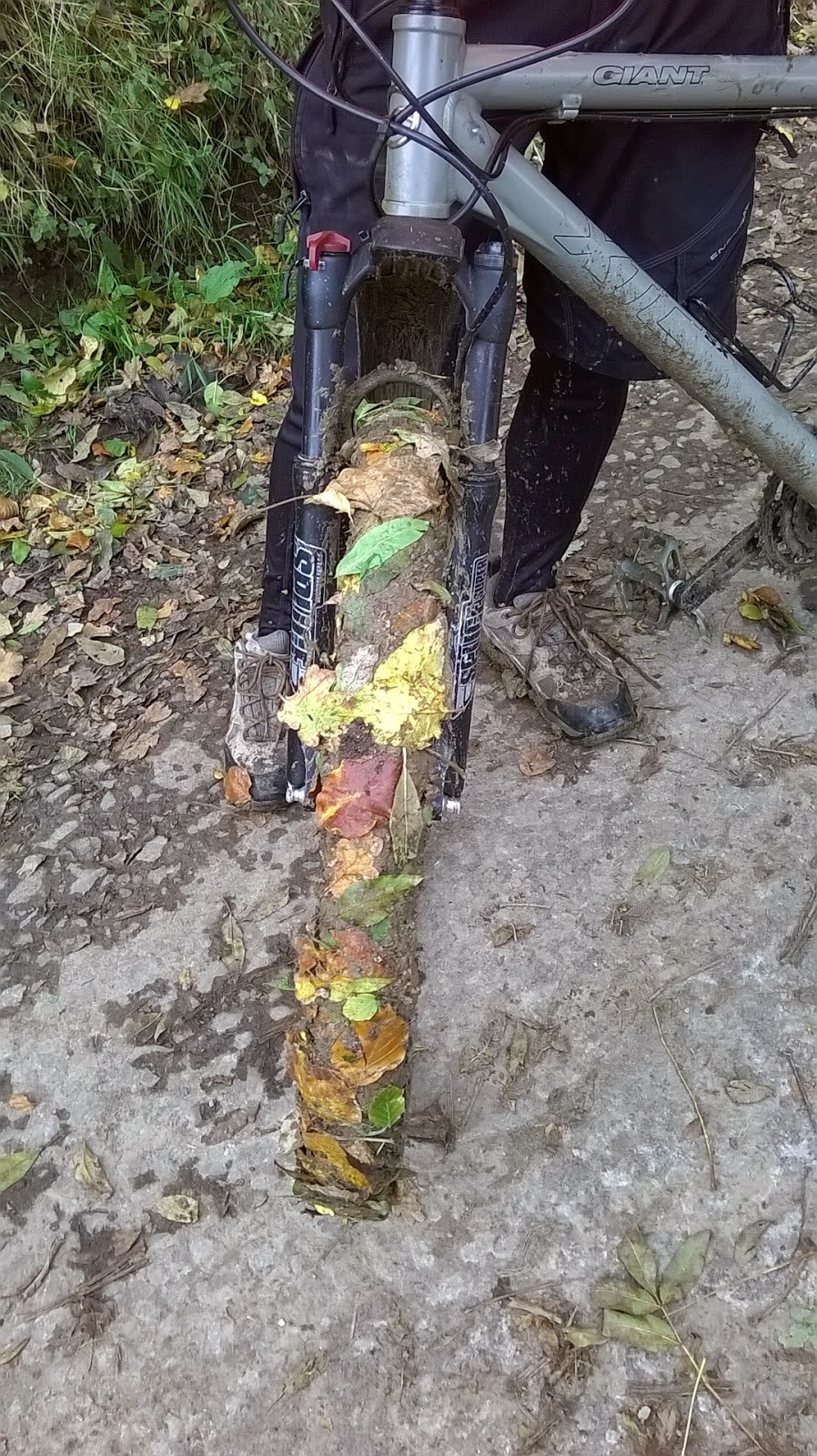 A little autumnal colour on the tyres, or if you are reading this in the USA.
A little fall color on the tires.

Wherever you are reading this, they are stuck on with pig shit. 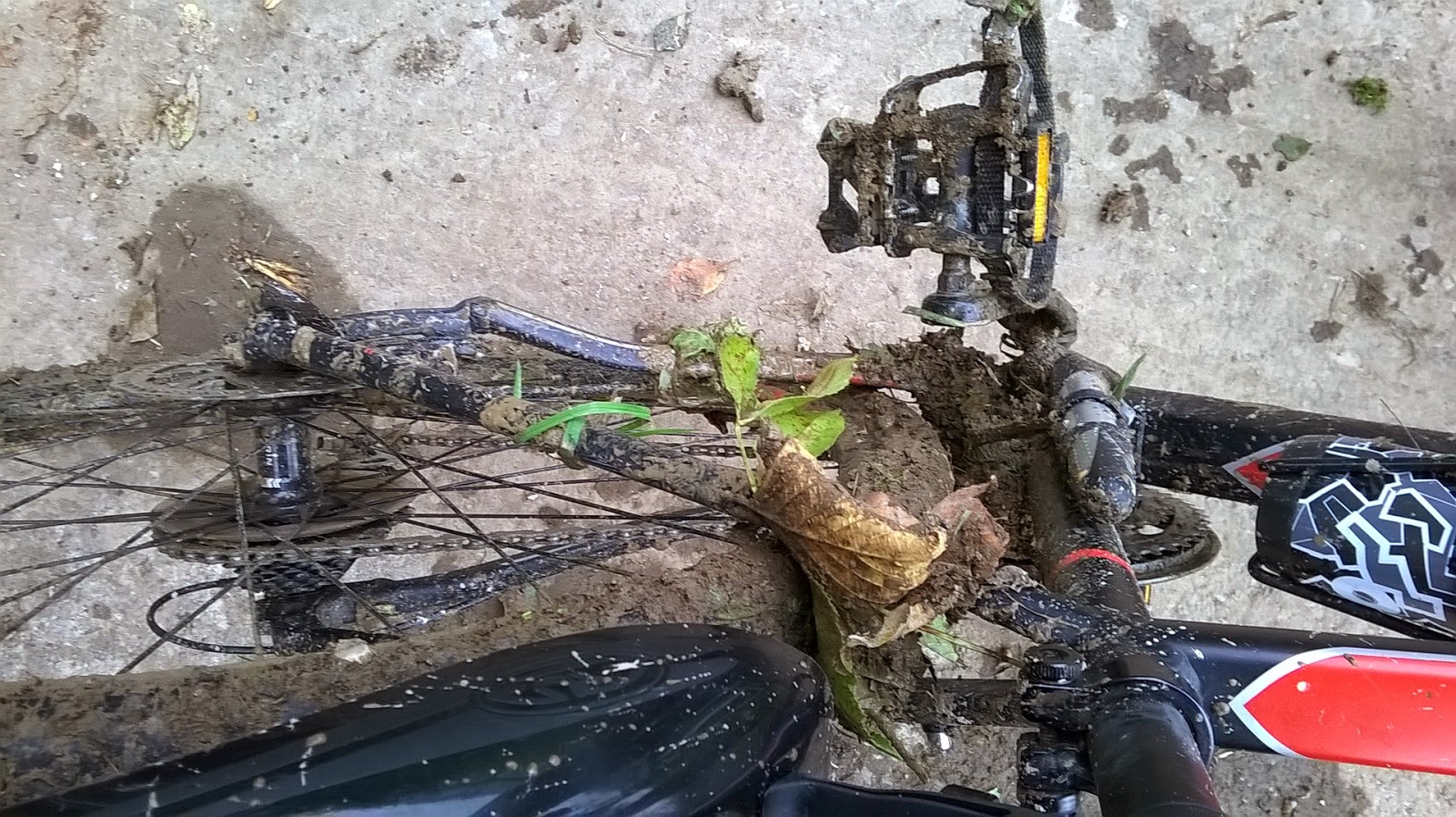 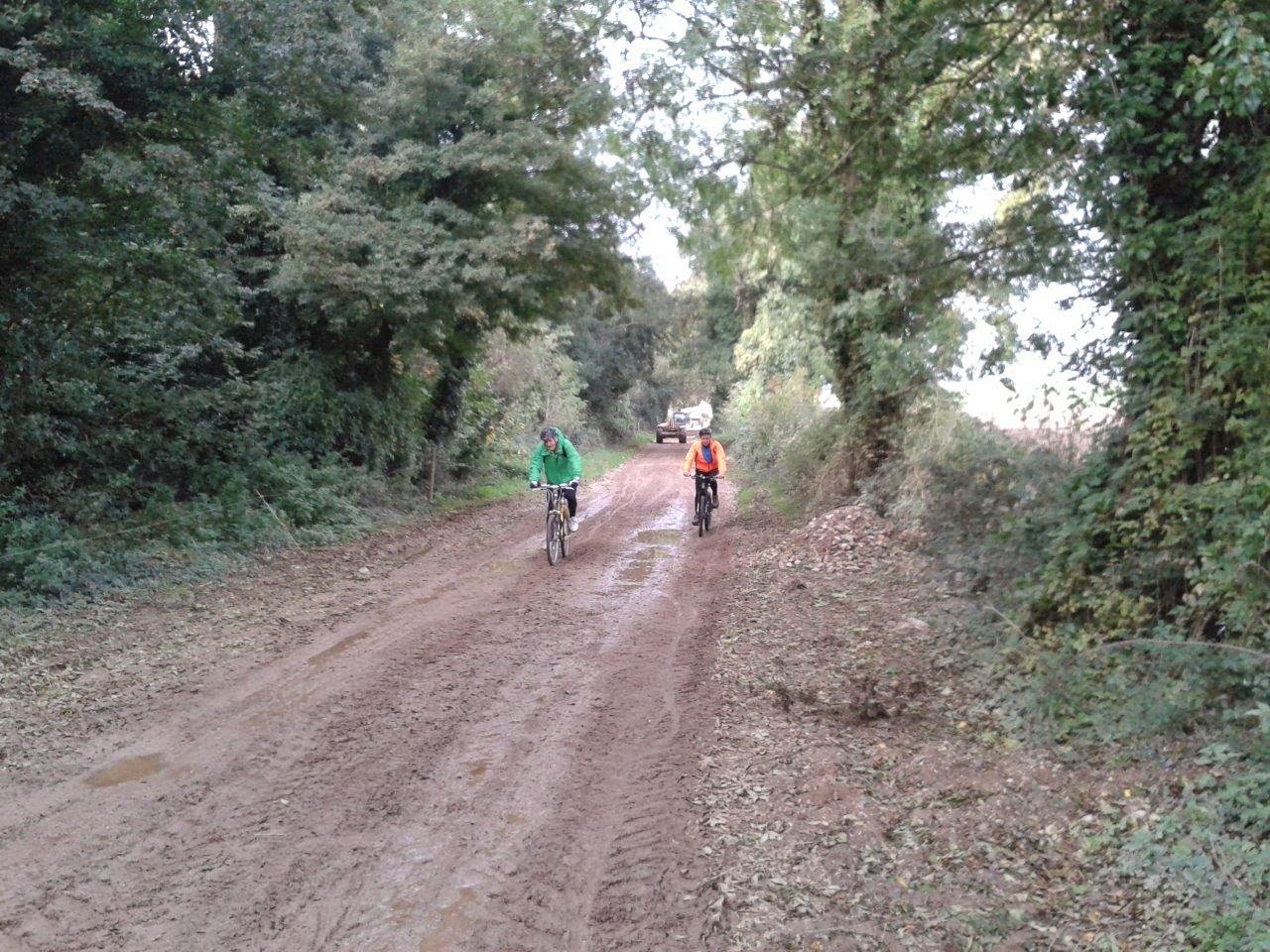 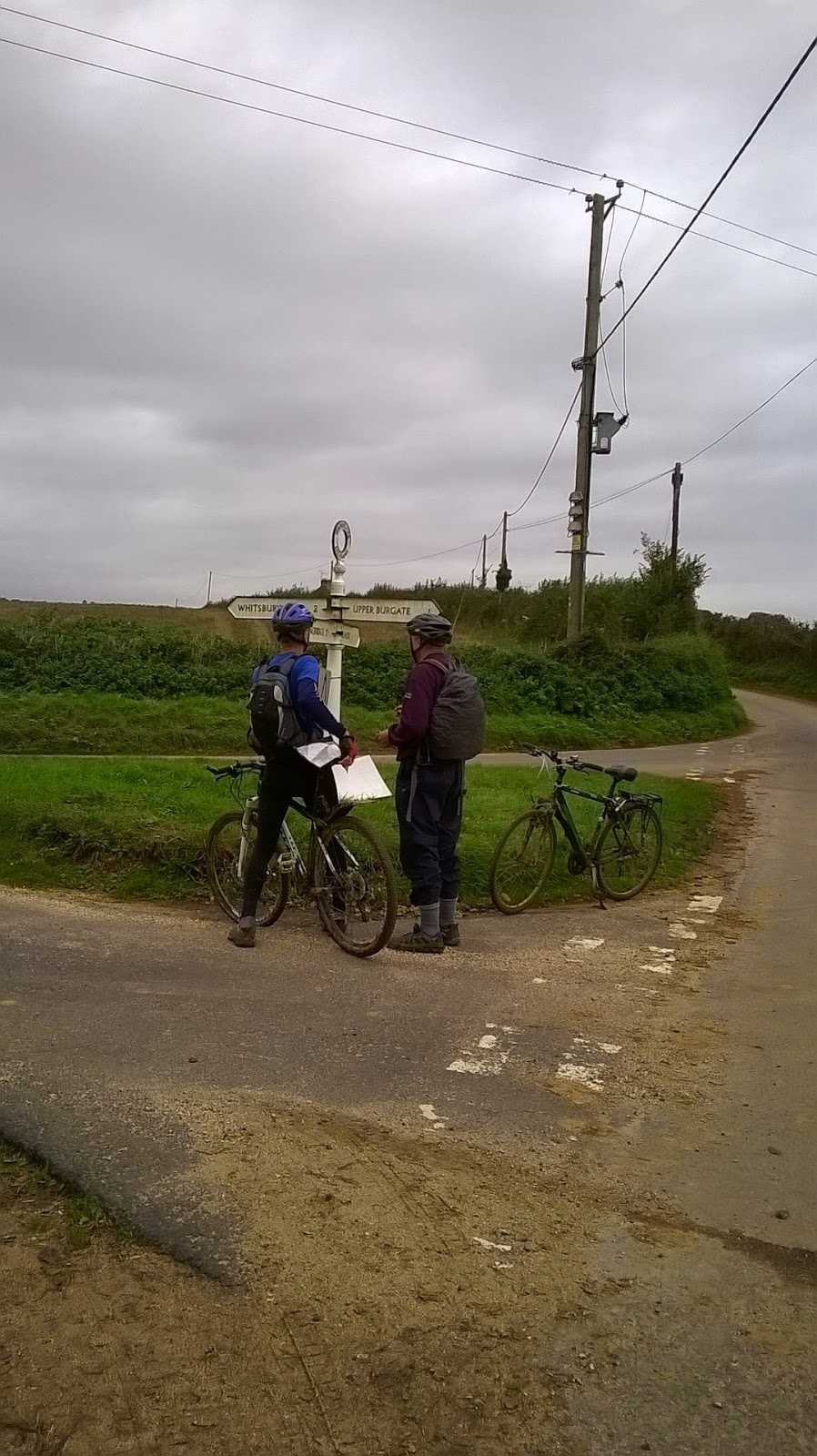 The inevitable "Where the F*ck are we John" photo. 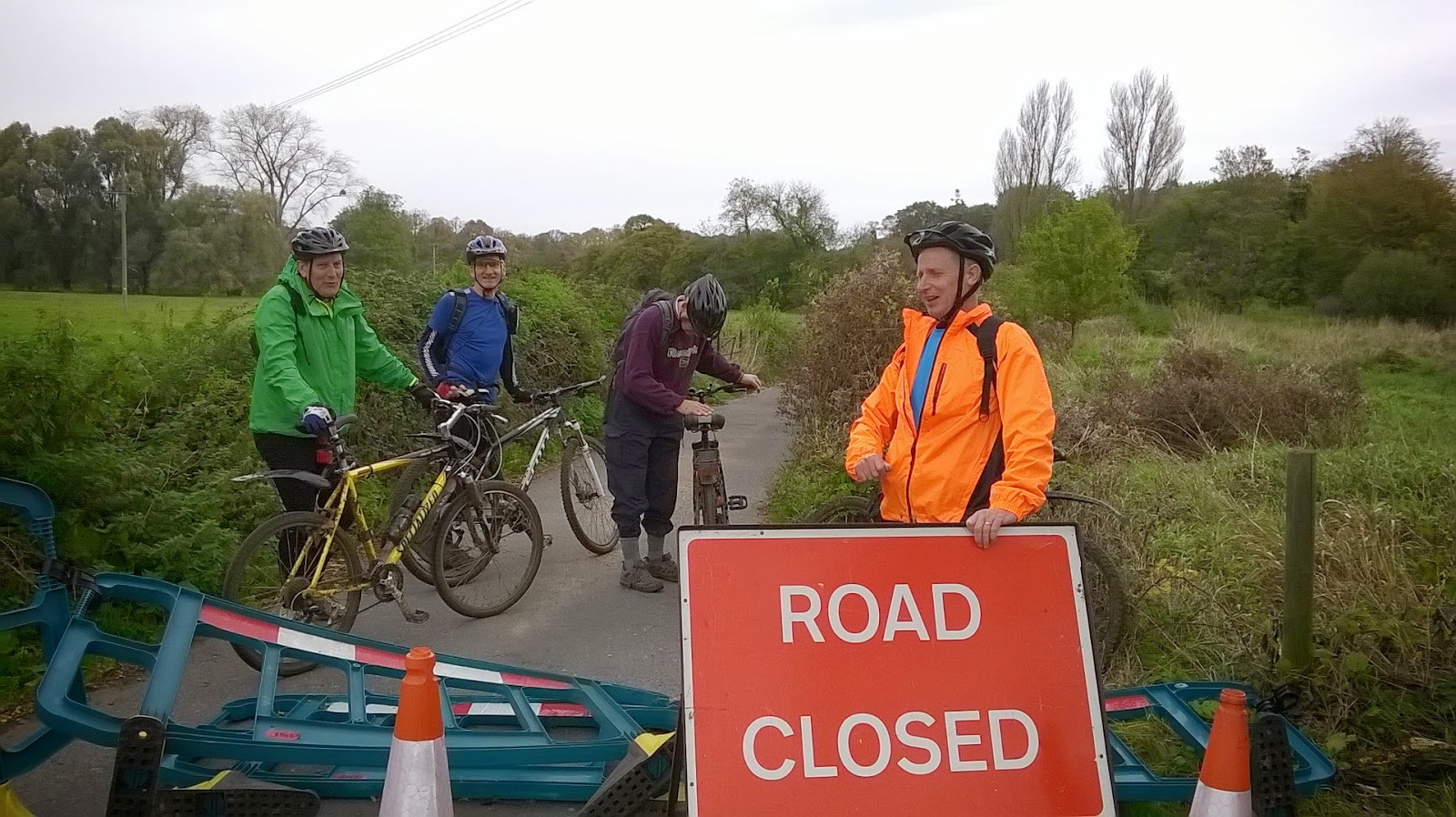 The inevitable Road Closed sign being ignored again.
A bit farther on, over the weakened bridge we met "White Van Man" coming the other way who took a bit of persuading that the road really was closed. 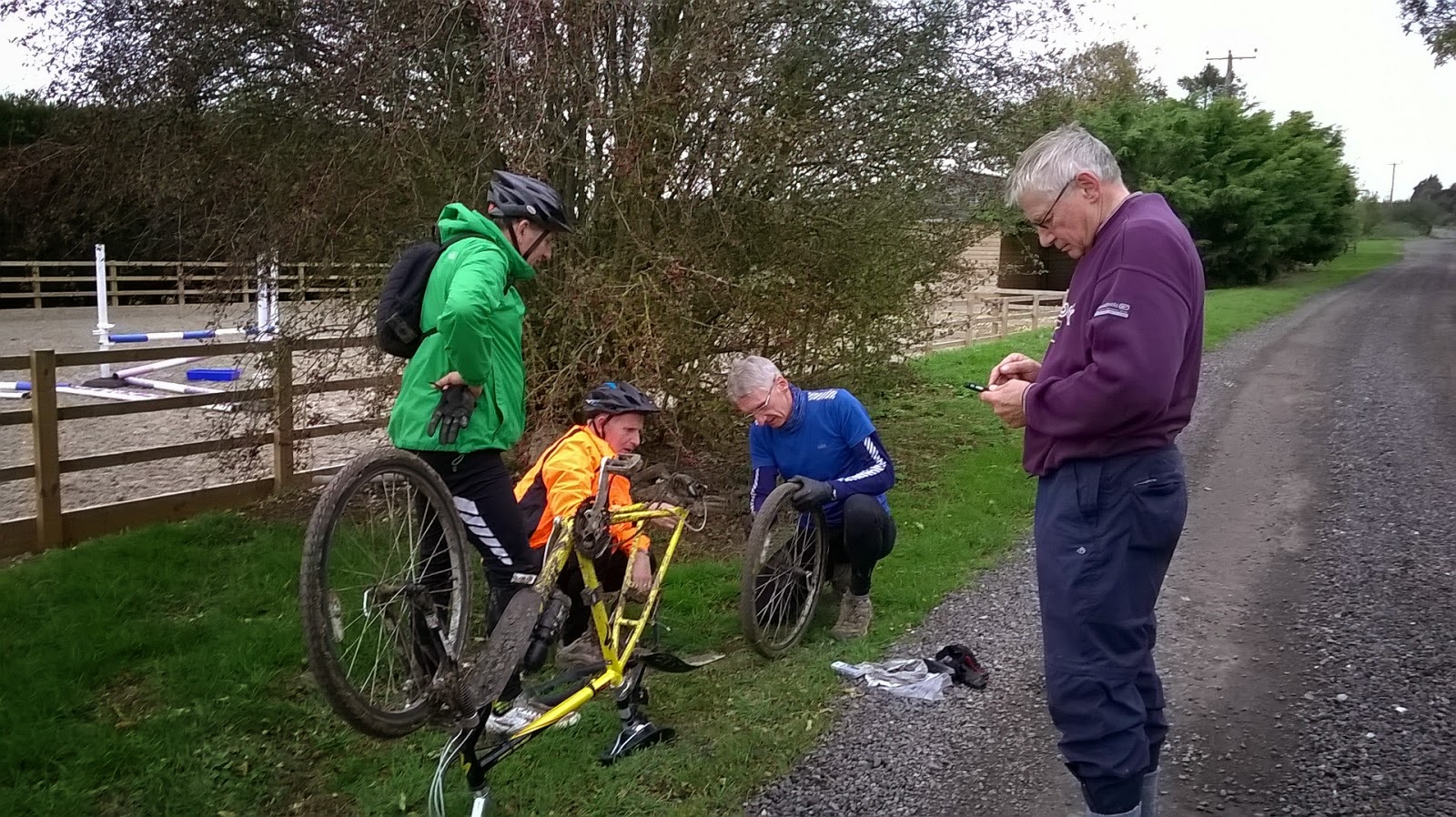 The summer has managed to stretch itself right out until the very end of September. There were a few death rattles last week and a forecast of high winds and heavy rain for the weekend threatened the  DCA rally planned for Dell Quay on Sat.  CW was trying to tempt me out for a "rollock around the harbour" but I was sitting on my fence of prevarication playing hard to get. Then the stars moved slowly round in their firmament and gradually started to line up. The majority of rallyists opted for Sunday, the weather forecast started to look a bit brighter, CW gave me another nudge and the Tooth Fairy said go for it while you get the chance It'll be a long winter. 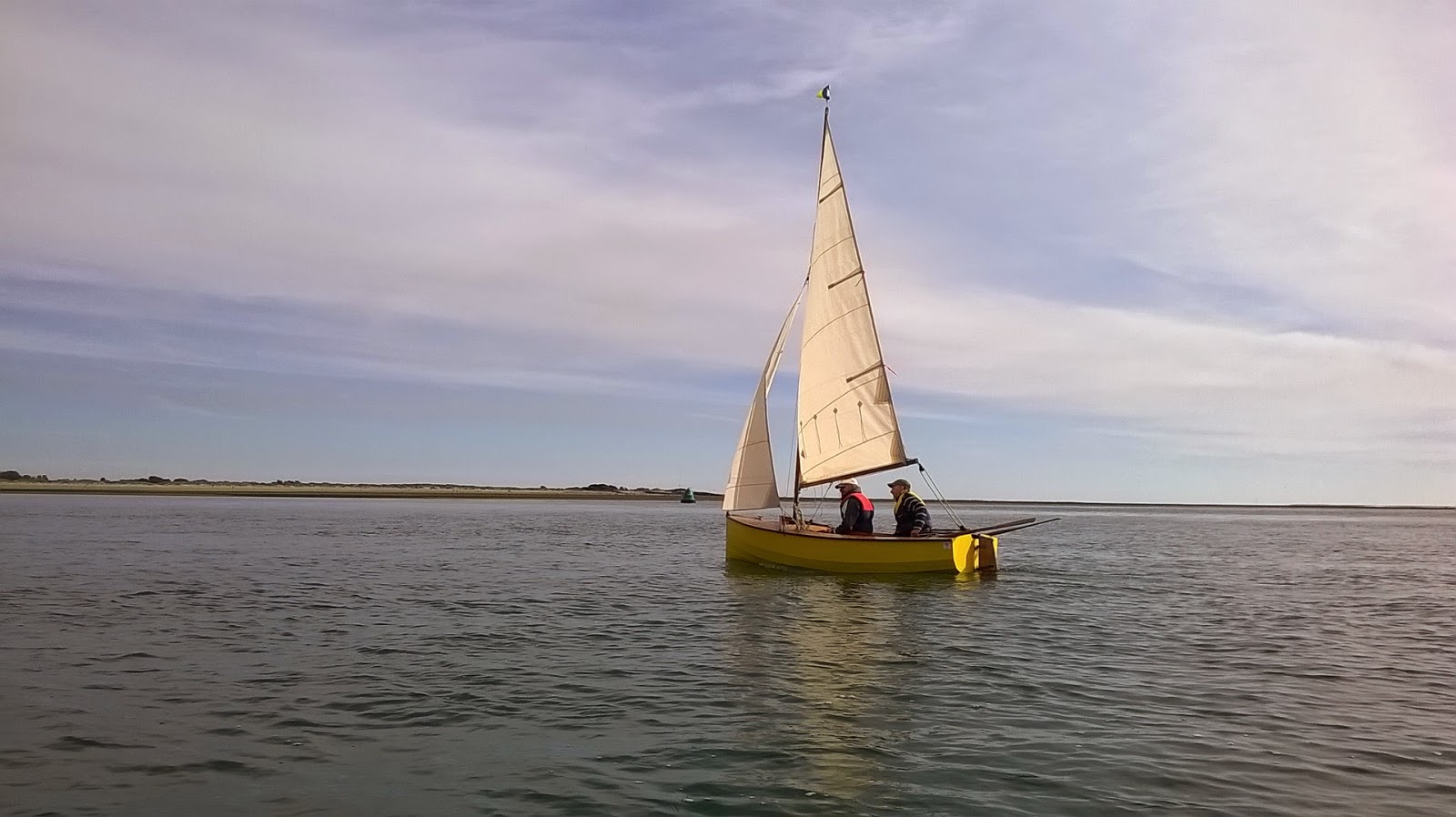 Sunday dawned chilly and still. Still as still can be. The proverbial mill pond could not have been stiller if it had been set in aspic. On the drive down to Itchenor I watched the Great Plume  which didn't exactly bode well for the breeze, and as I pulled the boat down to the hard a local worthy asked if I had an engine or at least a pair of oars as there were  a lot of disappointed sailors out there. 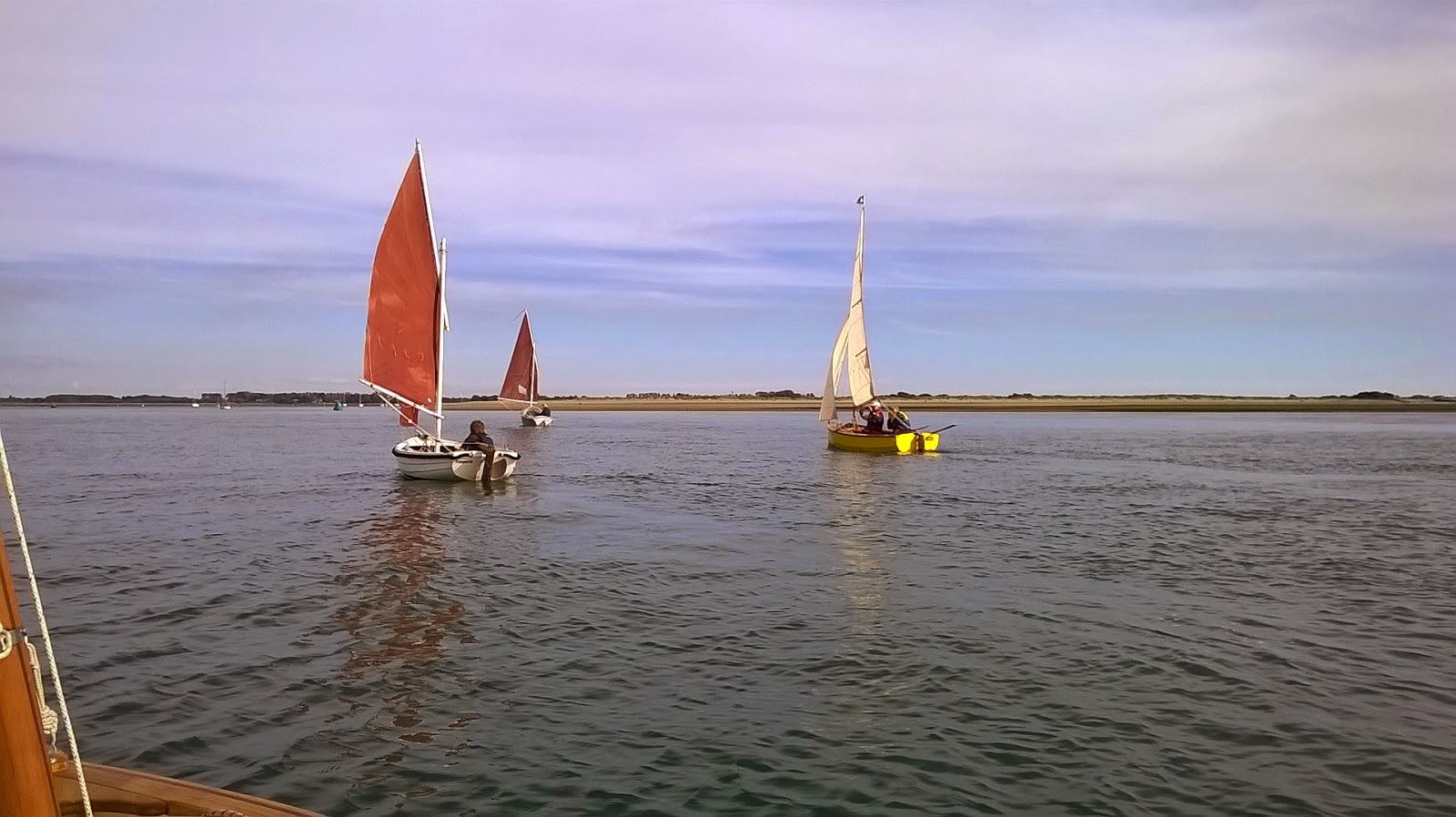 I gave the boat a good shove off, to get me away round the pontoon and into the channel.  The tide was just beginning to ebb so I drifted gently in the current, but as I was making no way, I had no steerage and was in danger of bouncing gently off each boat in turn as I waltzed down through the mooring. To the oars then, well just the one as I was using the other hand on the tiller as I gently dabbed away. No sign of CW yet so I called him up on the ship to shore. Aren't mobile phones useful? He even had his turned on and was just launching at Cobnor so we rendezvoused at the end of the creek.
I saw Alan Moulton rowing in the opposite direction towards Itchenor, presumably looking for any other DCA folk drifting about. CW and I decided to make for Pilsey Island for morning coffee. This required deft skills in the precise and delicate art of light air sailing.
After an extended repast at anchor, where Alan joined us, we saw Sarah gently beating up the channel in what can only be described as a full breeze and decided to join her.
We sailed out past East Head and over the harbour entrance to Sandy Point.
Lovely relaxed sailing for the end of Summer.
On Monday the heavens opened, and Autumn arrived. 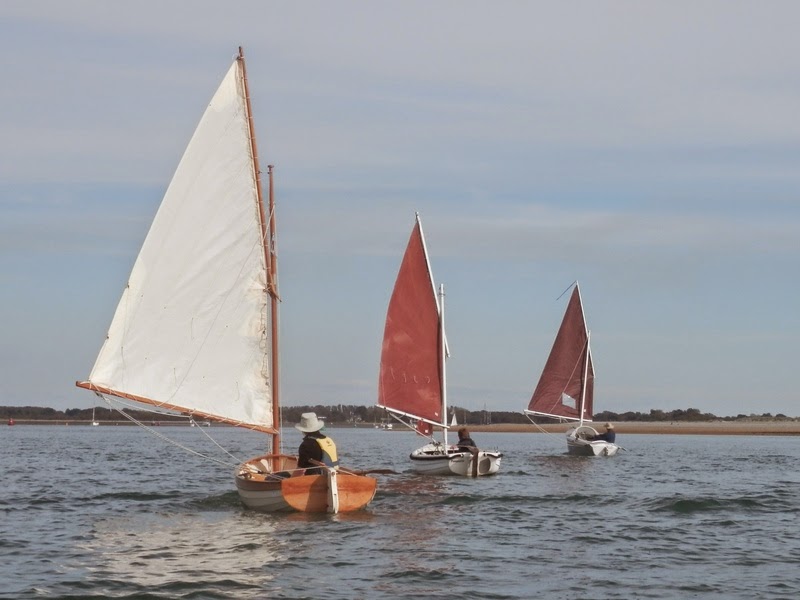