Talking the Plank. Take heed you who would venture here. 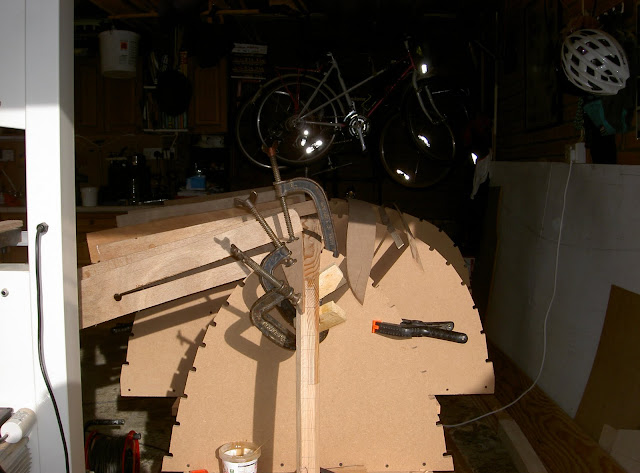 Right we're going back to some basics here, a couple of people are also building Coots and are experiencing some difficulty with the first few planks.  This isn't really surprising as there is a fair amount of twist in them.

The following is, as far as I can remember, how I did it, although I've passed a lot of alcohol since then.  And believe me guys showing these photos is like taking your clothes off in public, a bit embarrasing and not a pretty sight!
Firstly ensure that the positions of the lands- plank overlaps are marked on the forward and side faces of the inner stem. You can get these positions from the paper template Alec Jordan provides.

Bevel the keelson to take the edge of the first plank, this level is just an extension of the flat on the mould.

Next, start to bevel the inner stem, its important not to take too much off here, and the angle has to be just right to provide a good glueing face.
Firstly mark the finished width of the front of the inner stem.  This combined width of the two plank edges and the tapered stem should be the same as the original stem so that the outer stem will fit exactly onto it. See below.

I then use a thin bendy batten along he plank notches on the front three or four moulds and bend it in towards the stem. This will show you the correct angle of the bevel on the stem.  Use a fine saw and cut into the stem parallel to the batten until you hit the mark for the width of the stem, sorry no pictures, hands were full. The batten would follow the upper or lower edge of each plank.
Plane the bevel on the stem down to the cut, you have to imagine what it looks like round the curve of the forefoot, take your time and go gently.
I don't think I took enough off the forefoot bevel, I was too scared of taking too much off. It may have caused me problems later.
When it comes to bending the plank round onto the stem;
Get the plank into position, some of the pin-holes Alec provides for lining up the scarfs are actually on the stations, it'll be obvious which ones, use these with a panel pin in place to position the planks laterally.
The plank should rest on the notches in the moulds. I held the plank in place with the big plywood clothes peg clamps I used on my Oughtred boat. You can see these below and in the top picture. Very cheap and very useful for all sorts of jobs especially in conjunction with a g cramp or two. 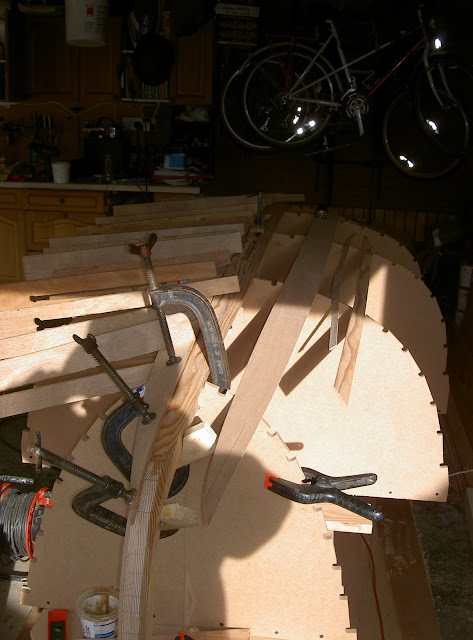 I then used my big clamps to encourage the plank to bend down onto the stem. Start at the midships end and work out towards the stem. Use blocks with Vees cut into them to stop the cramps slipping.
Go gently a little twist at a time, maybe leave it overnight when half-way.  If you get really nervous lay some old towels ( you'll find them in the bathroom) over the planks and pour a kettle of hot water over, this will soften the glue on the ply and help it to bend. Try not to get the MDF too wet. In the photo above the plank looks too high (i.e. towards the sheer) on the stem but that's just the excess jutting out. In fact I found the planks tended to lay too low, towards the keelson, maybe as a result of too much wood left on the stem.
In the end I shaved a bit off the mould notches so that the plank would lie at the right height.
True confession stuff this, don't tell anyone. 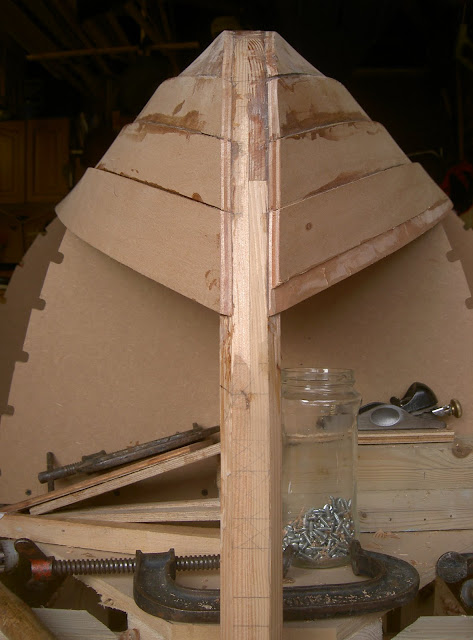 I pressed on regardless, making mistakes and filling them with epoxy.
The other problem I encountered was getting the planks to lie down onto the first mould, they seemed to want to spring off a few mm. Looking back I think again it was due to too much wood on the stem, but I ade a cardinal error by trying to force the planks down onto the mould. 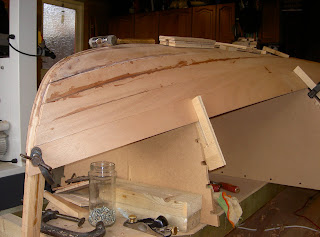 It was too late before I realised what I'd done, if you look below you can see there is a big flat spot on the left hand side between moulds one and two, because I clamped the planks down onto the mould.
Always let the plank find its own course. 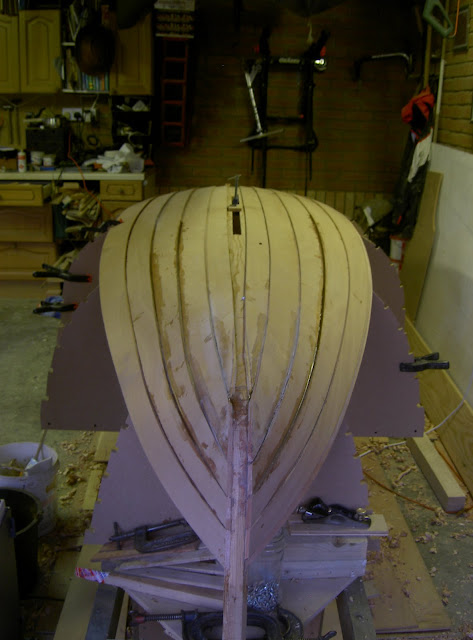 And below you can just see the evidence of how I sorted it, but that's another lesson, if needed. 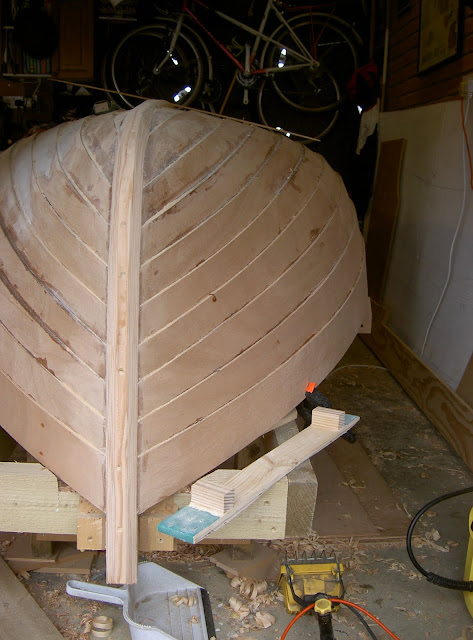 And in the end, does it really matter?

Its only a boat and everyone will be amazed at what a brilliant job you did. 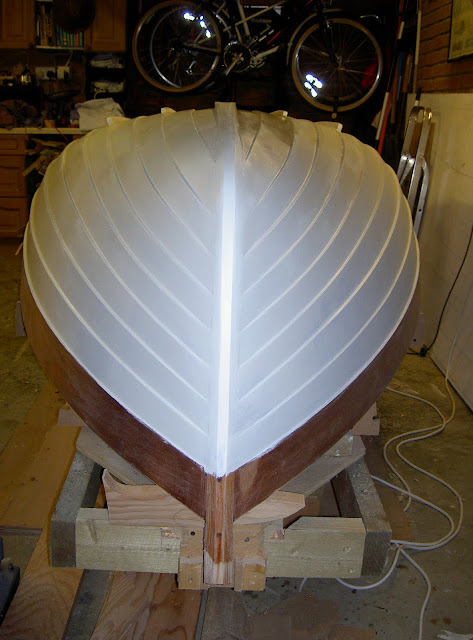 As mentioned in my previous posts my good friend and fellow HBBR member Paul Hadley has just launched his little boat Illusion, based on the Elusion by Matt Leyden.

I love this kind of suck-it-and-see design by trial and error.

Paul has started a blog about his build, why not pop over and have a look. 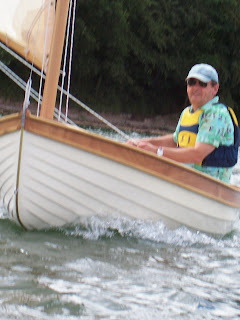 Thanks to Chris and Ruthie Waite for sending these photos taken from their press launch, Rosie Mae. I think the slightly blurred images give a feeling of sporty action.
As well as the water being on a slope you'll see the bow is a wee bit high. 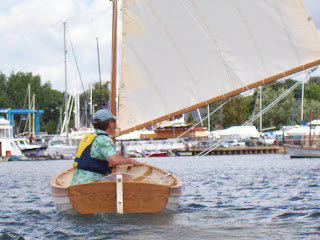 And the transom is a tad low here.
I do need to sit a bit further forward to trim the boat as she's down by the stern a bit. This means sitting on the centre thwart rather than the sternsheets, which in turn will require a longer tiller/extention combination.
Oh and that topping lift needs slackening off a bit.
at July 14, 2010 No comments:

What's in a Name? 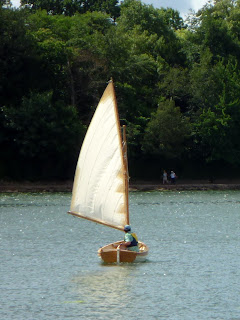 Many thanks to Chris Partridge for sending some more photos of our HBBR meeting at Bursledon on Sunday.
Here are some of us getting ready for the off,
L to R;
Paul Hadley in his prototype Illusion 10 which will eventually sport a sailing rig and small cabin, which he plans to sleep in.
Tim O'Conner with his Iain Oughtred designed Acorn Skiff "Ardilla",
and Chris Waite in "Rosie Mae" which is a bit of a foundling, i.e. GRP hull of unknown origin modified and rigged into the nicest little lugger.
Also present but being shy were Phil Oxborrow in his Prospector canoe and Chris P himself in his Chippendale Sprite. 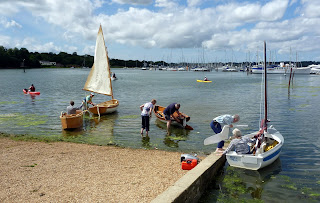 Talking of Names, I was asked on Sunday what name I was giving the Coot to which i replied, "don't name the ones you are going to eat, it just makes it harder."
I do intend to sell her eventually and do have a buyer interested at the moment so I don't want to get too emotionally attached, but who knows.
at July 12, 2010 No comments:

I'm feeling very pleased tonight. I finally managed to get the sailing rig completed on the Coot.

There was an HBBR meeting today at Swanwick, principally to launch Paul Hadley's Illusion, but I also managed to get sailing in the Coot.

I was too busy to take pictures but there is one here on Chris Partridges' blog. http://rowingforpleasure.blogspot.com/

That's me in the natty green shirt larking around in the videos of Paul's launch.