The illustrious editor of the venerated Water Craft magazine has, in his pending tray, an article telling the story of Katie Beardie's conception. I may venture to say its a witty and engaging treatise describing the conversation between designer and client-owner-builder which will entertain and enlighten all. But then I would say that wouldn't I?
However that article is likely to stay in the Illustrious Editor's pending tray until he gets some decent photos of Katie under full sail.  And that Dear Reader isn't going to happen until I get some decent sails made.  Its true Katie did carry a set of sails and spars on her trip down the Thames but thanks to the atrocious weather she never had to show the world how unfashionable and misshapen they were.  That original set was knocked together in a frantic afternoon with no real plan and it shows.  So now is the time to go back to the drawing board and figure out what she really needs. 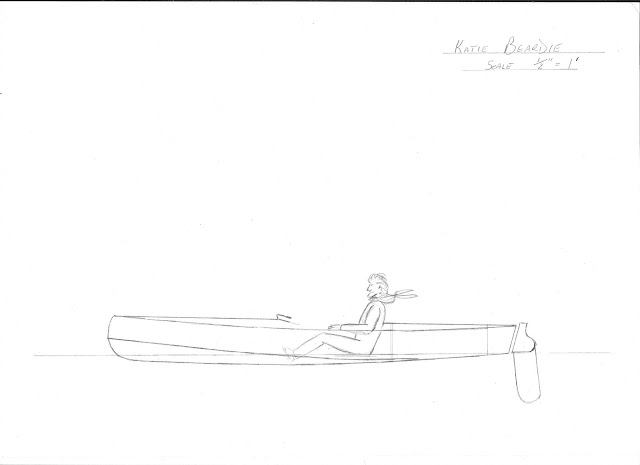 Some things I have learned from others, including the venerated members of the Clyde Canoe Club,  John Macgregor, Polythene Pam, almost anyone who has ever sailed a canoe, and some few things I have worked out for myself, call it personal preference if you like.

Lets get some fundamentals down first. This boat is perhaps better described as a sailing kayak  than a sailing canoe, although by habit as much as convention they are usually referred to as canoes. The occupant sits with their legs stretched out in front like a kayaker, not tucked under them like a canoeist. This considerably  restricts the ability to take a turn around the deck or even change position in anything like a hurry, so you'd pretty well better be able to reach everything from a sitting position.  To-hand, handy.

Any method of increasing lateral resistance, centre-board, dagger-board or lee-board needs to be in a position where the helm can reach it. It must fall to hand, handy.

I decided I was having a centre-board, just like the ancient sea-farers of the Clyde Canoe Club and most of the 19th century American designs. A dagger-board is fine when it's down but a pain when raised. It either sits in the way of the boom, just like on a Mirror, or has to lay around in the cockpit getting in the way. I just have an aversion to lee-boards.  Of course the down side is that there has to be a fairly large centreboard case between your legs in the cockpit but in practice this doesn't really cause a problem, unless you have to stop in a hurry. The centre-board is high aspect, deep and thin to be as efficient as possible and to keep the profile of the case inside the cockpit as low as possible.

The Centre of Lateral Resistance needs to be near the centre of the boat. It therefore follows that  the Centre of Effort of the sail plan needs to end up close to the centre of lateral resistance.
Now perhaps the easiest way to achieve this is to place the mast between your feet and have single sail rigged above the CLR, except that is probably where you are going to want to sit and having the boom and sail clattering round your ears isn't handy in the least.  Another element which comes in to play here is the requirement to keep the CoE as low as possible. Canoes are tippy things and don't need any more encouragement to heel than is absolutely necessary.

So the time honoured way to achieve a low CoE  is the yawl, schooner or ketch rig, and unless you really want the after-most mast appearing from between your thighs and  compromising your forward vision it had better be a yawl.  Here we go then, here's one Cee Dubbs did earlier. 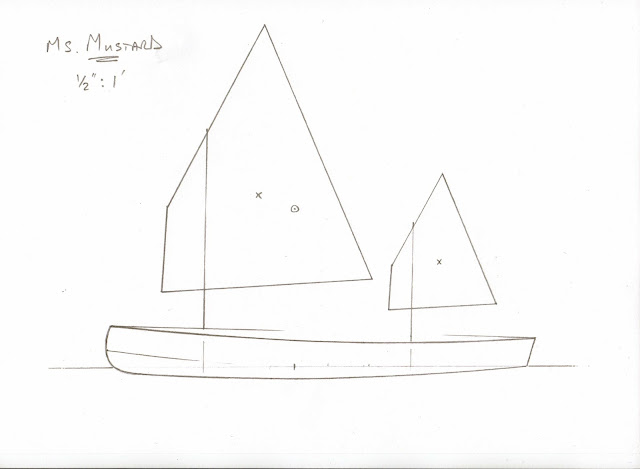 That'll do fine won't it? Yes well,  not quite. I really don't want the boom clattering round my ears when tacking so can we shove the main-sail a bit further forward, without changing the centre of effort?     Like this. 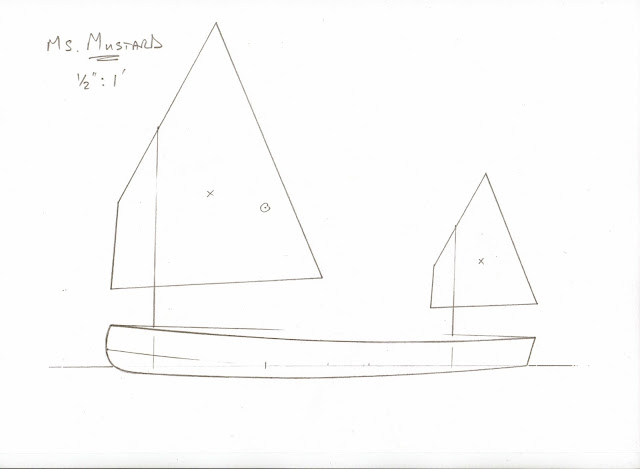 Well that's better, but there's another thing or two.  A mizzen sail can be very handy, that word again, it can keep you head to wind when you are paddling and stop the bow being blown off. It can give you a good push when its too windy to have the while rig up, and still see where you are going. But the thing I discovered with Polythene Pam is that you need to be able to get rid of it in a hurry.
Imagine you are floating serenely down stream with a tail wind and approaching a lock, say on the Thames. Pound to a penny the wind will funnel between the lock gates, you'll pick up speed just when you want to slow down and end up coming to an ungraceful grinding halt by bumping into everything in your path and ending up broadsides across the lock.  You need to be able to brail it away at the yank of a line, and its also good practice to be able to untangle anything which will inevitably tangle when you lease want it to, so having the mizzen mast close behind the helm is a good idea.
A leg o mutton sail forgoes the added complexity of a yard clattering round your ear which is why Katie is having a triangular mizzen, which can be brailed away at the pull of a single line, and unfurled just as easily.  I used this system on the Thames Raid II and it worked very well.

So here we have it.

I realise I have re-invented the wheel, ending up back where the Victorians started but at least I can say I have thought it through rather than following blindly where others have gone before. 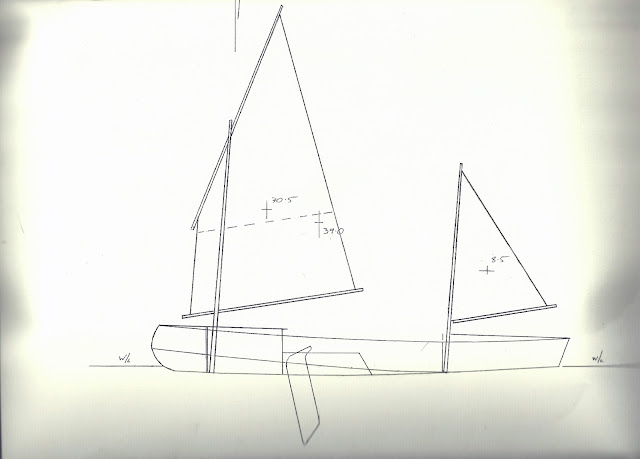 Now all I have to do is make it, which due to family and domestic issues is likely to be a month or two so the Illustrious Editor will have to wait a bit longer.

The observant will have noticed that the sail plans drawn by Cee Dubbs refer to a certain Ms Mustard. This was the working title for this design during her early stages.  Polythene Pam was given her name because of her poly-tarp sails. Music Lovers will know that Polythene Pam is also a song on The Beatles Abbey Road album.  Looking for a name for her replacement I came up with Mean Mr Mustard which is also on Abbey Road, this became Ms Mustard as a boat should always be a she, and somewhere along the line this got changed to Katie Beardie, which Cee Dubbs and I settled on.  So there you go.

Comments are as ever welcome and indeed encouraged.
at February 19, 2013 4 comments: