I got a phone call from Alec Jordan a couple of weeks ago. I've known Alec for a few years now and recently his calls have been to introduce me to new Coot builders who have joined the ranks building from  one of Alec's kits. We have quite a self help group going now.  So I was quite surprised this time when Alec asked me what size my garage was!


Alec has been the main instigator behind the Scottish Coastal Rowing resurgence which I've written about previously here  Fae Fife?  and here Happy Birthday Skiffies. 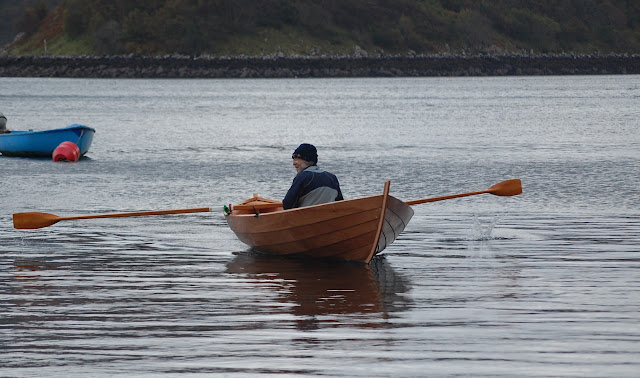 You'll remember that Alec got together with Iain Oughtred who designed the fantastic St Ayles Skiff to encourage competitive coastal rowing and provide kits so that communities could build their own boats cheaply.
The project took off and the St Ayles Skiff has now become very popular throughout Scotland and abroad with communities and groups finding a common cause in building these beautiful boats and then going out to thrash their neighbours from near and far. 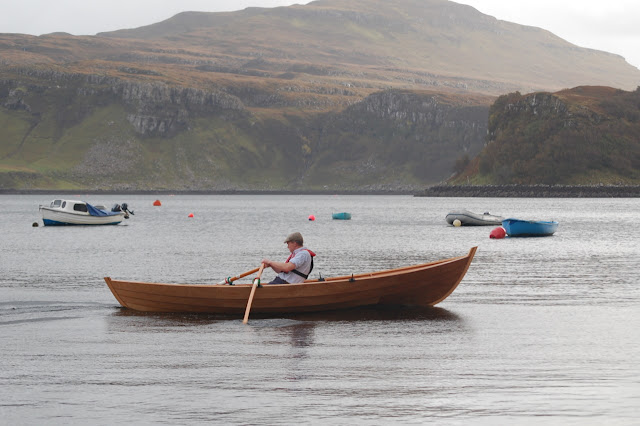 Alec felt there was a case for a smaller boat which could be rowed by one or two people maybe with a lightweight cox.  It could be used by clubs when there wasn't a full crew available or by people who wanted to build and own their own boat.  And so the Wemyss Skiff came about. 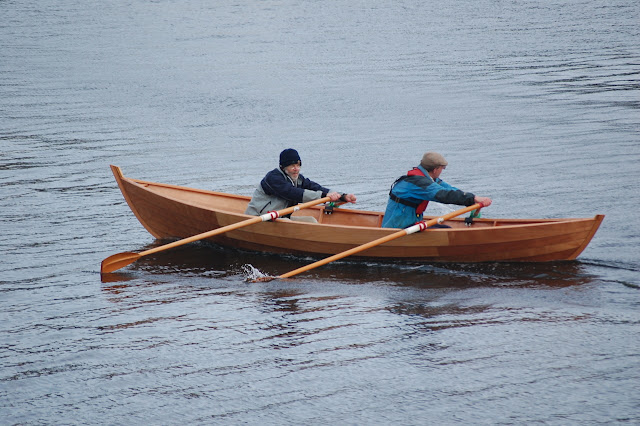 Once again the boat was designed by Iain Oughtred and this shows in the distinctive lines and close family resemblance to the St Ayles skiff.  The boat is 16ft 6ins overall and has a beam of 4ft 9ins.


Once the prototype "Swan" was built Alec took it up to Portree on Skye to let Iain try her out, which is where these photos were taken. The top photo shows Iain trying her out single-handed with Alec below and the pair of them pulling together in the last one. You can see how much flare she has, giving her bags of reserve buoyancy making her a very good sea boat. She is also rumoured to be very fast!


There is some development work to be done to include buoyancy tanks and kits should go into production at the end of November. So if you really hurry you might just get one for Christmas.


Alec told me that Iain had already started thinking of ways to improve her even more, including making her longer, but Alec was concerned it wouldn't fit into an average modern garage, hence the phone call !!

Alec is marketing kits for the Wemyss Skiff from Jordan Boats

You can find out more about Scottish Coastal Rowing here.

Here's one I made earlier.

I've had literally hundreds of enquiries (well one actually) about the progress on Katie Beardie recently.


So its time for an update. 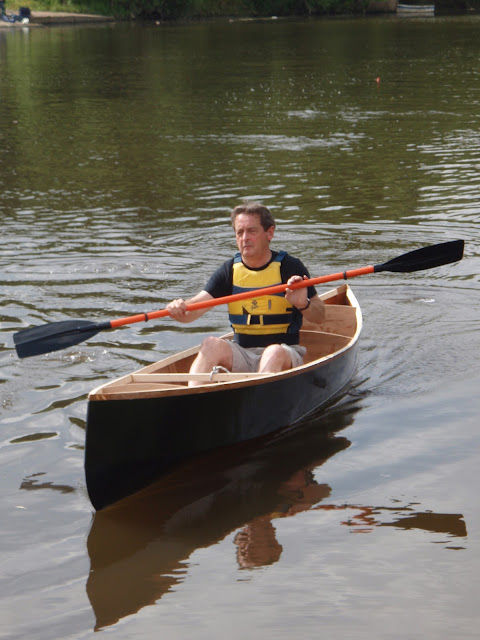 Regular Readers will remember that Katie was launched back in July, but that was only to see where she floated, and if Cee Dubbs and I had got our assumptions right and that my ass was in the right place.


Everything looked to be tickety boo so it was back to the Port-na-Storm research and design lab for some development work.


Of course nothing happened for several weeks while I dealt with the ongoing pleasures and challenges of being son, husband, father, and grandfather, sometimes all in the same sentence.  I'm sometimes a brother too but my sister likes to have me all to herself on the phone. Usually for a couple of hours.  However, I digress..............


There are of course no detailed plans for Katie, well actually there aren't any plans at all, other than two sheets of A4 showing how to cut the ply for the planks, and I even managed to make a resounding cock up of doing that!  So when it comes to internal layout, rudders, centreboard, sailing rig etc. the world is indeed yours to doodle with.


I love this aspect of the build, it reminds me of knocking up carts and rafts when we were kids.  You got an idea in your head and immediately started to build it with whatever happened to be lying around. Straight from your head to the wood. However it does mean you can waste a lot of plywood! 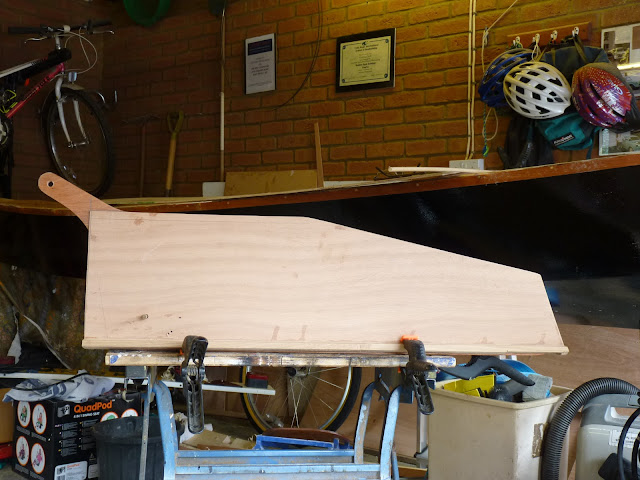 I made my rudder and centreboard ages ago, because I like to get as many of the fiddly jobs as possible done before the hull is built. However it does require quite a bit of guess work if you haven't built the hull its going to go in yet.


Of course the great big obvious elephant in the room is you have to have a centreboard case bang in the middle of the boat just where you don't want it. So the challenge is to try and make it as unobtrusive as possible while still trying to ensure it actually does its job as intended.


And so, here we have it. A low profile case, with a longish board resulting in a high aspect ratio foil i.e. deep and narrow which should theoretically do the job. 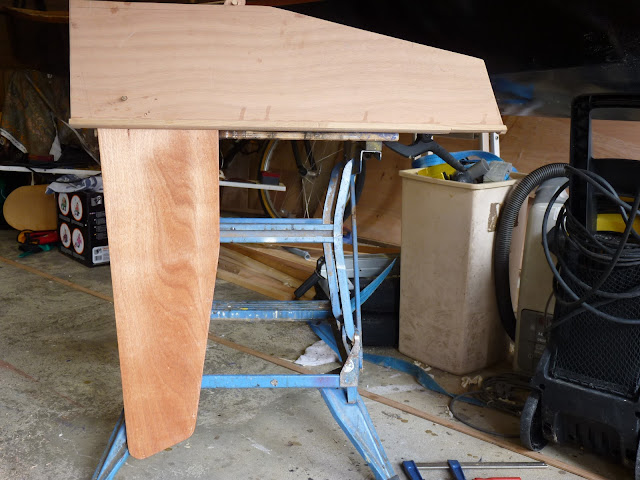 After a conversation over at  HBBR  when Frogsider discovered the hard way that he had under engineered his rudder I consulted the good doctor and we agreed that the 6mm centreboard I'd made probably isn't going to take the lateral forces expected of it once I get in and the wind starts to blow. So after hunting around the garage floor a piece of 4mm ply was found and the two duly sandwiched together. Thickening up the board of course meant the case had to be widened so the old Japanese Pull Saw split the case and wider spacers were inserted. 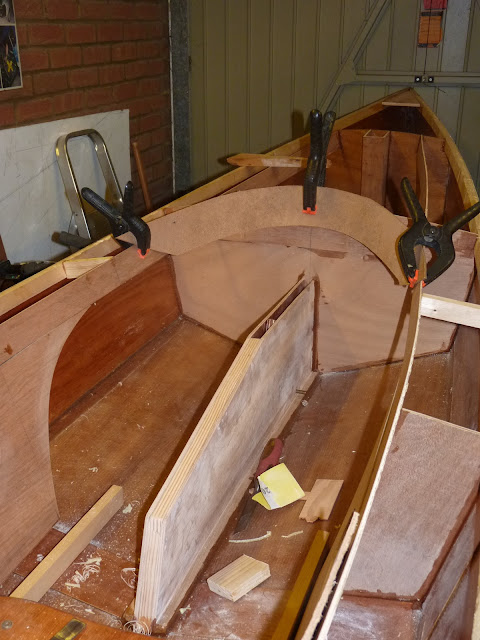 The jig-saw ripped a hole down the middle of the floor and the case was epoxied in against the new centre bulkhead.  At this point the horn on the centreboard had to go as it would foul the bulkhead. A little detail which hasn't quite been resolved yet.  You can also see where I've started to shape the side decks, the forward mast step and a hard-board template for the coaming. 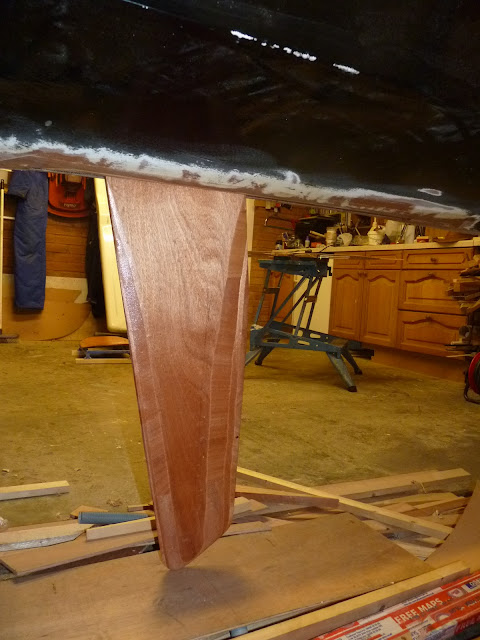 The eagle eyed will have spotted that the original board is as flat as the proverbial witch's, due to its lack of thickness so the opportunity was taken to carve some shape into the new wider board. 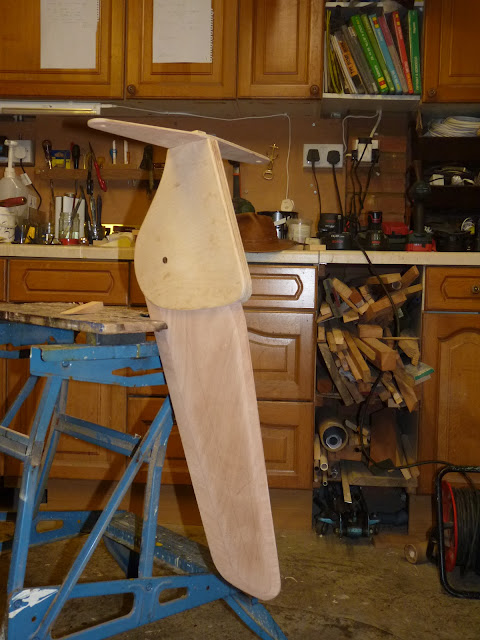 While I was at it the rudder needed beefing up,  I also decided I didn't like the shape of the original so this time I just made a new one out of some spare 6mm and then gave it some profile to match the centreboard.

Rear of the Year

Here's a quick run round the rest of the boat show with a few of the other boats which took my fancy. 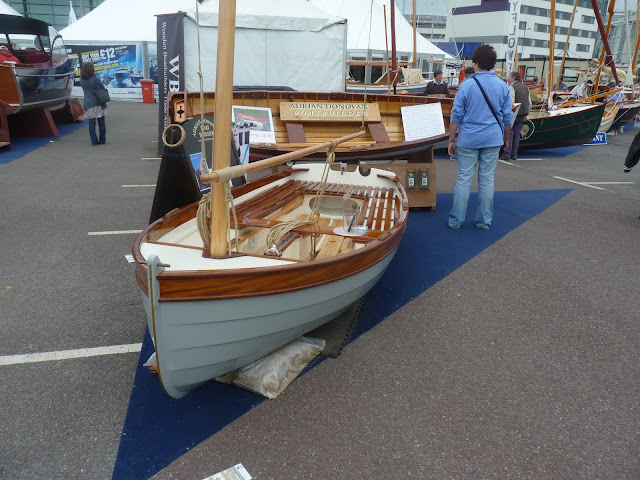 I've been an admirer of Francois Vivier's boats for quite a while now. His boats are all very traditional in design, obviously drawing on French heritage, and he seems to have a superb eye for a sheer.

I've had one of his boats on my future build short list for  a year or two, but which one?
At first I was drawn to the Beg-Meil with it's side decks and bowsprit, very classic, but then the more work like Ilur, which is the same hull with a lug rig, or the Aber, which is a little bit smaller but very pretty.


Francois has recently extended his 8 and 10 foot tender Morbic up to 12 foot, and it was really good to see it for real, somehow it looks much more attractive in real life.
Decisions Decisions!


This one was built by Adrian Donovan.

Will Stirling who trades as

brought along a couple of his smaller boats.


This gorgeous 14ft Clinker Dinghy really is a stunner, and shows how it should be done. 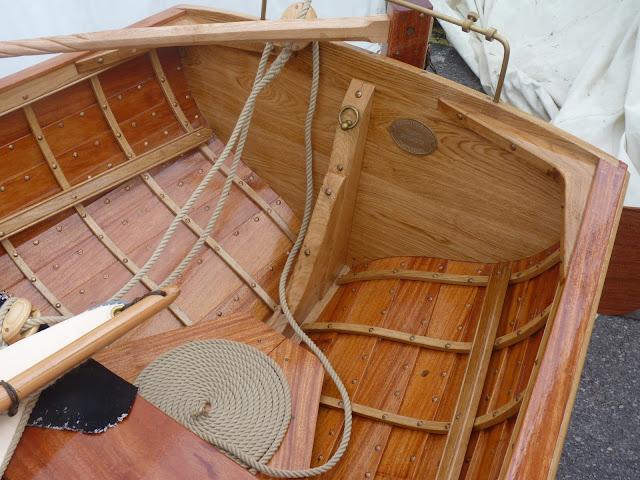 Its good to see she has a beautifully finished traditional Lug Sail rig. 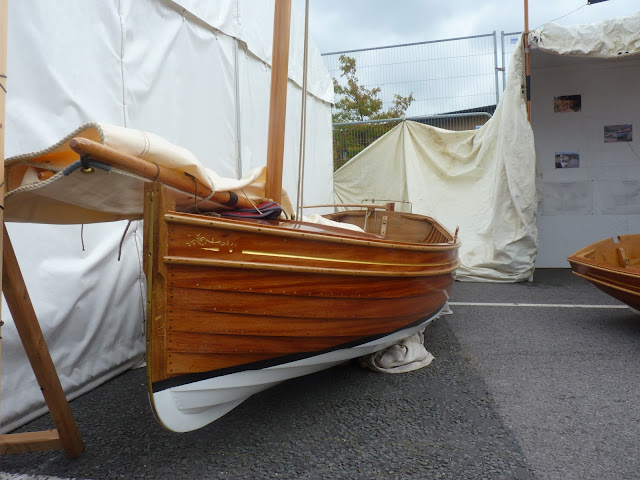 This 12ft Rowing Boat is also a bit of a stunner. 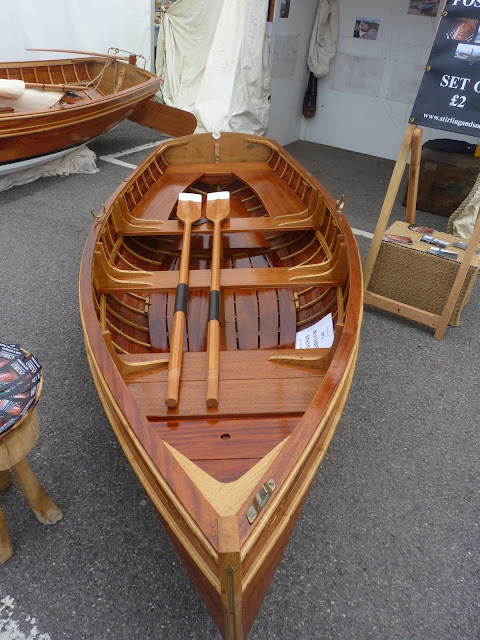 Will builds a range of boats from little tenders right up to his Smuggling Lugger Alert.


He very enterprisingly brought along sets of plans for the public to purchase, presumably as much for their aesthetic appeal as anything.


And Finally!
But by no means least . 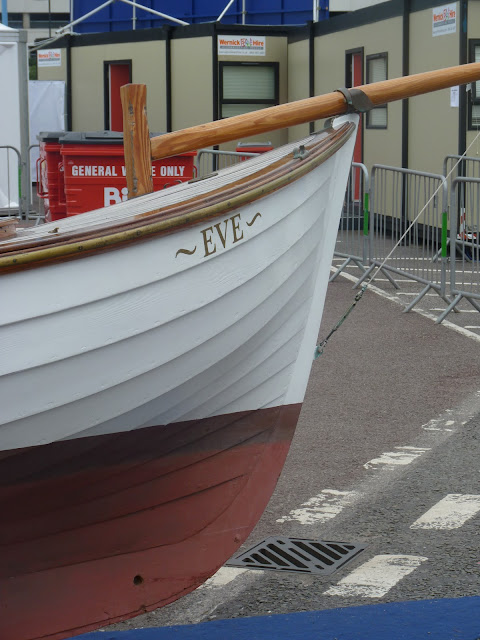 Eve, all the way down from the Northern Isles of Scotland is an Orkney Yole built by
Ian Richardson of Stromness.


Now the weather up there can be a bit extreme, so their boats have to be robustly built, which this one certainly is, but they also have to be capable of handling the conditions. 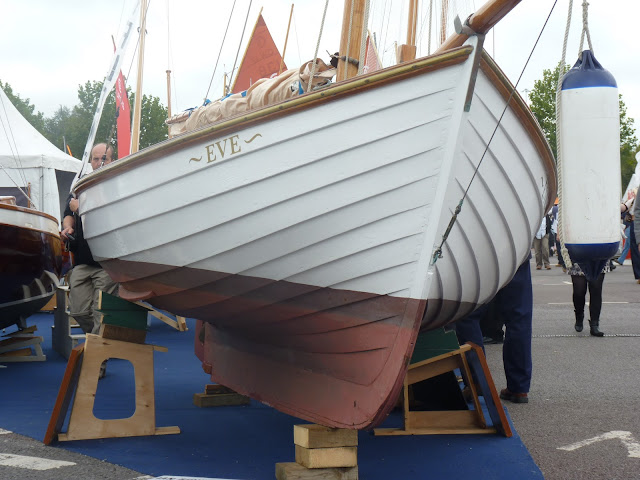 Look at those firm bilges and that deep keel. 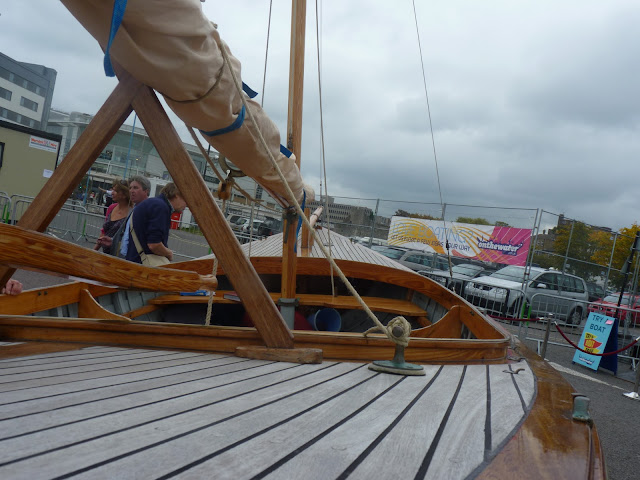 But oh! Dear Reader, feast your gaze on Ian's speciality, 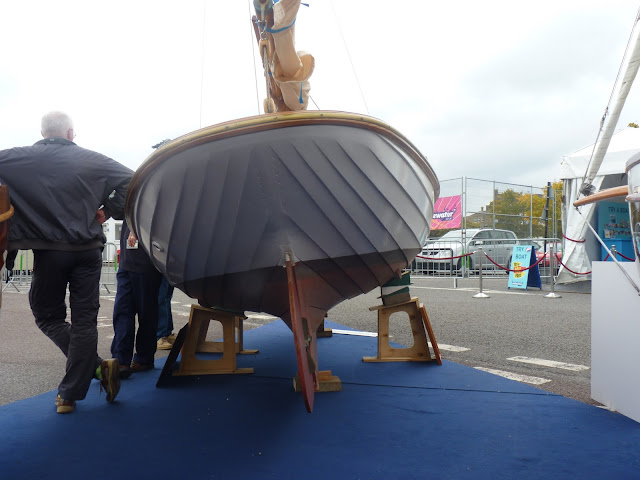