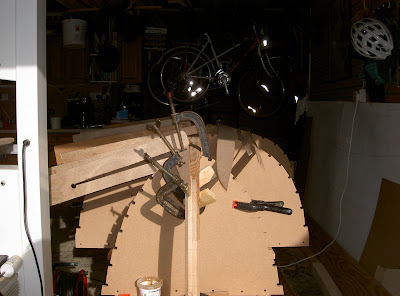 Its now three months since i started the planking. December turned out to be one of the coldest in years and January wasn't much better. So its hardly surprising that very little progress was made. Even if I can stand the cold, the epoxy was taking an age to go off. A time to stay indoors and read a good book. We'd made a family decision to stay in the south over Christmas as Chloe wasn't allowed to fly, so we had the most relaxing time we've had in years and only felt slightly guilty. 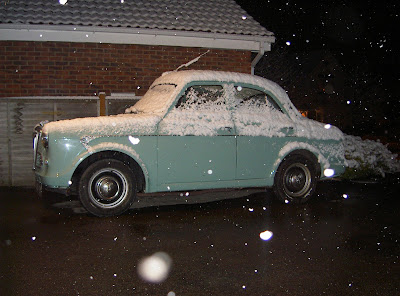 January brought the worst (or Best) snow we've had in 20 years which caused chaos and was loads of fun! But again the temperatures were hovering around zero which isn't good epoxy weather. Gradually things warmed up a wee bit and i could start planking again.
I have to confess I struggled a bit at first. Having had such a long lay off since the last build I was clumsy at first, the tools didn't sit comfortably in my hands, and I was making silly mistakes.

I'm also having to wear specs this time round as old age doesn't come un-announced! The first couple of planks were tricky, they seemed to want to lie too far down the stem, i.e. nearer the keelson than they should and took some persuading to lie on their marks. Looking back i'm sure its down to various creeping inaccuracies on my part. I was pretty rough cutting the gains so a fair bit of epoxy was required to cover my indiscretions. My moral was at a low point at this time and I was wondering why I ever thought I was a boat builder.

Any notions of a bright finish went out the window, still I percevered and the weather got a we bit warmer which improved the epoxy cureing times and the moral. I juggled the planks into shape and gradually improved my hand to eye coordination.
A few more planks went on and things were beginning to look up, there's still a long way to go though. I'm now half way through the planking. 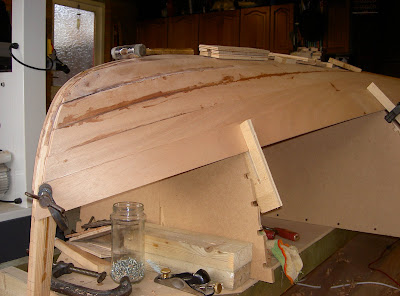 All of this activity in the garage was of course just a diversion to the more important activity which was going on elsewhere. Very gradually and with the inevitability which nature intended Brooke Lyra Joan Gover was getting ready to make her debut and on Friday 20th Feb she arrived, making her grandad very proud and letting just a bit of perfection into his life! 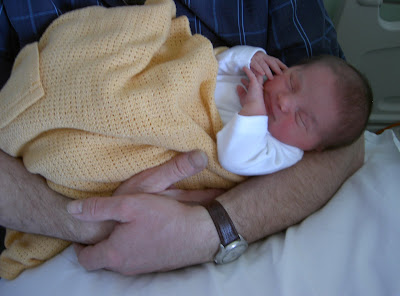 And a pair of Val's knickers. 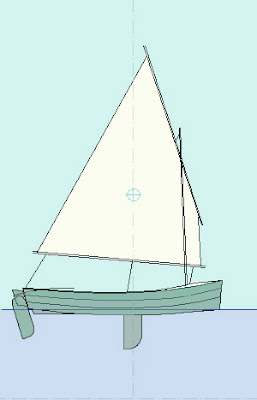 Back in the mists of time, well last year to be precise I started playing around with some drawings of a little 11ft dinghy, The design developed into what I as least think could be quite a pretty wee thing, for various reasons the project was shelved but not forgotten, and not before I got round to making a wee model. I took some photos at the time but never got round to posting them so in time honoured fashion Here is one I made earlier........................

The design brief I gave myself said that the boat must be self jigging without the need for a building frame. it also must have more than sufficient buoyancy, as it was likely to be a wet sail, so to meet both these requirements I designed it to slot together egg box fashion incorpoating enclosed buoyancy chambers.


Here the buoyancy tank sides slot into the central frame 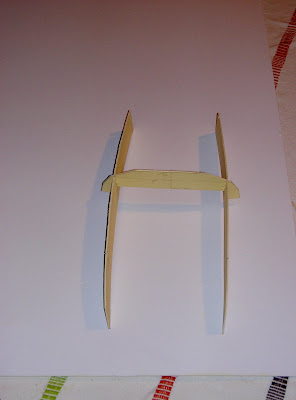 The forward bulkhead is then added...... 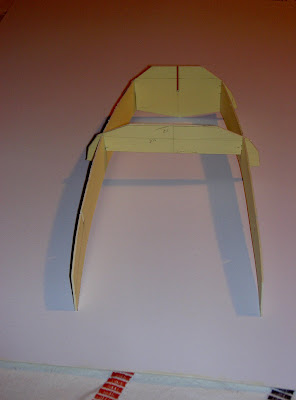 Followed by the aft frame, this gives the curve to the side tanks. 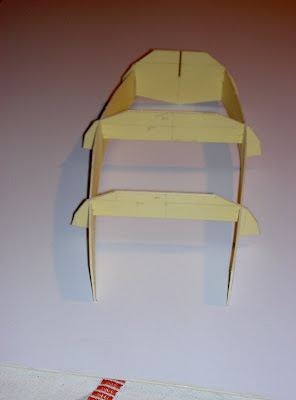 The transom goes on next 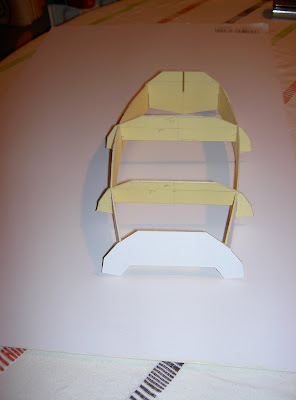 The thwarts can now be added to help square everything up and add rigidity. I'm not at all sure that all the gubbins forward is really necessary, I was trying to give plenty of support for the mast and foredeck. 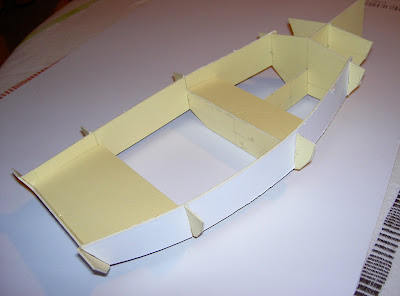 I also wanted plenty of dry storage space so that she could be used as a mini camper, the space between the forward bulkheads, under the thwart and sternsheets would be a dry locker with the other spaces and side tanks full of buoyancy foam. 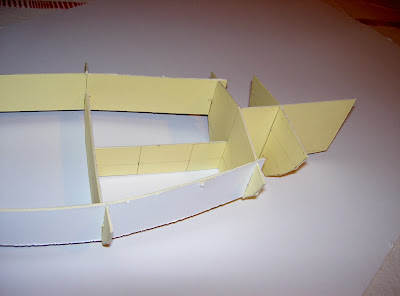 Now she gets turned over and the bottom fitted 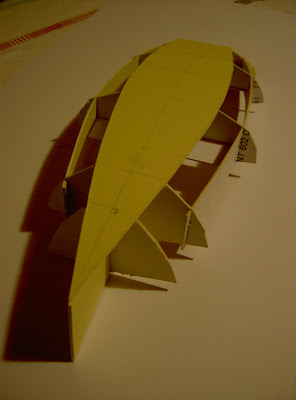 Its now easy to see where the planks will go
The plan was to stitch and tape the lowest chine and have a lap joint on the others. 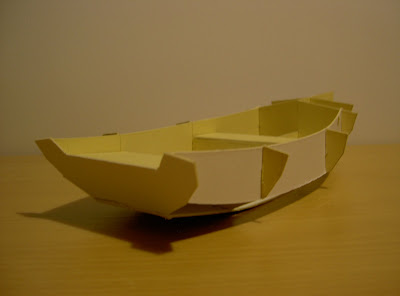 Here's an aft view with the planks added. She has side decks just wide enough to sit out on and would have a curving combing to set off what i think is her jaunty sheer line. 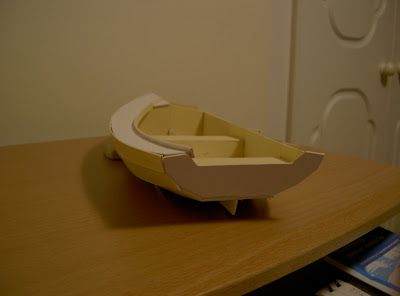 The stem is plumb to keep the LWL as long as possible but I think the final design would have a curved forefoot to help her ride up a beach.

The rig would probably be a balanced lug for simplicity but she might look good with a cheeky bowsprit.
maybe one day. 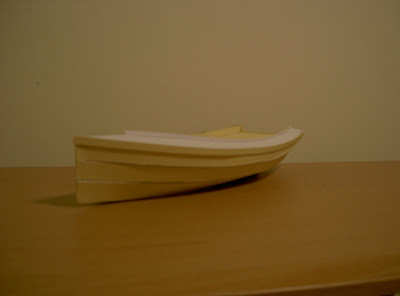