In terms of all time cock-ups building Katie has not only taken all the biscuits, she's now standing in line for a plate of blancmange. 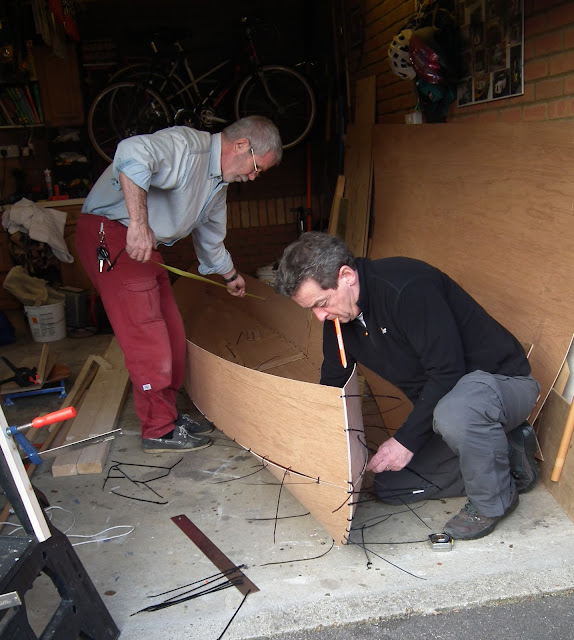 After my enormous bollox of cutting the forefeet (forefoots?) upside down, Cee Dubbs was so worried about his creation that he came round to have a look last Sunday.
Chris Partridge of Rowing For Pleasure was equally intrigued and came to help eat the biscuits and take some incriminating Photos.
I'm sure Cee Dubbs just wanted to check I wasn't doing anything else wrong,  and guess what?
He wasn't disappointed.
He immediately spotted that she looked a bit "Chipmonkish".
A bit too full in the cheeks maybe.
The tape measure told the true story. I'd let the batten lie too full on the  floors when I was marking them out, instead of keeping it to the Cut Lines clearly marked on the plans.
On Monday I un-stitched it all again and had another look. below you can see the new correct position of the batten.

What's an inch between friends? well quite a lot actually. 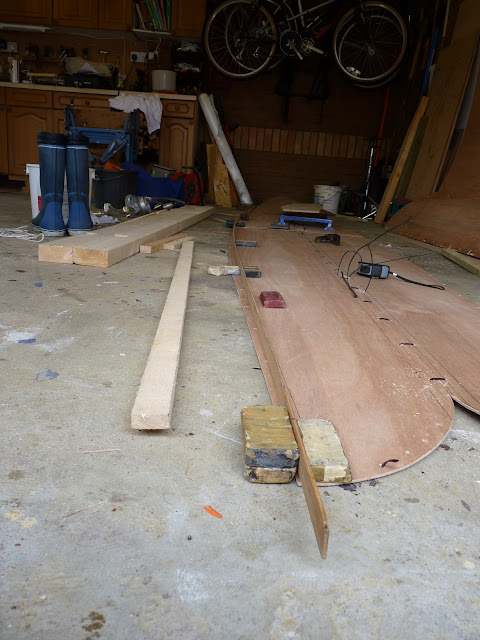 Now that inch had to come from somewhere, and that somewhere is the aft floor which is a corresponding inch too narrow on each side.
The forward floors have been re-cut to their correct shape, the aft floors will just have to stay as they are. Life goes on,  the world does not stop revolving on its axis.
I have stitched it all back up together again and there is now a world shortage of cable ties, at least in the SO postcode district.
So here we are beginning to look the way Cee Dubbs intended despite my best efforts at sabotage. 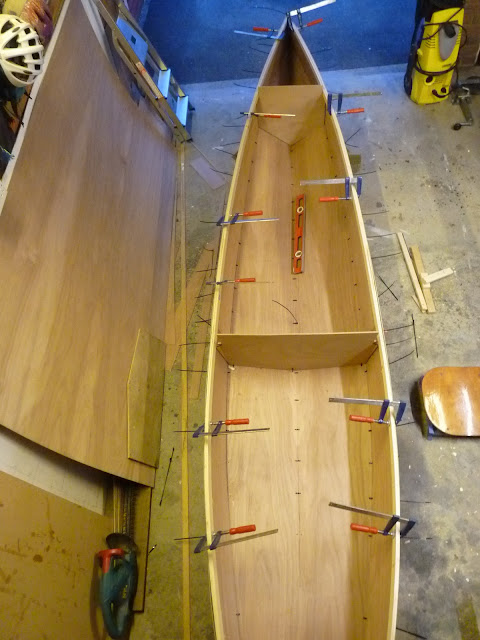 I'm planning to put a couple more bulkheads in to stiffen her up and define her shape more accurately then I'll start to glue her up. 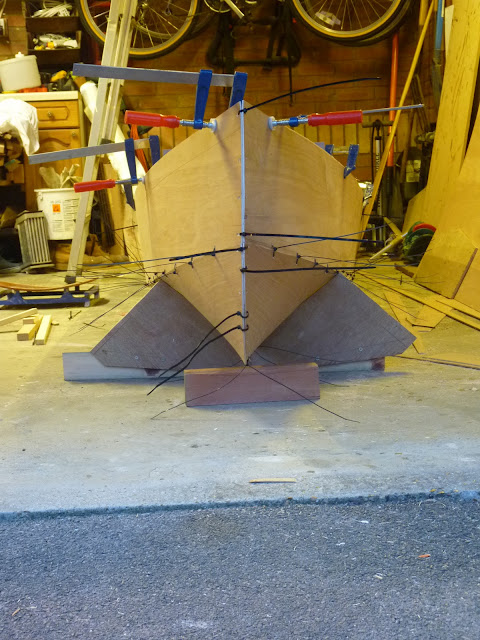 And finally,
regular visitors may have been wondering what happened to Cee Dubbs Rhythm Stick.
Well, after the resounding success of the initial trials he has transferred his Yuloh to Rosie Mae and was spotted last Sunday taking her for a spin.

Thanks to Chris Partridge for the use of his clip.

The more observant of you will have spotted me sailing by in Coot during the first few seconds of this clip.
at March 27, 2011 No comments:

The Man with the Wind at His Heels.

Here's a short video of Illusion on the water.

Shot with one hand while trying to sail Coot, hence the shakes.

Its Just an Illusion

Some of the HBBR Crew got together down at Swanwick yesterday for a messaround.
I think these things are really an excuse for a natter and an hour or so in the pub but we did actually do some sailing, rowing, paddling and even yulohing if that's a word. 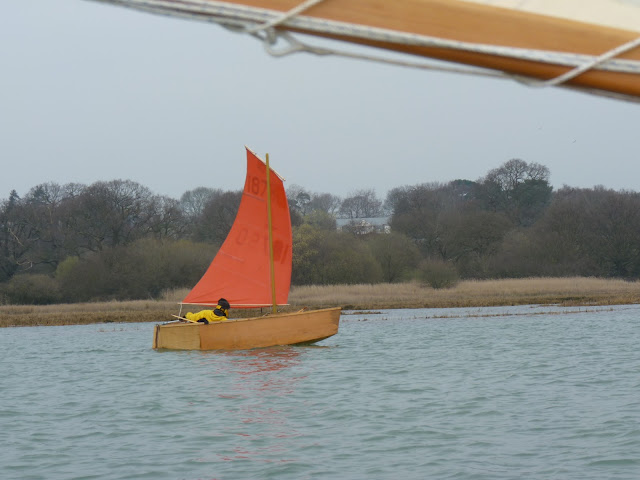 Paul Hadley brought along his experimental micro cruiser Illusion which is based loosely on the designs of Matt Leyden.   This is the first time I've seen it under sail and she seemed to go really well with the cut down Mirror mainsail donated by Phil Oxborough.  The Mast is off an old windsurfer.
Further discussions are now under way about how to keep that bow down in the water.  Still he seemed a very happy camper. 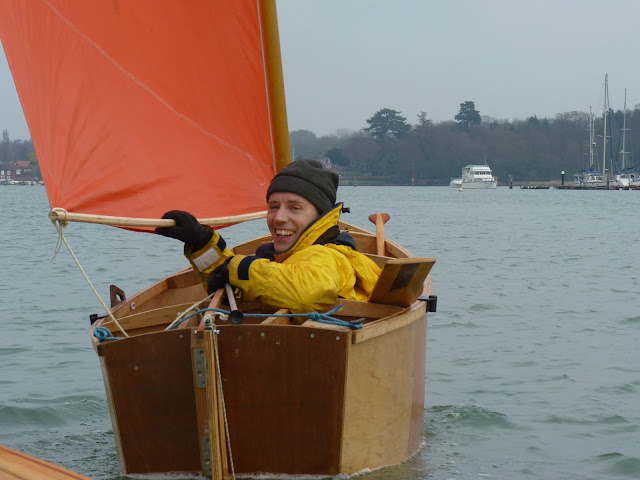 For a quick update on the latest progress I can do no better than direct you here.

http://rowingforpleasure.blogspot.com/
at March 20, 2011 No comments:

Katie gets stitched up. 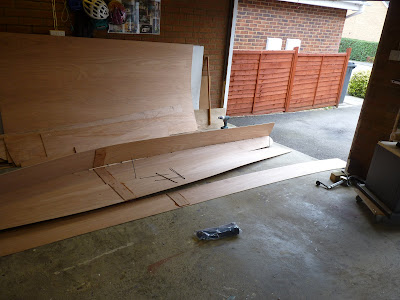 Starting at the middle, stitch the plank forward...... 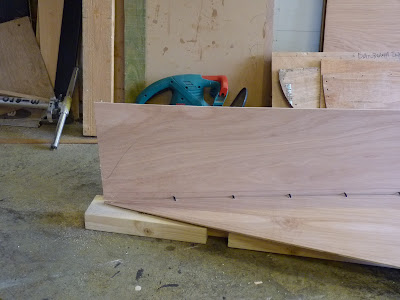 Then Aft, I've trimmed off the surplus from the plank here.
The other plank will be put on oversize and trimmed to fit. 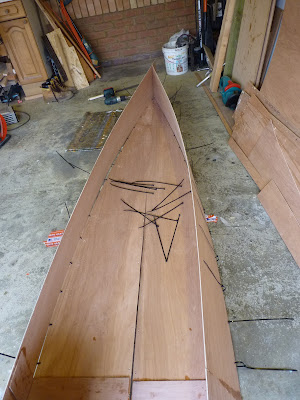 Then stitch the other side 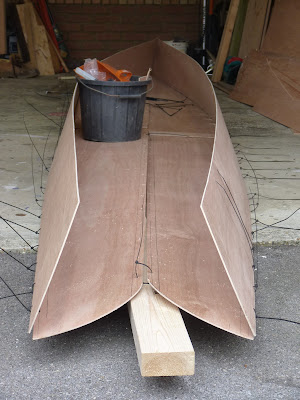 Leave the Bow until last 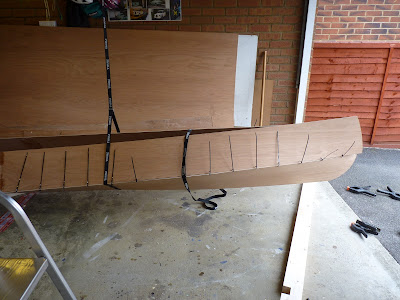 I applied a bit of traction by suspending it from the roof beams with a luggage strap. 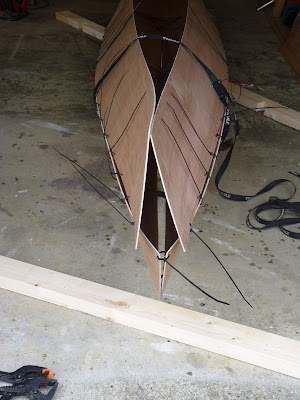 This just helps to get it all into an approximate position without having floppy planks flapping around.   The bow then pulled in very easily 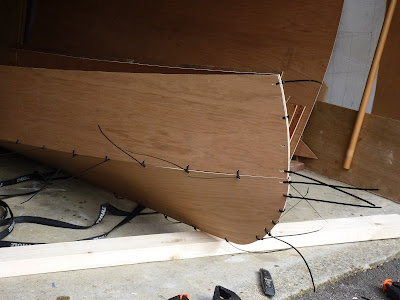 The keel was then stitched up.
There's still lots to do to wiggle her into shape but she looks right this time! 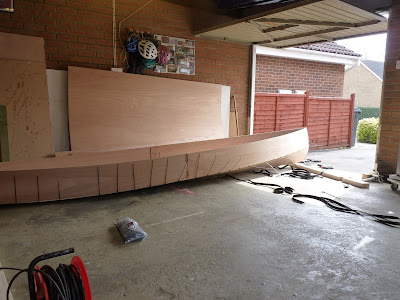 Katie Gets a Nose Job

There that's better, spot the difference ! 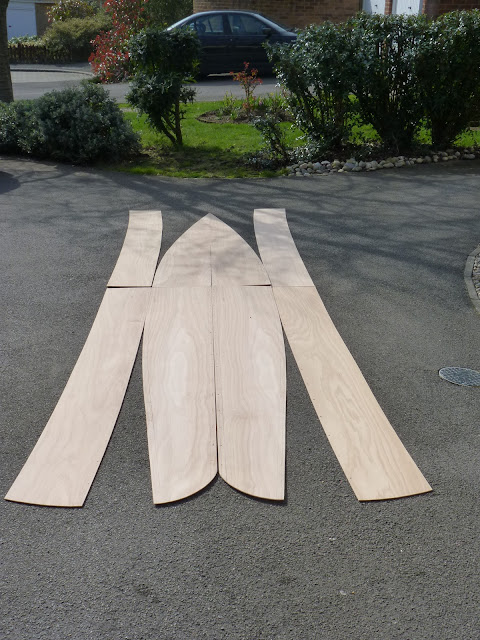 What Katie Did Next

I wrote back to Cee Dubbs.
Dear Cee Dubs.
My first reaction;  Bugger!
On reflection, I’m pleased you have spotted the problem so quickly.
Firstly because I could have spent hours trying to make a pigs ear out of a pigs ear which would not have helped my Blood Pressure, and secondly because I really couldn’t see how the thing was ever going to stay upright. Of course I never doubted you for a minute..........................................................
We had a saying at work when people asked for help with software.  R.T.F.M.  Read the F*****g Manual! And of course looking back at your plans that’s exactly what I didn’t do. So I know who to blame, we’ll just put it down to experience.
The ply came from the packing case which the Coot Kit arrived in so I haven’t lost anything but my time and people will tell you I have plenty of that .
Wicks had some nice looking Birch ply the last time I looked so maybe I’ll see if I can be ecologically sound and try some of that.
It hasn’t been a good week.
Princess Chloe and Mad Jack Gover got engaged last week and at the moment her favourite date for the nuptials is June 11th.  That's Beale Park Boat Show, and the start of the next Thames Raid. I had previously arranged that Coot would be in the Kit section of  the Amateur Boat Building Awards and Katie would be in the  free-form sculpture section while we all get excited about going on our holidays, the fat lady hasn’t sung yet but she’s clearing her throat.
Yours,
Grimbly Deadrise.
He Replied.
My Dear Deadrise

When I realized what had happened, I feared for your sanity and your will to proceed under such adversity; I am greatly impressed that you have not taken to your bed, sobbing and swearing never to run away to sea again.  However Nil Protractor Carborundum as we say in the boat building business.
You really must learn to control your family, all these extraneous events will seriously cut into your creative activities, to say nothing of your life afloat.
Cee Dubbs


That’s extremely naughty of her
Girls like that can get a bad reputation.


You have the forward ends of the floor strakes rotated so that the chine edges have been put together as the keel.  I am afraid this is what it looks most like – that would be enough to give a girl the real hump and the delight of any passing megaptera.  It will also give you the hump because it means a new set of floors forward.  Having cut the forefoot in means they cannot be undone and turned over. 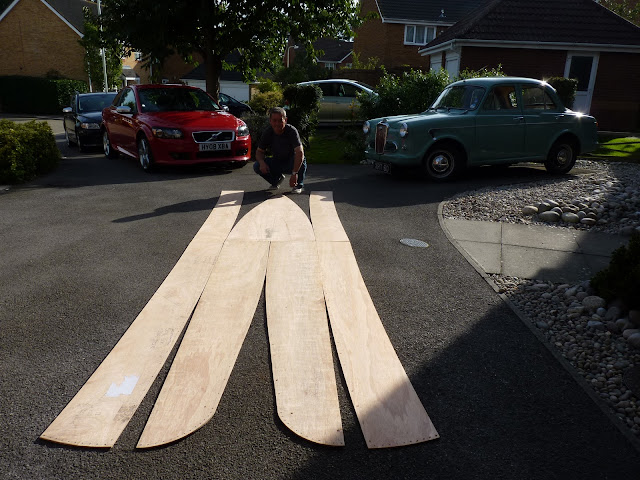 Looking at the picture, if you put her together as she is laid out on the drive then that is definitely what you have done.  The keel edges forward, while starting to ‘V’ as the forefoot is pulled up, are actually a straight contiguous line; they do not diverge until you reach the curve of the forefoot itself. 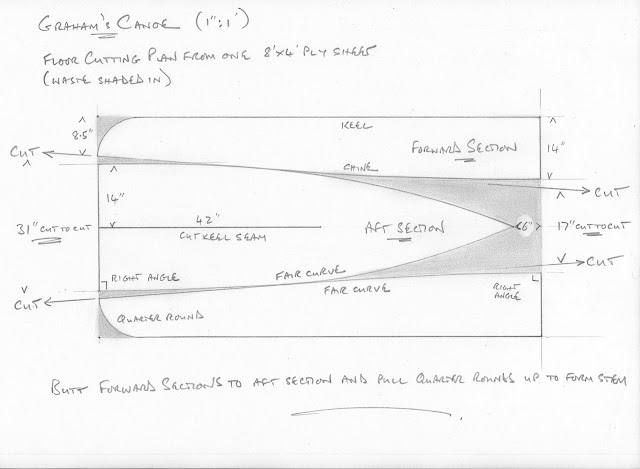 Go back to my A4 diagram and look at the floor plan – the word keel is written immediately underneath the top edge of the sheet and the forefoot is marked to suit.  The reason I recognize the symptoms are that when I put Octavia together first, she would have passed muster as banana.  In her case, I had to take the rear section of the side strakes off and turn them over to get rid of a monumental rocker.  I had not got as far as cutting any ends in so was able to undo my sins and wickedness without penalty.
Back to the drawing and a new board, I’m afraid..................

Last Monday and Tuesday I knuckled under and started to stitch Katie together.
Almost as soon as I started I got an inkling something was wrong.


Too much Vee in the hull amidships.  She's going to be far too tippy!


But as I started to stitch the bow together it became obvious all was not well.


After hours of stitching un-stitching pushing and shoving she refused to take the shape Cee Dubbs intended for her so finally in desperation I dropped him a line.

I got Katie stitched up as best I could today.
What do you think? 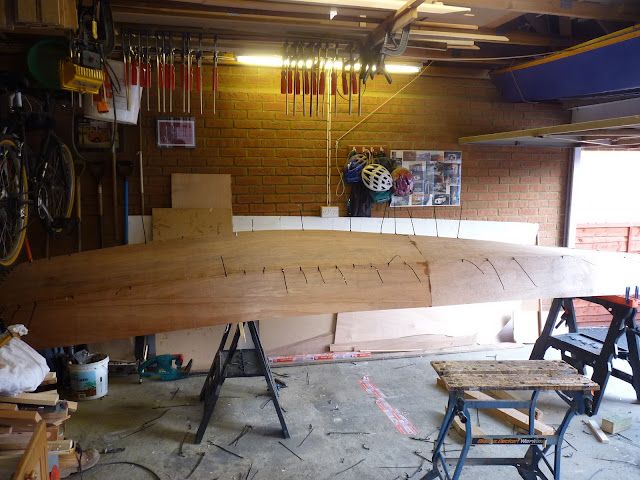 I’m not sure if its intentional but She’s looking a bit “humpy backit” as my granny used to say.
At the join there’s five inches of dead-rise which seems a bit too much Vee, and as you can see there is a lot of rocker forward of that.
I’ve tried getting the Spanish lassie (windlass)  to pull her down at the forward tressil is but she’s having nothing to do with it. 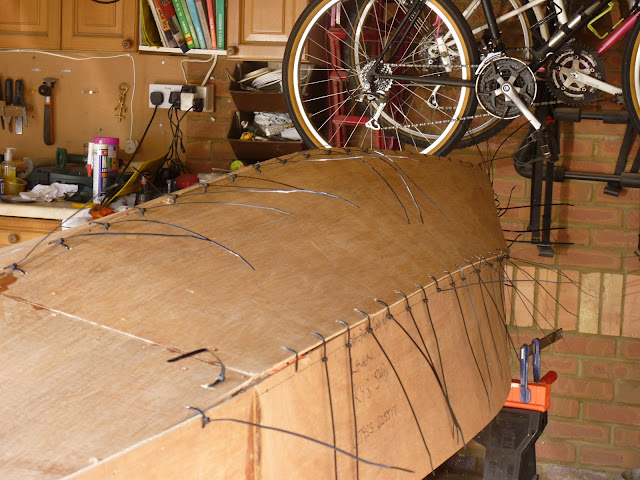 I’m wondering if I’ve left too much wood when cutting out the curves for the bottom planks, maybe the line needed to be straighter,  and I’m considering a Keelectomy, taking a sliver off the garboards and then pulling them back down to join but before I take such drastic action thought I’d seek the designers thoughts.
I tried putting a temporary bulkhead in with what I thought was a suitable amount of deadrise i.e. ” but it seemed to make matters worse and made the aft end Oil-Can, so I took it out again. 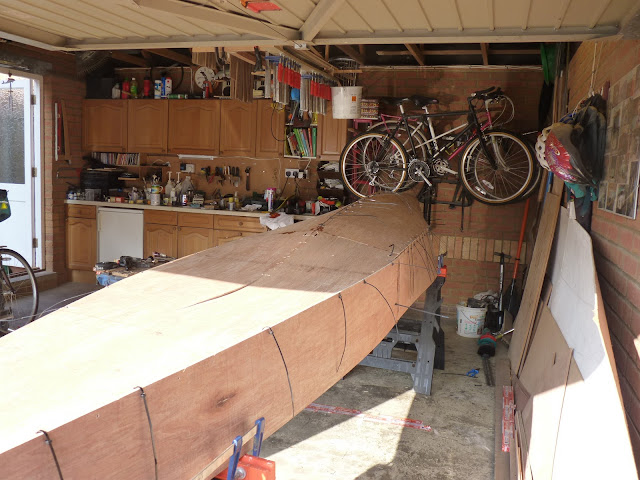