Does my bum look big in this? 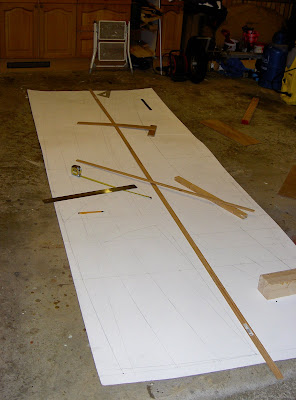 Santa didn't bring me a new boat this year so its on with the fun! After braving the Christmas crowds heading north for the season, being abandoned uncerimoniously at Southampton Airport by FlyMaybe (but not today sir your flight has just been dumped thank-you for flying maybe), and being really nice to all of my wife's family on Christmas day, I reckoned I was due a couple of days r'n r. So I took a few day to catch my breath before heading back to the grind.

I wanted to make sure that the measurements and lines of my wee boat would be fair and as I couldn't think of any better way to do it i decided to loft it out full size. This would also give me a better feel for the true size of the thing, so it was off to B&Q for a couple of sheets of hardboard. I gave these a couple of coats of white emulsion which was kicking around the garage, joined two pieces to make a twelve foot length and started to lay down the measurements. 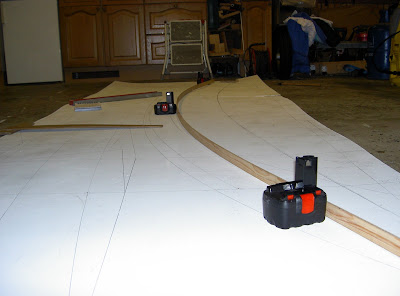 I really enjoy drawing and this was fun on a grand scale. I scarfed a couple of lengths of pine to make up a long bendy stick to lay off the lines from the mould shapes, using a combination of panel pins and anything heavy which happened to be lying around. I was quite pleased with the results, there weren't too many mistakes and all the lines seemed very fair, I did however make some serious changes to the stern as a result.
Having such a large drawing on the garage floor actually makes it difficult to see properly, no matter what angle you look at it from there is always some form of distortion. Looking at the aft quarters, the sheer line seemed to tuck in to the transom rather to much for aestheic pleasure. Looking back at the drawings on the computer confirmed that the transom was too narrow. I stood in the garage moving the bendy stick in and out until it looked right, hey presto interactive boat design, the stern is now a full 4" wider in the beam and looks all the better for it.

It was a similar story when it came to the rake of the transom. I allways knew that it was a bit jaunty in the spirit of Tommy Sopwith but unfortunatly i also realised that it wouldn't take an outboard very easily, this coupled with the opportunity to increase the water length and add some extra buoyancy prompted a couple of nudges of the stick until it looked right.

Any project manager will tell you their biggest pain is ever changing requirements, and this is beginning to happen here, and I'm afraid some of the original design criteria are drifting away. As I sit dreaming of sailing on soft summer days and possibly camping out on some sandy strand I'm losing the simplicity of the original concept by adding a little here changing a bit there, somewhere along the lines I added a fairly large locker under the foredeck which was then extended aft to accommodate it. Maybe its time for a re-think or maybe there are actually two boats trying to get out here?