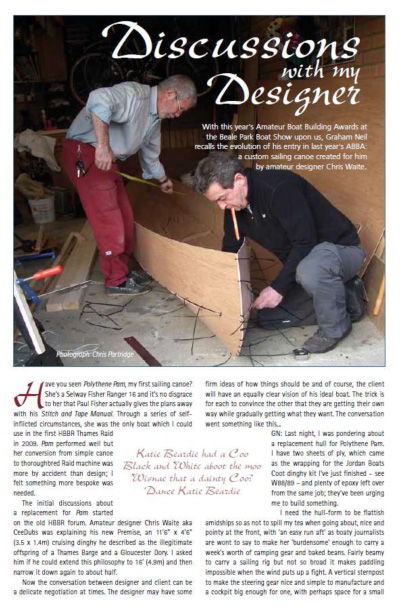 Katie Beardie finally made her debut in The Press today.
Almost a year ago, at the 2012 Beale Park Boat Show, Pete Greenfield illustrious editor of Water Craft magazine asked when he'd get an article about Katie who was sunning herself a few feet away in the Amateur Boat Building Competition.  Probably like most men of letters Pete is a man of few spoken words. He just throws in the odd challenge or comment now and again and waits to see what happens.

I have made a couple of contributions to Water Craft in the past, a couple of rally reports, a product review or two and an expose of the Coot's fit out, and I have to say it does my ego no end of good to see my name in print.  This time I have to confess that at least half the words and most of the inspiration came from my good friend Cee Dubbs. There we are in the picture above trying to find the lost inch, or was it the extra mile?  I'm the one sucking his pencil. 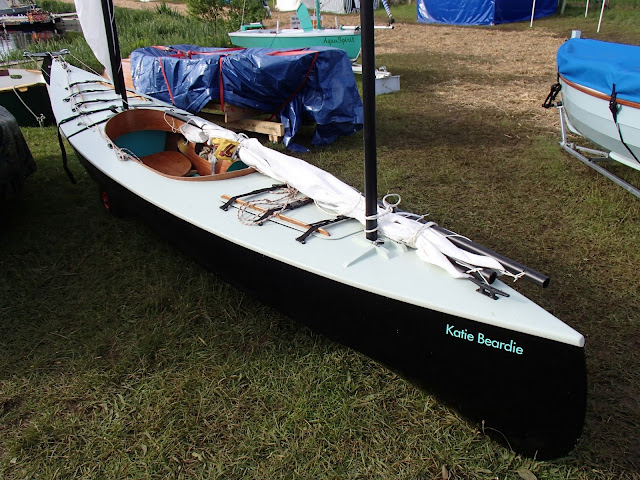 The article was an attempt to convey the discussion we two had on the HBBR Forum over her original conception as a design. Sadly most of the best jokes were edited out as it was felt our foreign cousins might not understand the references to popular culture outside the UK.  I hope it still remains a tale worth telling.

You can of course read the full story by purchasing the latest edition of this great magazine. Available at all good news-stands or at watercraft-magazine.com 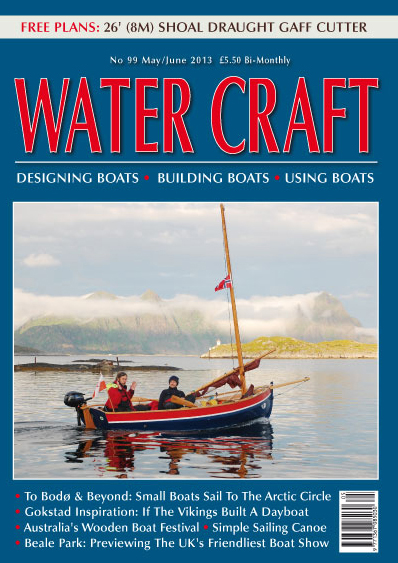 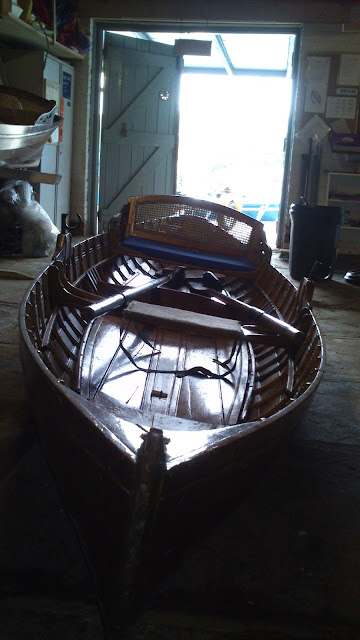 Today was commissioning day down at the Ancient & Vulnerable St Deny's Sailing & Rowing Club,  This traditionally marks the start of spring when all the boats are made ready for the new boating season. Nowadays its more of an excuse for a spring clean. 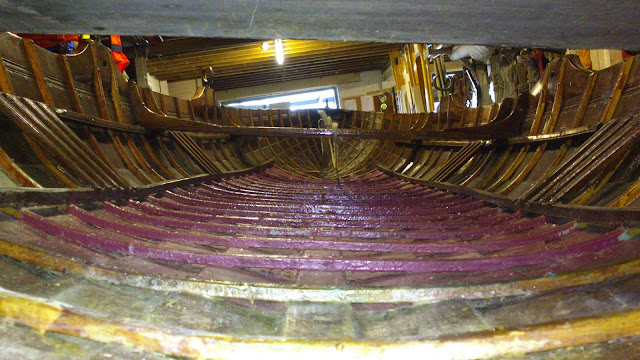 There was a good turn out of the usual suspects lending a hand.  Mavis was getting her nooks and crannies cleaned out before yet another coat of varnish. All the detritus was swept out of the Boat House, including the flotsam from a couple of very high spring tides which can reach the back of the shed. 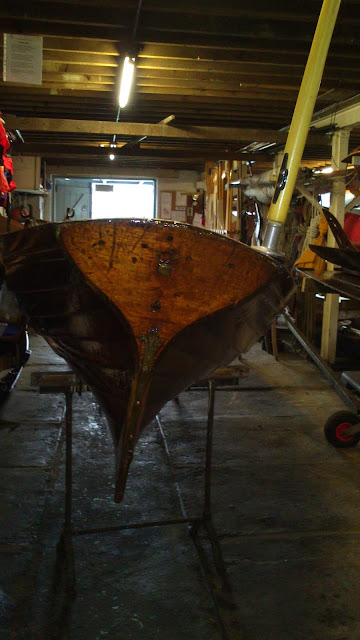 The Slipway was pressure-washed of all its slippery muck, we even cleaned the loo. The sun came out and for the first time this year I felt its warmth on my back.
Thoughts and conversations naturally turned towards this seasons boating, in the anticipation of fine weather. 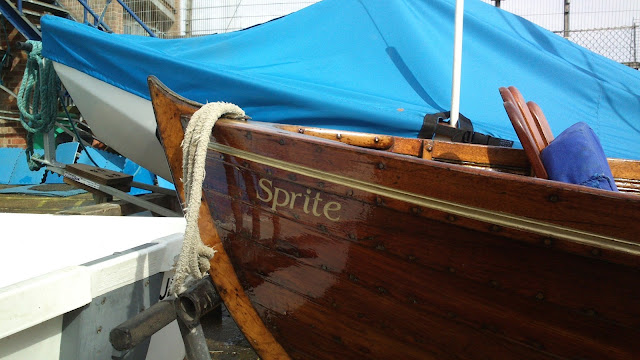 If Your Mother Comes From Buckie 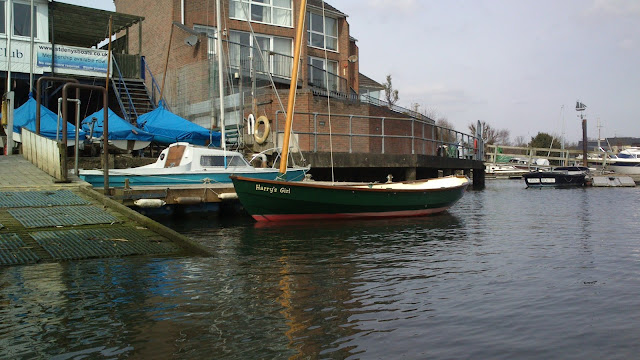 Dory man commented on the last post that The Scaffie looked quite Doryish. I'm quite sure he knows full well that she is far from being Doryish below the water line and much closer to her Shetland Yole cousins.

The Scaffie in fact hails from the north east corner of Scotland along the Moray Coast.  Like the Shetland boats the Scaffie is double-ended with a curving stem and a straight stern post.  She also has a deep straight keel with deep bilge keels to keep her on the straight and narrow. 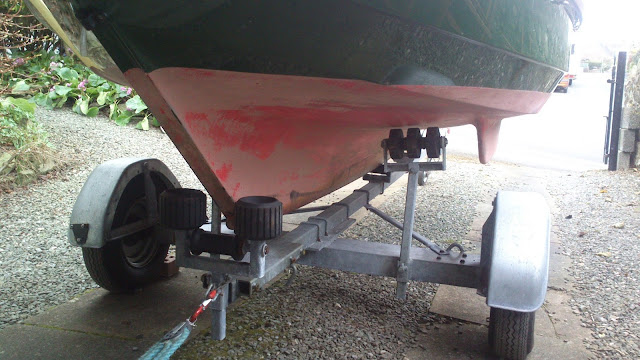 There isn't a centreboard, which leaves the cockpit uncluttered. There are a couple of removable thwarts for rowing with two rowing positions, and there's a well which solves the perennial problem of how to hang an outboard on a double ender. 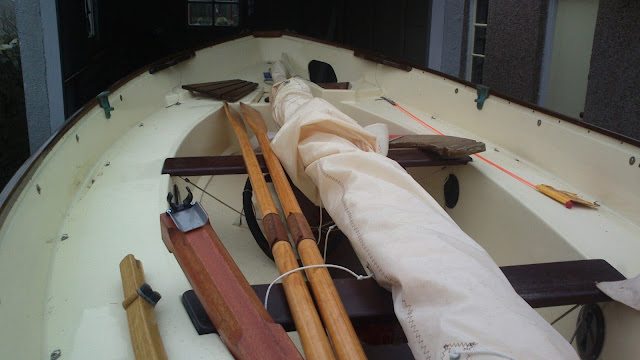 The original Scaffies were built anything up to 60ft long and were used along the Moray Firth for long lining and herring netting. So these modern GRP versions are really very small in comparison to their predecessors.

The rig is a loose footed, high aspect standing lug on an un-stayed mast.  Very quick to rig and safe to handle.  I'm told that getting to windward can be a bit of a challenge though.
Here's an image from the Churchouse Boats Drascombe web site of a Scaffie under sail.

So, although we're not sure who Harry was his Girl has spent much of her time down in Devon, but her ancestors definitely come from the North East.

So altogether, to the tune of The Road to the Isles;


If your mother comes from Buckie
You should think it very lucky
If you've never done the tango w' the piles. 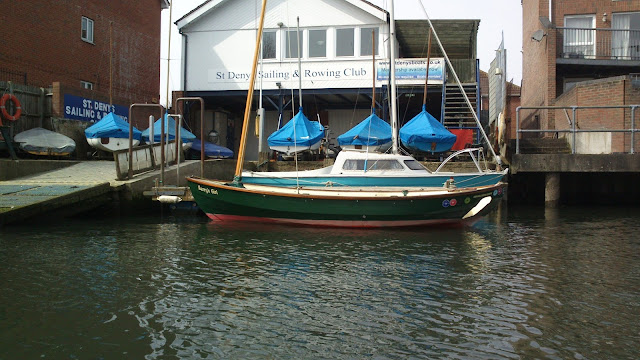 There is a new addition to the fleet down at the Ancient & Vulnerable St Deny's Sailing and Rowing Club. Harry's Girl is a  Scaffie built by Honour Marine and was bought to replace the 14ft Gaffer we sold at the end of last season.  Club Captain Bill and Committee member John drove down to Salcombe in Devon last Friday to bring her back.

The thinking behind buying a Scaffie is that she should be quick and easy to rig with her un-stayed mast and balanced lug rig, which is a bonus for getting under the three bridges between us and open water.  She comes with a good trailer and outboard so I'm hoping she'll see some action at Drascombe Association Rallies and the like.
at April 09, 2013 2 comments: