Shut up and take my Money!

Its hard to believe that it is now fifteen years since I bought my first boat trailer. 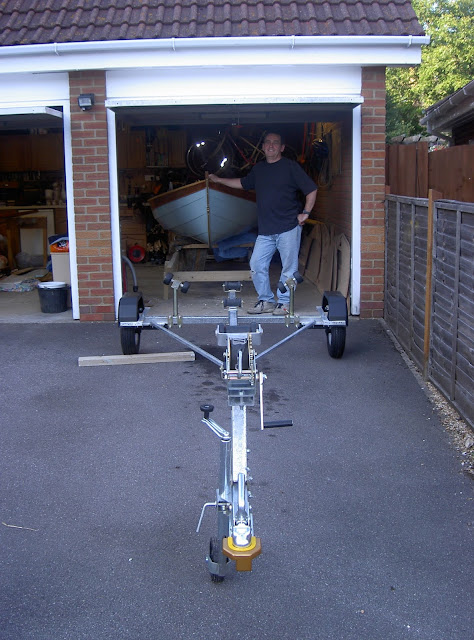 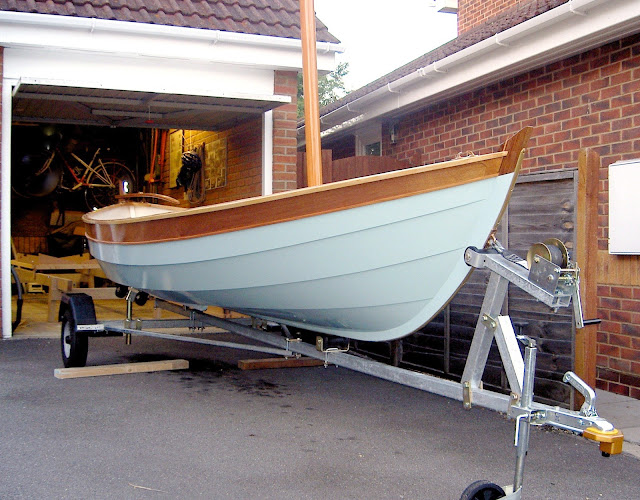 I was just finishing Caitlin the Iain Oughtred Whilly Tern and found a chap in Christchurch who would custom build a trailer to my spec for a very reasonable price.
I didn't really know much about trailers at the time, looking at it now the axle was a bit too far back which meant the tow bar weight was quite heavy and of course the bearings had to be submerged before I could launch or recover the boat, which isn't a good idea. The whole thing was bolted together so it could easily have been adjusted, but I have to say it towed like a dream behind the little A Class Merc we had at the time. 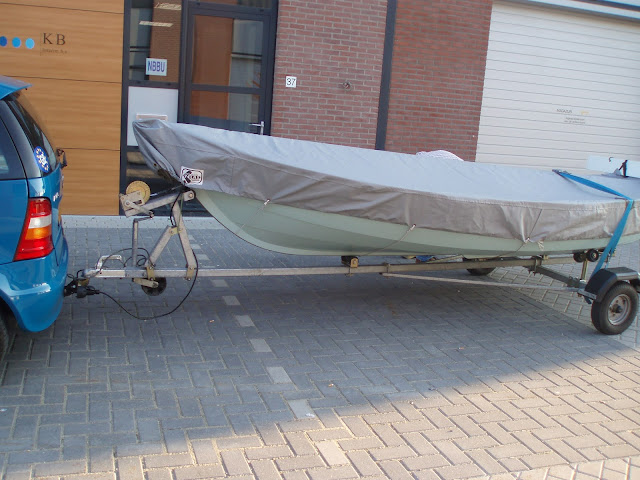 In fact we towed it all the way to Amersfoort in The Netherlands when I sold the boat. Wilhelm had flown over to Southampton to try out the boat and bought it on the condition that I delivered it as he didn't fancy doing the long trip himself.

He further explained that he didn't want the trailer as all trailers in The Netherlands have to be Type Approved with all the necessary certification that goes with that so he couldn't use mine and would have to buy one locally.

He was a bit surprised to learn that technically we in the UK could bolt a couple of old bed frames together and so long as it wasn't going to fall apart use it quite legally on the Queen's Highway.

He was keen to have the boat and I was keen to make a sale so we came to an agreement so my wife, daughter and myself headed off on a road trip to deliver the boat to its new owner combining it with a weekend visit to Amsterdam.  At Dover the French Customs Official leant out of his booth and declared she was indeed Un Joli Petite Bateau.  We hauled on across busy Belgium roads and finally arrived a couple of hours late at Wilhelm's trailer supplier to transfer the boat onto its new set of wheels. 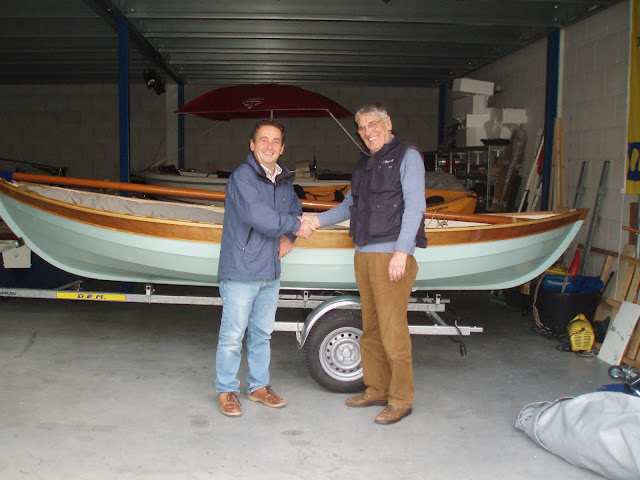 And what a set of wheels they were, you could have launched the Bismark off that thing, but he seemed happy and so was I.

The coda to that story was when we returned across The Channel and landed at Dover the British Customs Official pulled us out of the line and interrogated us on why we were towing an empty boat trailer. I was tempted to cry "Oh God where's the bloody boat" but thought better of it, she didn't seem the type to appreciate that kind of humor. I think she thought we were trying to smuggle duty free trailers into the country. Give me the French any day.

I eventually sold that trailer to a chap in Norfolk who I never met, he phoned me, paid on-line and sent a courier van to pick it up while I was at work. Its a funny old world the International Boat trade.

The next build was The Coot and as she drew close to completion I was looking out for something suitable when through happy happenstance just the right thing came along at the right time. The Ancient and Vulnerable St Deny's Sailing and Rowing Club had been on the look out for a couple of Lymington Scow's and one had been found quite a distance away.

El Presidente went off to fetch it and by the time he had dragged it home to the club he loudly declared that the boat was fine but the trailer should be condemned as an old boneshaker fit only for the scrap heap.

I duly inspected said boneshaker and found, underneath the blue paint a fully galvanized combi- trailer just the right size for the wee Coot. 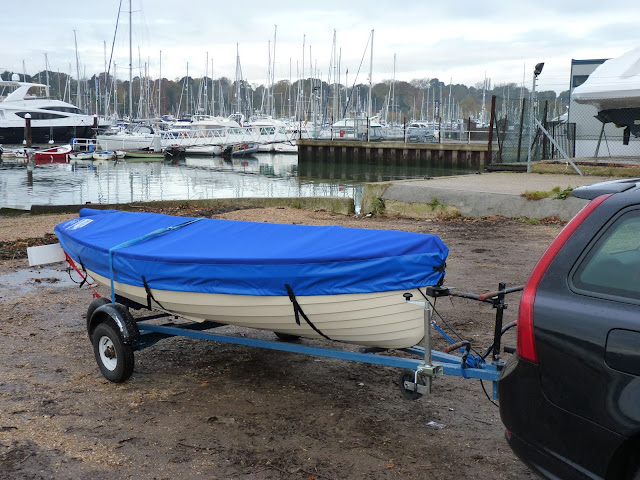 I offered them fifty quid which they accepted and I towed it home. I eventually replaced the wheels and tyres, greased up the bearings and shimmed up the launch trolley wheels whose rattling on the road had caused all those bones to shake.

Being a combi-trailer with a separate launch trolley  meant that the road wheels never went near the water.  It had a transverse cart spring meaning there were no moving parts and no rubbers to perish.  Once I had sorted out the balancing issues by moving the boat back so that the nose of the launch trolley was light as a feather she was really easy to manhandle ashore, but still towed really well, this time behind the Volvo. Ooh I loved that Car.

She got a coat of silver Hammerite paint to spruce her up and when I sold the boat off to Devon her new owner reported that she'd towed like a dream all the way to the River Dart, and as far as I am aware she's still going strong. 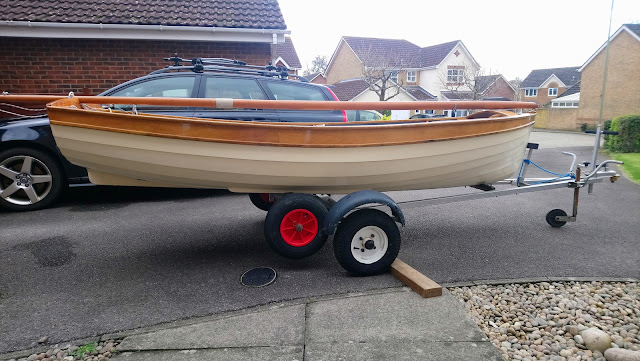 Finding myself boat-less once again I bought the little Heron as an in-betweener while I built the Morbic. I didn't realize at the time just how long it was going to take to complete the next build but hey ho.

The Heron came on a very nice little combi trailer with bald tyres.
It is a fact that it is cheaper to buy new wheels complete with tyres than it is to have a new tyre fitted to an old rim.

I now have quite a collection of trailer wheels compete with bald tyres.

Not long after that I swapped the Volvo (Oh I loved that car) for the VW Transporter,
(Oh I love that van), which meant the canoe Katie Beardie needed to travel on a trailer as there is no way she's going up on the roof.

So I modified and extended  the Heron's Road base to take Katie.

You can read about it here. 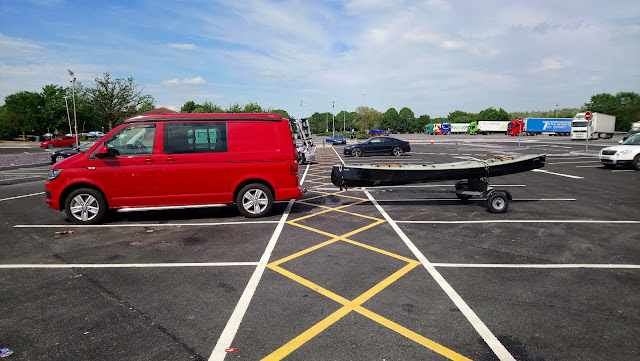 Coming up to date the Morbic is nearing completion. Well near enough to be ready for a trailer of her own.

From the little bit of experience I have gleaned over the years here is my take on what is needed.

A well thought out and balanced trailer can make a huge difference to your sailing enjoyment. I have watched too many old men struggling to launch or retrieve their boats from ill fitting or badly designed trailers.
The first consideration is where and how the boat will be used.
I'm assuming here that the reader will want to tow their boat to and from the water.

If you always launch from a slipway with vehicle access then you could get away with a simple road trailer, just an A frame or a T  with a couple of rollers is all you need. Some of the trailers built for those dreaded Personal Water Craft could be very useful. They usually have plenty of rollers and are fully adjustable. The key thing is not getting the bearings full of salt water.

Every springtime you see boats keeled over on their trailers at the side of the road. The boat was hauled out at the end of last season, with the bearings full of brine and It's been left standing all winter, now on the way to the slipway the bearing has seized.  If you cannot launch without the bearings getting wet fit a pair of bearing buddies and let the bearings cool down before dunking them in the water. I know a chap who we will call Wayne, because that's his name, who had two sets of bearings one for the water and one for the road which he swapped before launching his boat. It should also be said his majestic craft was carried around on an equally majestic trailer, hugely over engineered and immensely heavy.  He couldn't recover the boat on his own, it usually took a Rugby team.

If you can't or don't want to use your car to launch then you need a combi trailer. The launch trolley sits on top of the Road Base so the road wheels and bearings never go near the water.    This is my preferred option.

I've been hunting around for a suitable trailer for the Morbic12.
I've looked at what is available from the usual trailer manufacturers, and I have to say the choice is slim. It may just be that as usual people who are good at making things are lousy at marketing but I found very few options.

As I've said getting a trailer which fits the boat is vital for maximum boating pleasure and minimum visits to the Chiropractor, and I had nailed it down to one or two options while keeping an eye on the secondhand market.

I found one on flea bay not too far away and the chap could have had a sale if he'd been a bit sharper about answering my enquiry but no, he tarried them blamed me for ignoring the message he didn't send. See its all in the marketing.

Then I found this on a Dinghy Bits FB page. 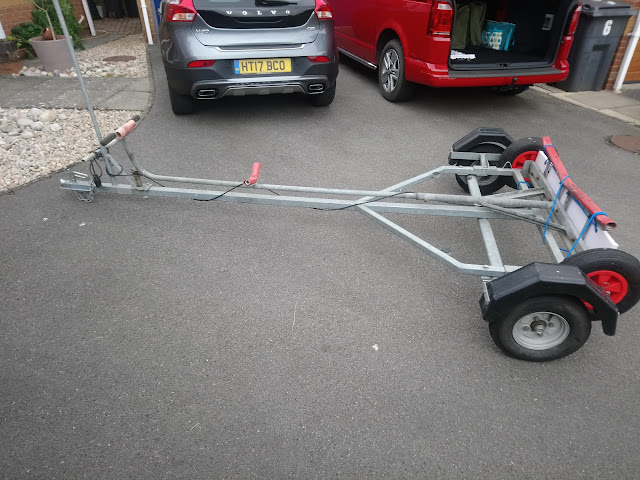 I messaged the man and he was quick to respond, turns out he was only five miles up the road.  He was working from home because of the dreaded lurgy and could fit me in between his Zoom meetings that very afternoon. 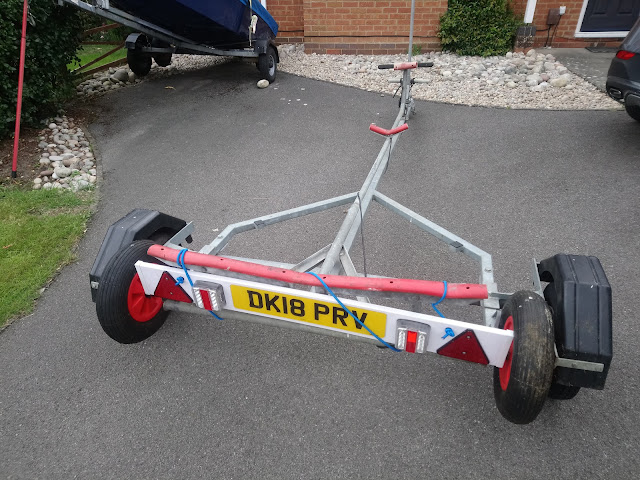 Its the right size between snubber and the balancing point so the handle weight isn't too bad.

It has new wheels and tyres on both the road base and launch trolley.

The bearings are smooth as a smooth thing and no play.

The galvanizing is intact with no signs of rust anywhere. 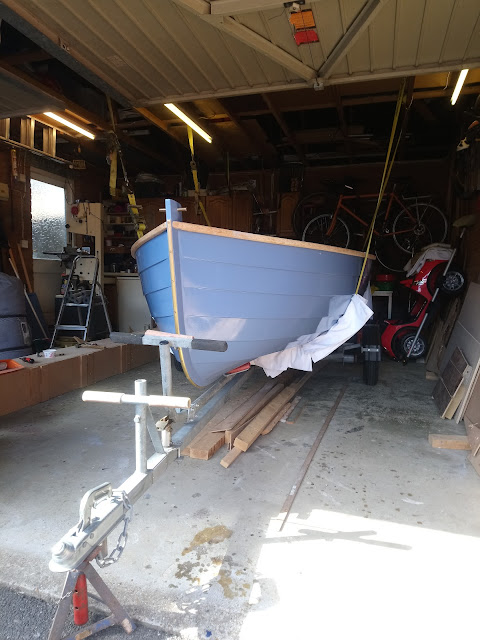 And here is the Morbic being gently lowered onto her new wheels.

Just another small step towards getting her on the water.